I love trains.  They’re a comfortable and fun way to travel, not to mention much cheaper and greener than flying.  And unlike flying, you get to see stuff while en route.  There’s a great website for train travel that I’ve used in China, India, and throughout this trip: seat61.com.  It’s written by one dude whose job I envy and is chock-full of details and travel advice.  I may use it more than Lonely Planet, even.

Our train to Kuala Lumpur left Singapore a taddd early for my tastes – we were at the station by 6am if I remember correctly – just to make sure we had plenty of time for check-in.  We did.  Ahem.  We also had time to check out the cafeteria, where I got this clever coffee-in-a-bag.

The Singapore station is small, easy to figure out once inside, and in a very cool 1932 art-deco building.  It will be closed down in June 2011, after which getting to the northern Woodlands station will involve a shuttle bus – yuck.  So we made it just in time! 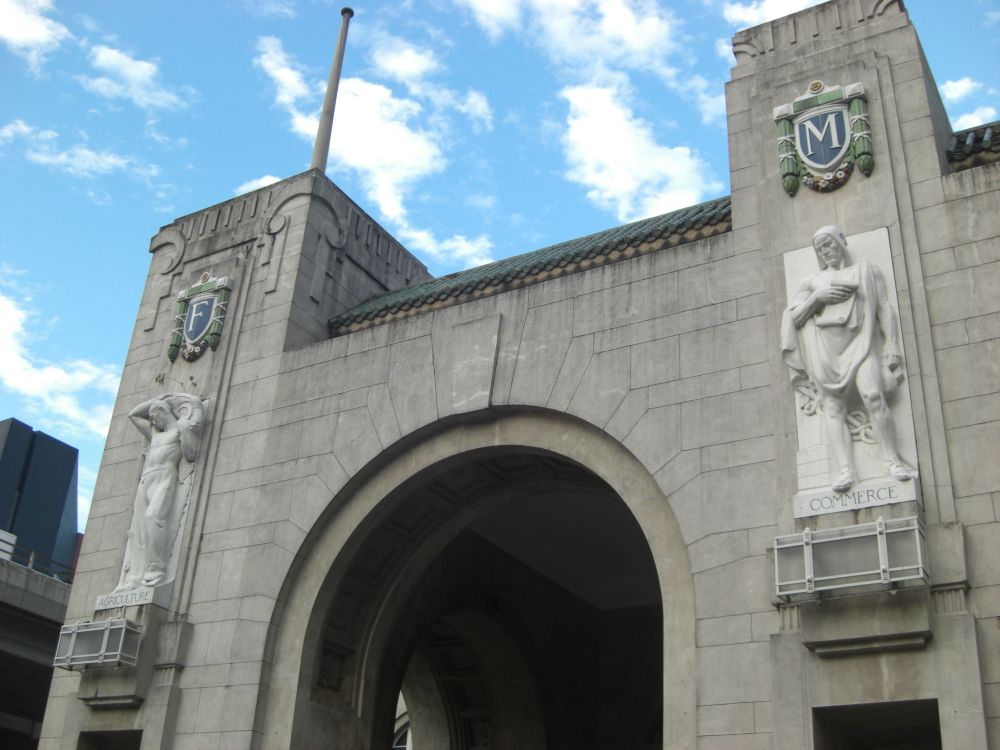 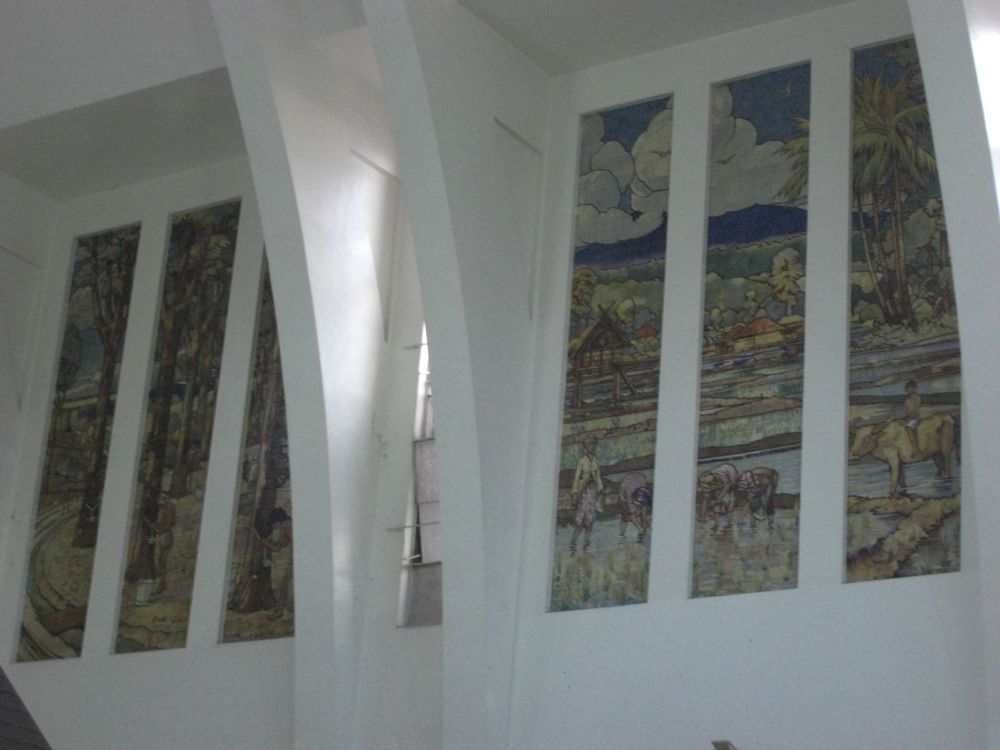 The train was nice enough, clean and comfortable.  A 7-hour ride = a good opportunity to nap, read, write, or stare out the window.  We passed crazy numbers of thick palm tree plantations, and lots of hilly landscapes covered in green.

The highlight, in my opinion, was this unassuming little breakfast.  The cart attendant offered us Western-style bags of chips or snacks from the bottom of the cart, skipping over these closed styrofoam containers.  I asked what those were, and the attendant seemed surprised when we took two.  We loved them!  Banana leaf on the bottom, rice, cucumber, hard-boiled egg, and a delicious spicy sauce with peanuts and tiny dried sardines. 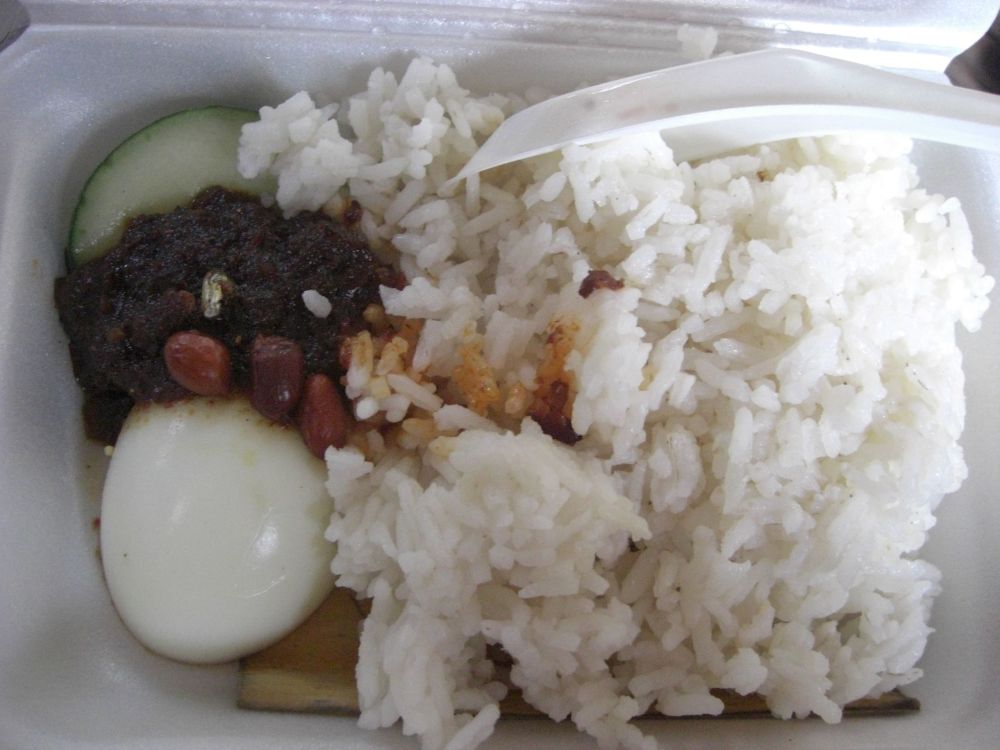 Singapore is known for its lack of crime and, um, hard-line stance on many issues.

Looks like Malaysia took a tip or two from them! 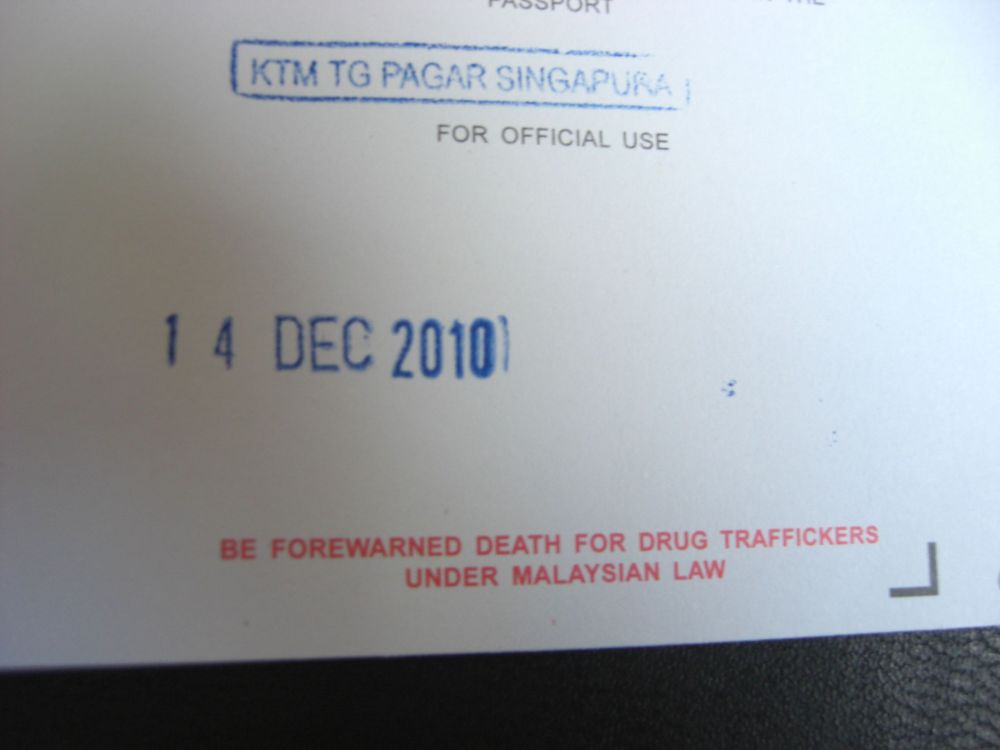 I snapped this from the busy lavatory at the Malaysian immigration office.  Most public places (at least those I checked out, which were few) have a Western-style toilet or two, and then several squatters.  Looks like the newfangled ones require a little toilet training!  Come to think of it, I did notice a few seats with really worn spots…

Once we arrived at the large and modern KL-Sentral station, we went to the ticket counter to pick up our next set of tickets, and were impressed with the courteous and quick service in good English.  Then we tried to figure out where the KL Monorail was.  Soon it should be connected to the train station, but for now it’s down several levels, around several turns, and across a busy street.  Verbal directions did not help as we couldn’t keep track of all the turns.  Soon someone on the street helped us out and walked with us all the way.  Two for two!  The third Malaysian we encountered, though, the ticket-seller for the Monorail, was less than impressed with the speed with which I pulled together 4 ringgits (about $1.36 for 2 tickets), so she asked me for another bill after the transaction was complete.  Confused because I had given her exact change, I tentatively handed it to her.  She pocketed it and then went on to help the next person.

Ringgits – a funny word.  Seb couldn’t remember it and called it “ramekins” the whole trip.

The ride was packed, but smooth and very scenic.  Great views of the city.  We exited at Bukit Nanas and walked a block to the Renaissance, a huge and very modern Marriott property, with views of the Petronas Towers right from our room.

Hotels in this part of the world differ from those back home in one small detail.  I think we saw a bible or two during our trip, maybe even a book of mormon, but many rooms also had this clever pointer toward Mecca.  This one was on the ceiling; in another hotel we saw it inside a desk drawer. 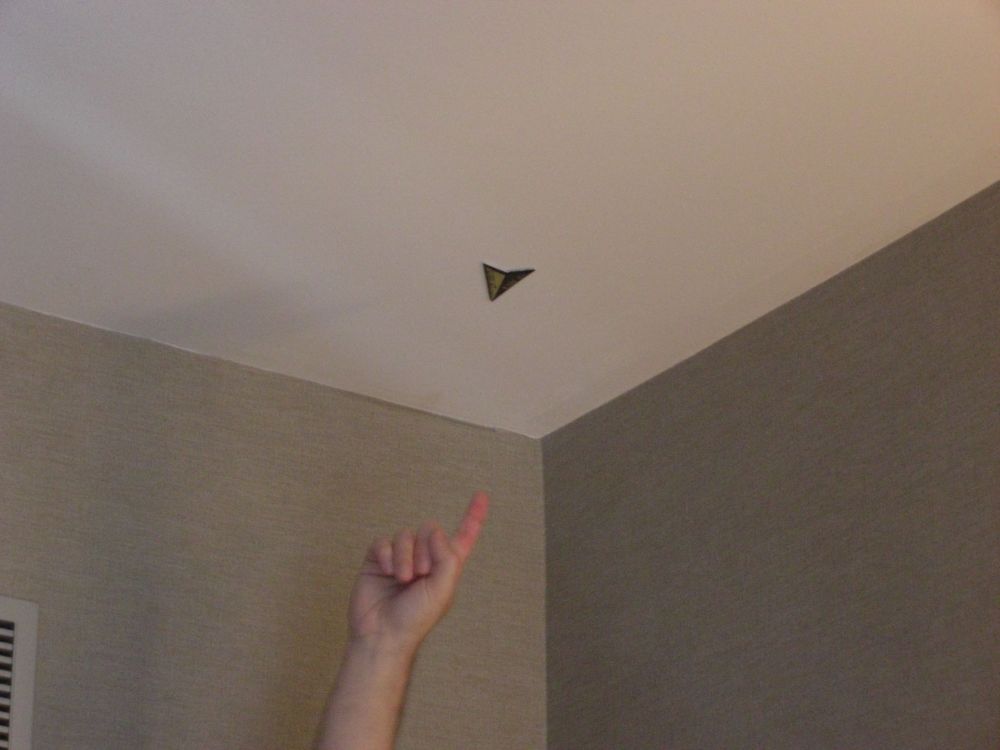 We went out to explore, focusing on the area around the towers just a few blocks away.  We found the city to be modern, clean, and organized.  While we were walking through this park, one of the mosques played their 5-times-daily call to prayers.  Seb disagrees with me but I think that sound is so pretty, I love the way they sing.

I’m kidding, of course.  They’re there to help.  Lonely Planet says Malaysia is “one of the safest, most stable and easiest to manage in Southeast Asia.”  Even the sidewalks were helpful – very wide, hand-laid with stone squares, and covered with etchings to point out hazards for the blind.

The only thing we were warned about was handbag-stealing motorcyclists.  It’s not just the stealing part that’s bad, it’s the broken bones and sometimes fatal dragging of the women holding on to those handbags.  Men are supposed to walk on the outside of women so they are not close to the street, and women should be conscious of which arm is holding the bag.  I felt like not a very prime target as I carry a bag always criss-crossed over me.

Speaking of tourist “polis”, we chuckled at lots of Malaysian words that are phonetically English, like tiket kaunter, teksi, kupons, and feri.

As usual, my favorite part – the food!  This part of town is known for excellent (and pricey) restaurants, but we headed instead for a Lonely Planet recommendation: great street food served in open cafeteria-style eateries called “hawker centers” or “mamak” restaurants.  This one was called Nasi Kandar Pelita, just outside the towers.  Very cheap and very tasty!  The naan was out of this world – we ordered a second platter after devouring the first.  Seb ordered curried chicken and for me, curried fish.  (Again with the fish!  Obviously I’ve been missing my seafood while in Congo…)

The towers at night – just beautiful.  Unfortunately we were too late to go up and tour the skybridge.

The next day we toured the city on foot.  First stop, the Menara KL, a communications tower with the highest observation deck in the city.

In the distance in one of those limestone hills were the Batu Caves, home of the annual Hindu festival where devotees drag huge objects using only hooks in their skin.  I would have loved to go hike the 272 steps up, and see the world’s largest statue.  In fact, there was something that looked interesting to explore every direction I looked. 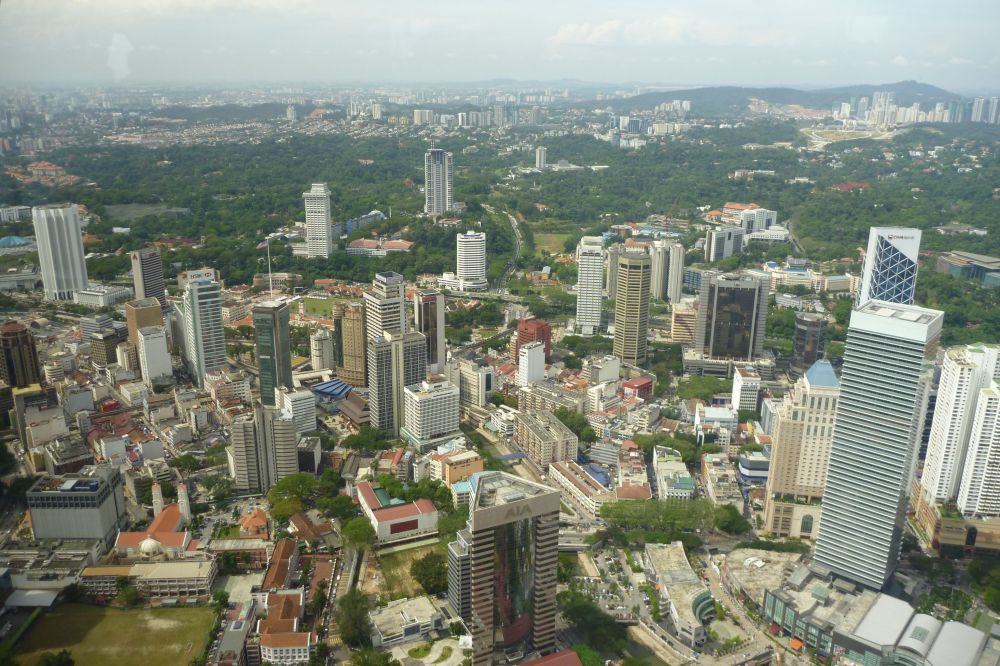 The streetscape outside the entrance to the tower.  Just like in Singapore, Christmas references everywhere!  We particularly liked the snowmen, obviously a very exotic idea in this tropical climate.

Also like Singapore, Malaysia is a cultural melting pot.  We stepped inside a convenience store once and wondered if it was odd that veiled women were working there while Lady Gaga and Katy Perry music blared overhead.

Next up, we headed towards the Colonial District to see the architecture, passing through Little Nepal on our way.  Street food everywhere.  We grabbed a deep-fried snack from one vendor, costing a few cents.  Delicious!  Everything we’ve tasted so far has been spicy – not just in terms of heat, but also flavor.  It must be so disappointing, food-wise, for folks from these parts to go on holiday somewhere kinda “bland” like Britain or the States! 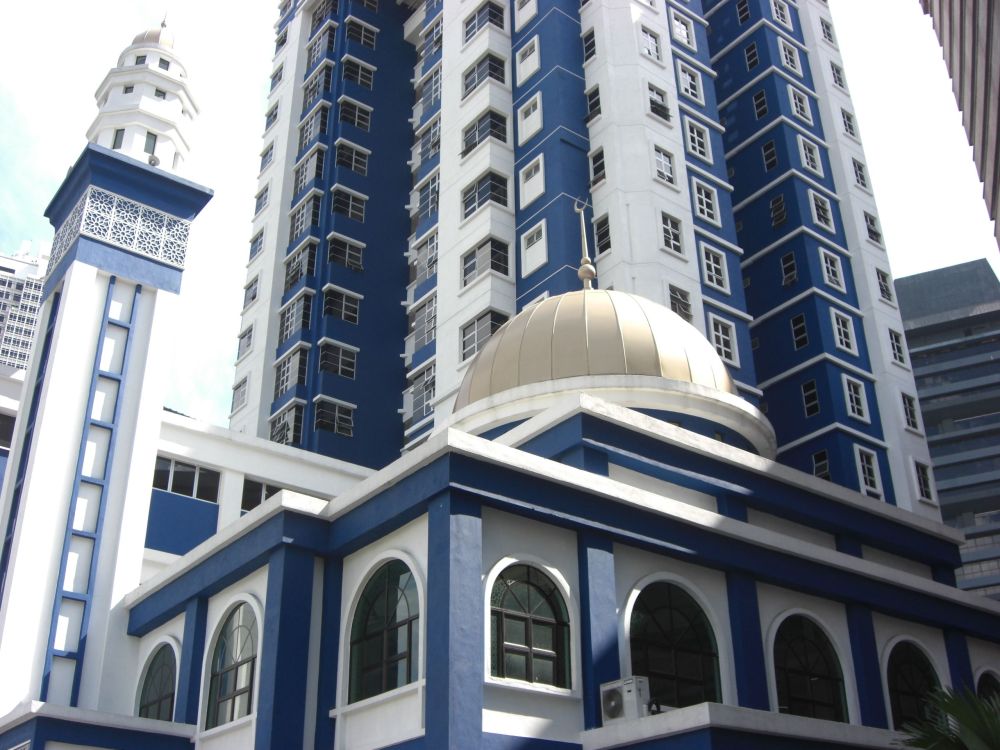 Though there was much left to explore, it was time to rest tired feet at the pool back at the hotel.  Tomorrow morning, another early train ride.  Two nights is not enough!  Kuala Lumpur is a city I could easily spend a lot more time in.