So five years ago today we moved into our little base camp bungalow here in the bush. If you’d told me then we’d be staying this long, I would’ve never believed you. It’s quite possible I would have talked myself out of it. I certainly would have had a much different conversation with our now very-long-term cat sitter. (God bless you, Rob.)

It’s been a year of unusual highs and lows. Along with our stock price I hit a personal low this year, though for me it was somewhere in the middle of rainy season. I never revealed all the reasons why, other than our dwindling social group and my sour mood, probably because the events were too fresh and perhaps politically incorrect to talk about. I still shouldn’t go into too much detail but I’ll share with you the highlights: someone or some group had repeatedly helped themselves to, shall we say, “relieving” us of several of our more lightweight electronic possessions. We only discovered it after looking for something specific that had been stored away in a drawer or closet somewhere. When all was said and done we lost about a dozen objects, over a period of months. (By the way, we set up a little “test” for our maid; it definitely wasn’t her.) Around the same time but for unrelated reasons, I fired our gardener. That was hard, something I never wanted to have to do. I felt guilty. And a little bit paranoid. So when the dark and drab days came along and then the government decided to remove internet access from their citizens (including me) for what turned out to be 21 days without any idea when it was going to end, I’d had enough. I really thought it was time to come home.

But all things pass. The internet eventually returned, as did the sunshine. Good people and good wine help too!

On the plus side, there have been a lot of nice improvements this year. The company started a new direct flight to Johannesburg in February, which we were quick to take advantage of. I started a new and very upbeat English class in April, and another new project keeping me busy that I can’t tell you about yet. 😉 We got new neighbors in July, who are super fun. The new grocery store we got in March last year is still going strong, even if it also manages to lighten our wallets and increase our waistlines. When the government stays out of it, the internet works — with limitations, but it works — most of the time. One of my favorites: Last month our house was finally connected to a generator. Hooray, no more long power outages for us!

The best news? A few weeks ago, Seb got a phone call from the owner of a computer repair shop in town that his long-lost brand-new iPad Mini had been brought in, displaying an “I’m lost!” message and Seb’s phone number. It was locked, of course, having been reported stolen nine months earlier. If anyone had tried to connect it to the internet, it would have erased itself automatically, James Bond style. No one did, though, the entire nine months. (And I think our internet and electricity is bad.) After being taken from us, it was apparently passed to the person seeking repairs as repayment for a $400 debt. A few police officers and investigations later, all signs point to the source being our former gardener. Hooray, Seb’s got his iPad back, and I have no need to feel so guilty anymore!

This year was also filled with some really fun trips. I took my third intense French course at a mountain monastery in Provence last September; we couldn’t get enough of the fantastically fresh street food in Vietnam in December; we pushed ourselves farther than we thought we could go in the mountain kingdom of Lesotho in April; and we more than enjoyed getting fat & happy visiting friends in Poland in June.

I still plan to write about those trips in more detail, as I promised… someday… but in the meantime, I thought I’d continue the tradition of commemorating another year here with some of our more “miscellaneous” moments right here in the DRC.

Sept 2014: Practicing for the upcoming potjie competition at a friend’s house.

Seb made a new friend at the office, scaring the pants off every Congolese who came near. (No idea why they’re afraid of harmless little chameleons, but they are.)

October: Our doctor (and resident herpetologist) giving a lecture about all the types of snakes around these parts, many of which he’s kept in his freezer. 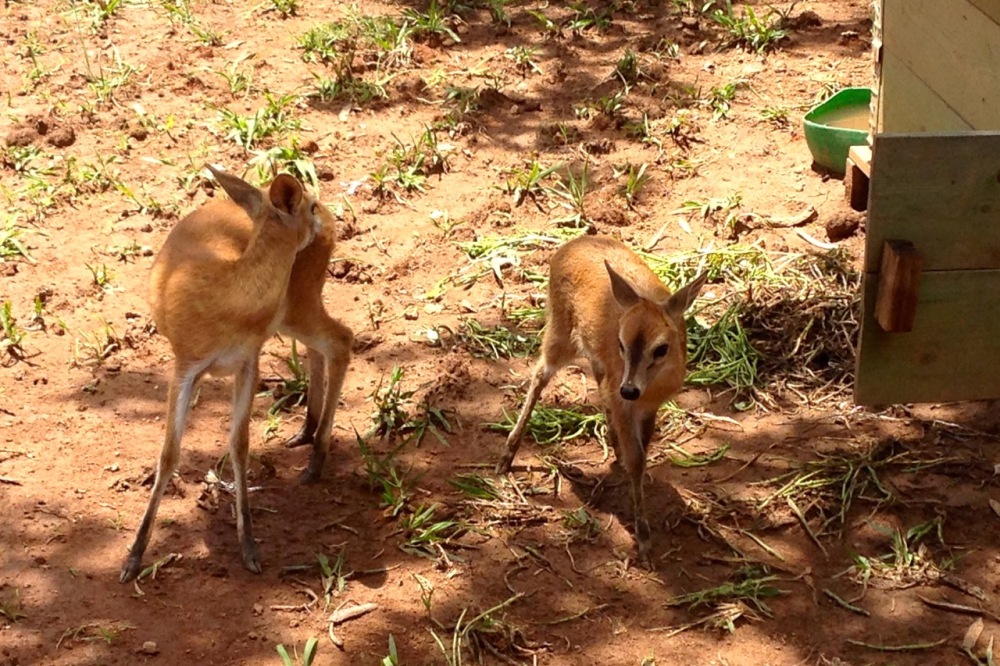 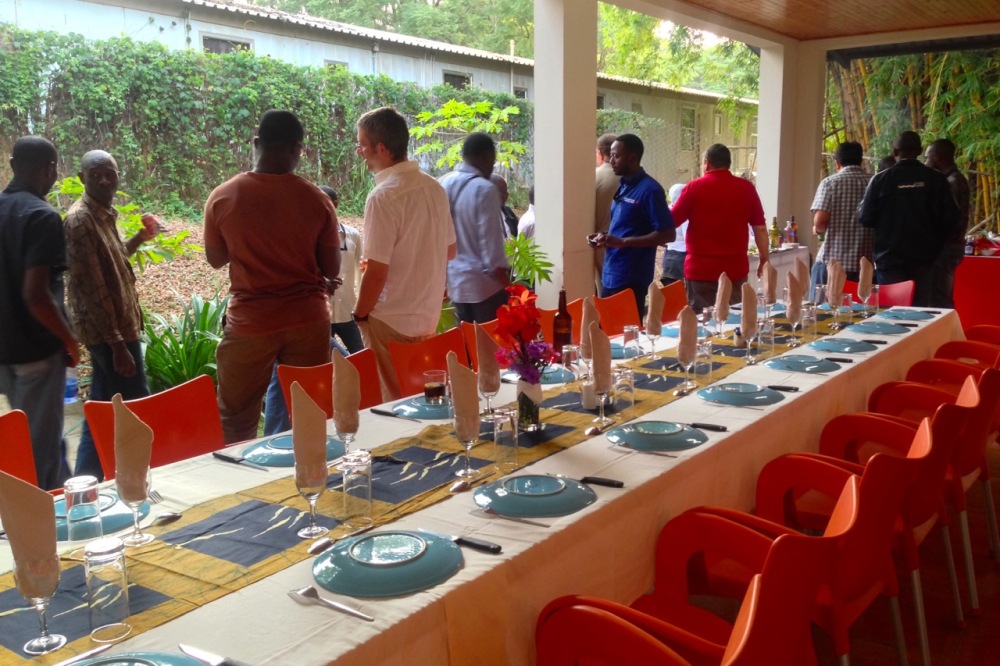 January 2015: A new year’s kickoff dinner for Seb’s team on our back porch (catered, thankfully).

February: After an all-morning power outage, resorting to making my coffee over hot coals.

March: A never-ending pit of malachite, mostly dug out by artisanal miners.

April: Cat-sitting for a friend; Zawadi looking on jealously.

May: One of the pits getting deeper every day. Aided in part by the nightly trail of artisanal miners, as shown by the white foot path above. 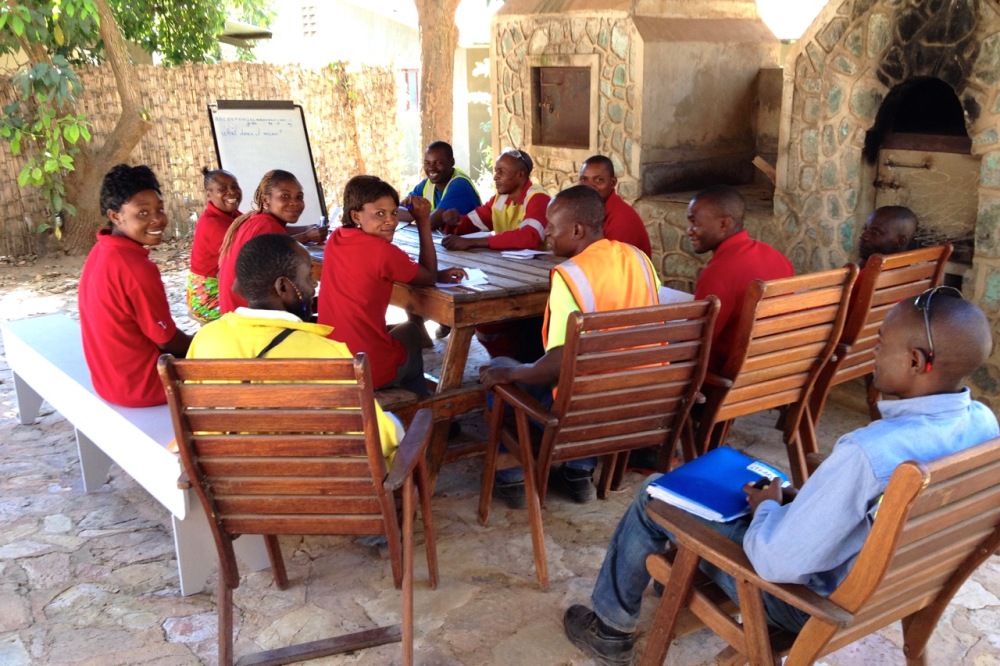 June: While I’m in Poland, Seb nabs a photo of my English students hard at work, practicing under Josephine’s tutelage. Notice the white bench one of the students built voluntarily because our class of 22 was too big for the space. I love these guys.

The geology department soccer team, showing off their choice of a very exotic mascot: the bears.

Guinea pigs who double as “donors” for keeping the company’s lab mosquitos fed. The mosquitos are tested regularly for their resistance to different malaria treatment programs.

Core boxes from the 1970s. Core must be stored for the life of the mine! Seb’s constructed much more modern warehouses for core these days.

August: The stoplight robot man in Lubumbashi. He’s supposed to move like a traffic cop, but I hear he’s… broken.

Hosting an Ethiopian dinner party for new friends. We really do have furniture, but this is much more authentic. 🙂