Arrival in Chiang Mai.  We depart the train station and walk to a nearby hotel where we meet our tour guide and driver, who are taking us on a two-night eco-tour to the “hill tribes” north of the city.  But first, we stop at a couple of sights within Chiang Mai.  These are not on the itinerary, so we’re a little surprised.  First stop, an orchid garden.  They were certainly beautiful, but we didn’t find much need to stick around too long.  Plus, the souvenirs were expensive.

Next, Tiger Kingdom, where we could purchase a pass to lay around with the tigers and be photographed with them.  We talked it over while we had lunch (where incidentally I discovered a new favorite, Green Papaya Salad.)  We decided the tiger thing wasn’t worth the money, plus it just felt wrong, frankly.  The tigers looked drugged and lethargic.  How could it be natural to take photos with them?  We picked up a brochure on the way out (tagline Touching The Real Tigers: They are not aggressive as you think) which explained that the tigers are not drugged, they are just sleepy!  They’re nocturnal, which makes them naturally unaggressive during the day.  But I wonder what the heck they think about people tugging on them and pulling them around for the perfect shot while trying to get some shut-eye. 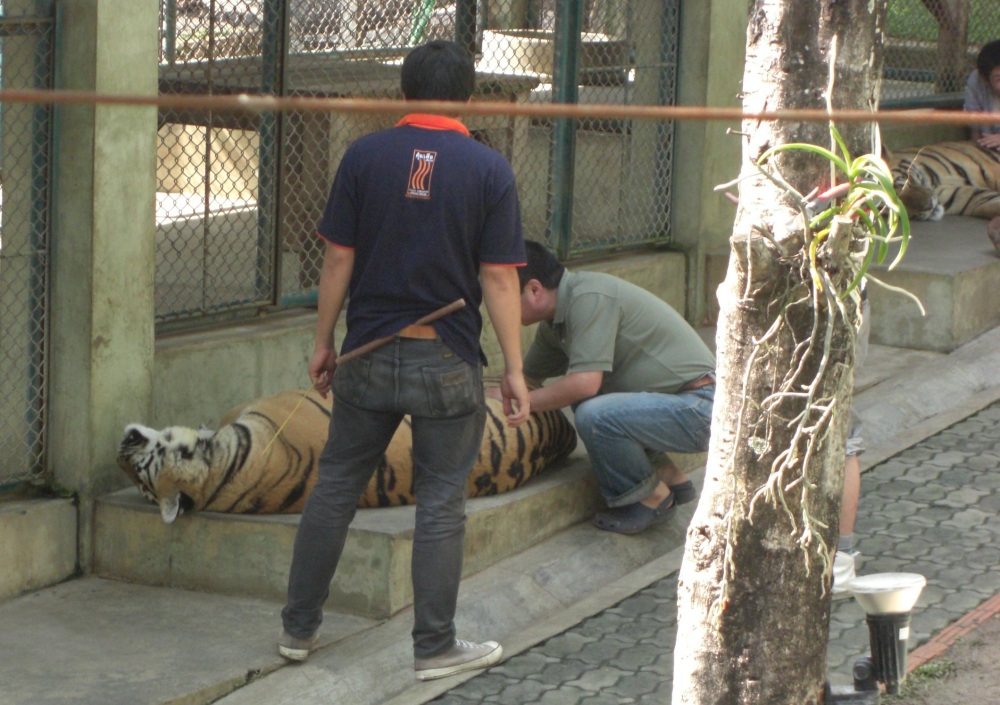 The brochure answers my question.  They wake the tigers up during their snooze because, of course, there’s a market for the photographs.  “What the customer wants they usually get!  It’s the same story in every business in every country!”  Oh, and without the customers, the tigers would starve.  There’s the food and vet bills, after all.

Ugh.  Temper my snarkiness with the fact that I love cats.  I would love to snuggle with a huge lion or tiger.  And I’d love to get a photo of it.  But when faced with the opportunity, honestly, it just didn’t seem right.

So, we left Tiger Kingdom, our tour guide surely disappointed that we hadn’t yet dropped any baht at either stop so far.

We head northwest for the part of the tour we’d actually signed up for, exploring the hill tribe villages outside the city.  We drove for what seemed like forever.  The route was beautiful, the road curvy, the driving fast.  Passing is permitted going around a curve, uphill.  Nervewracking.

Most of the route except the last hour or so was smooth blacktop, in very good condition.  We did make a couple stops along the way – for gas, for a short hike, for a bathroom break (boys only – sooo not fair). 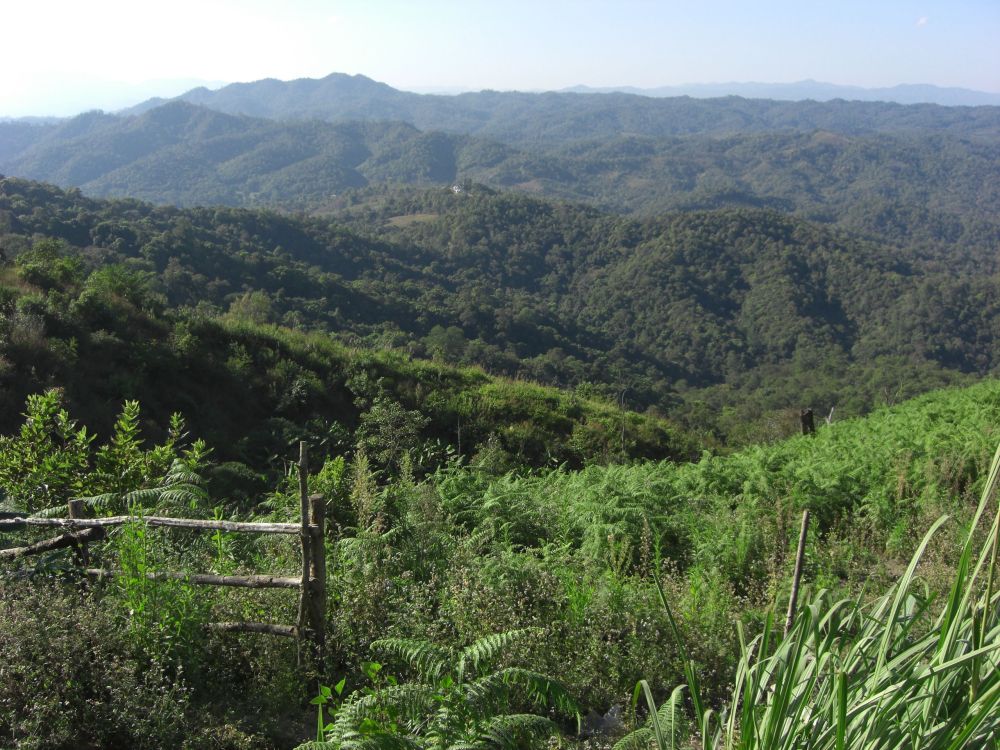 Four and a half hours after leaving Chiang Mai, we arrive at our destination for the night, Le Musikee Eco Lodge.  The place is quite pretty, 1000 meters high in pine forests, intersected by 2 rivers.  We are the only guests there.  We’re told there’s only an hour of electricity left on the generators, so here’s a candle for the room, and bring a flashlight to dinner.  The dinner is good; the brochure says everything is organically grown within the resort.  We retire to our cottage, the wood slats of the floor at times revealing the ground below.  The place smells wonderful, like the pine forest that surrounds us.  There are stars everywhere.  The only bummer was looking at an unused firepit that the cottages circled.  It’s cold – we find out the next day it got down to 7 degrees C, about 45 F.  But it feels refreshing.  It’s like glorified camping, and I like it a lot. 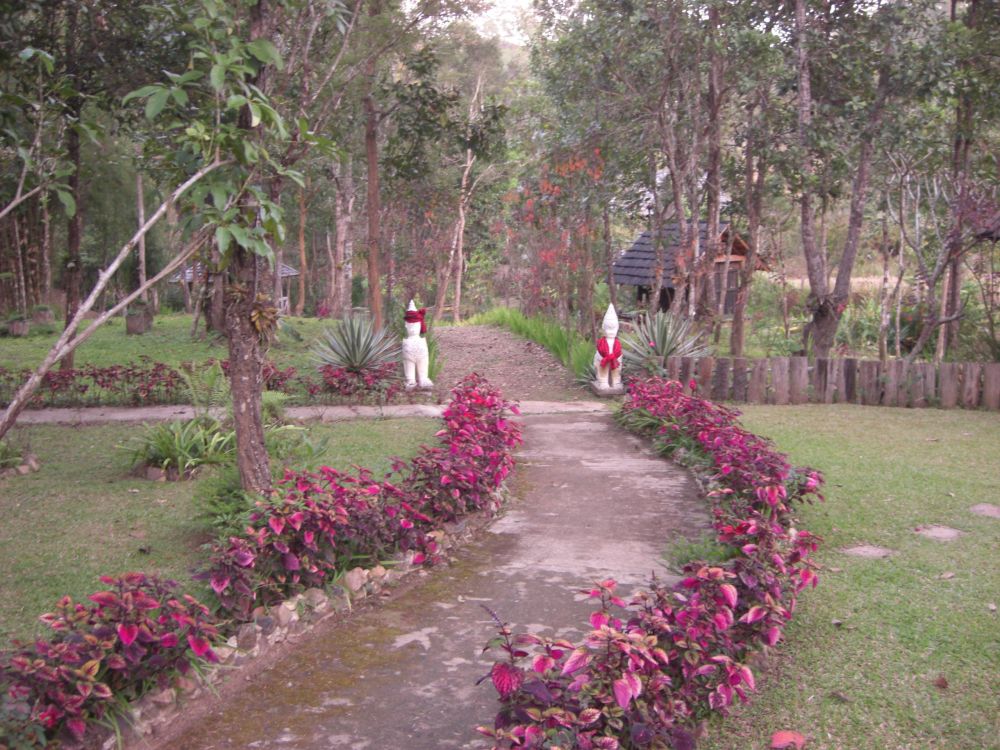 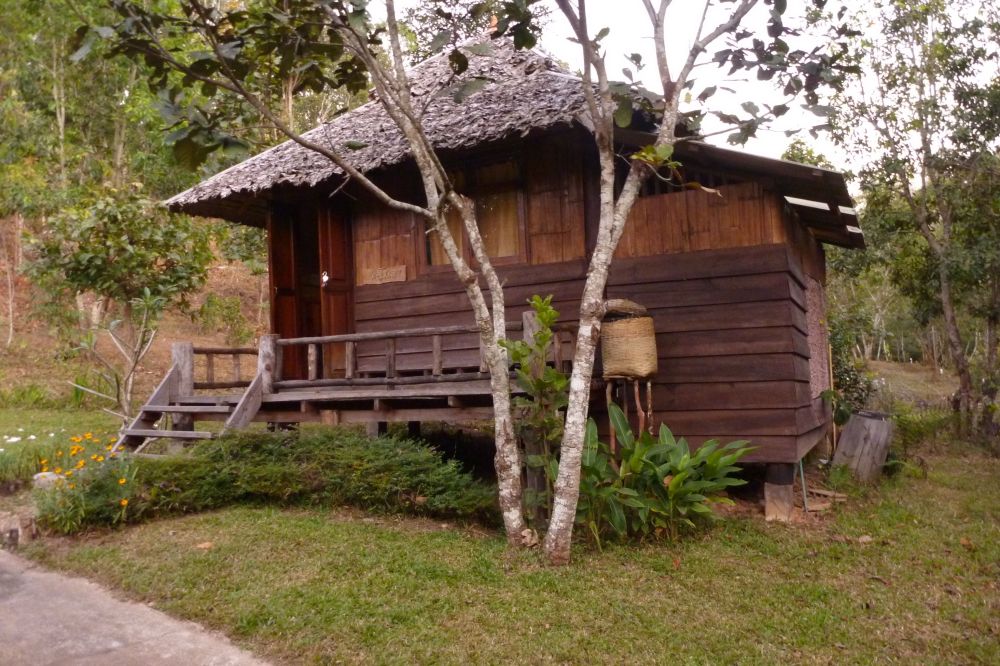 The next morning we set out for an hour and a half of trekking.  Our driver takes the vehicle ahead of us, and our guide Soiphet, who has only done this trek once before, gets another local guide to help us stay on track.  (He does correct a couple of wrong turns.)  We’re surprised at how many people are involved in this little tour for the 2 of us.  We pass through rice paddy fields (dry this time of year) and see evidence of elephants passing through the forest — mainly downed trees and dung.  Our guides point out plants & things along the way. 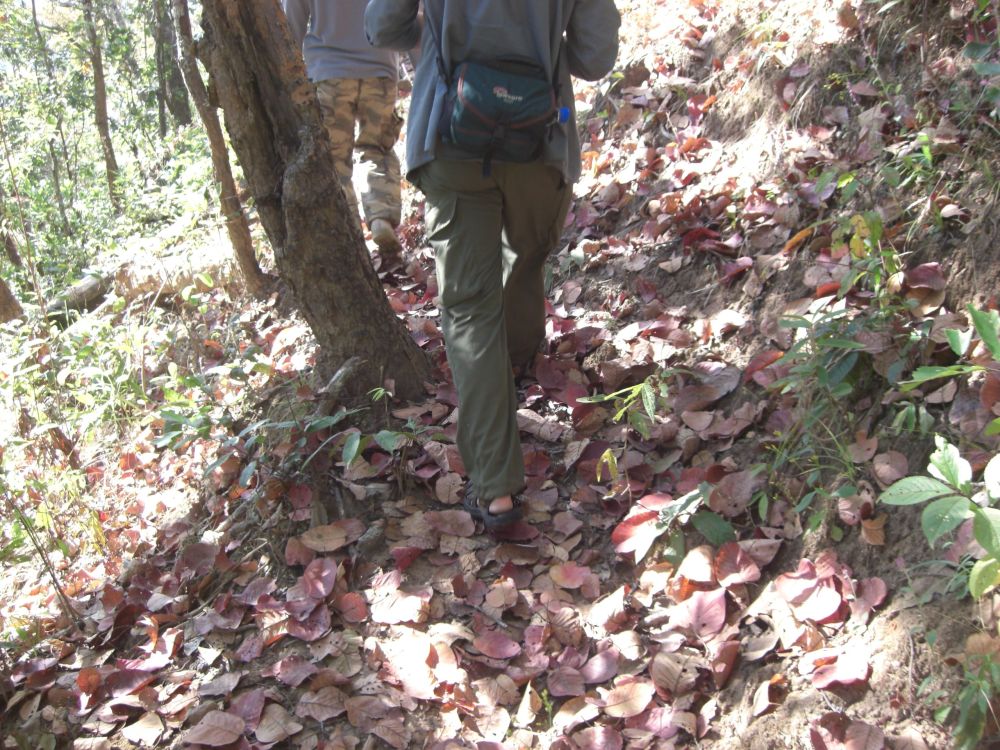 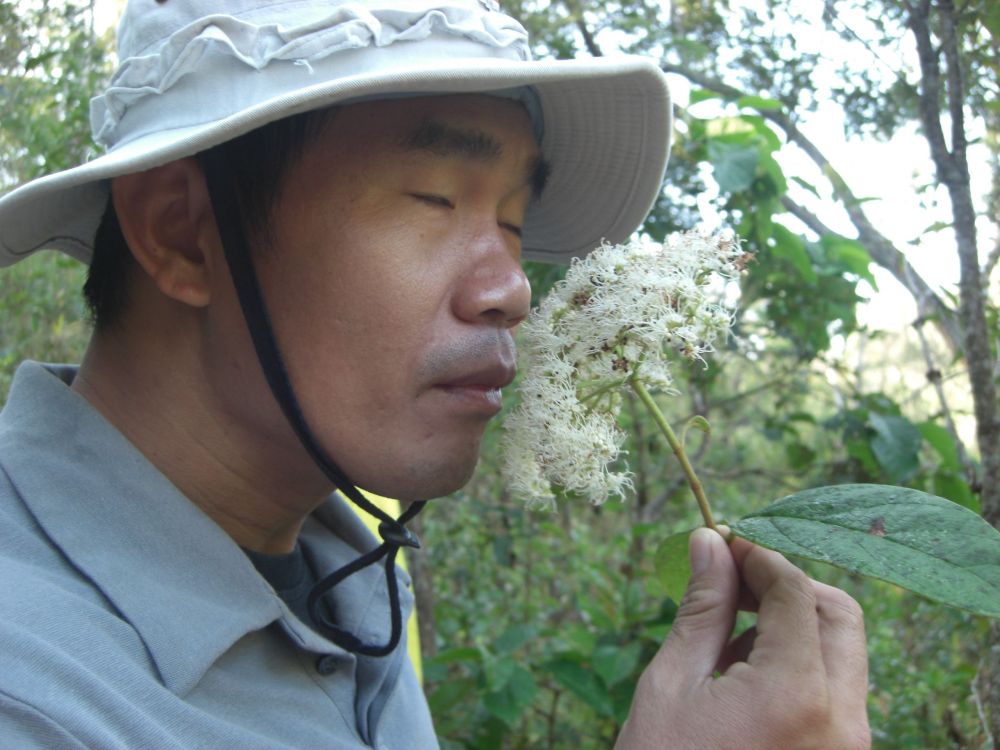 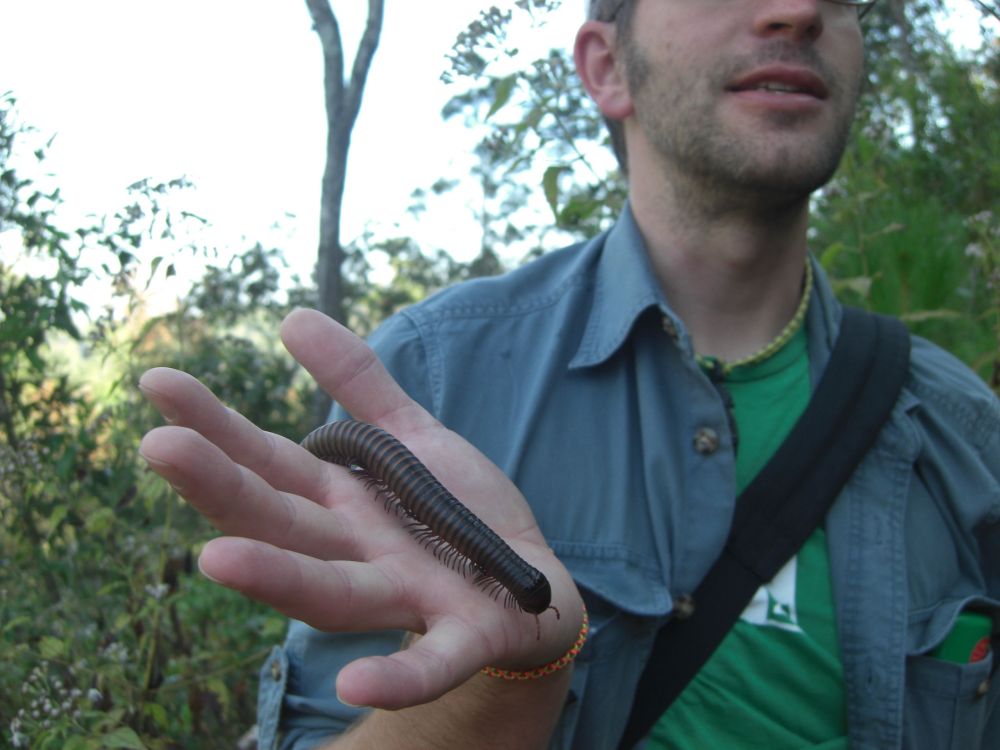 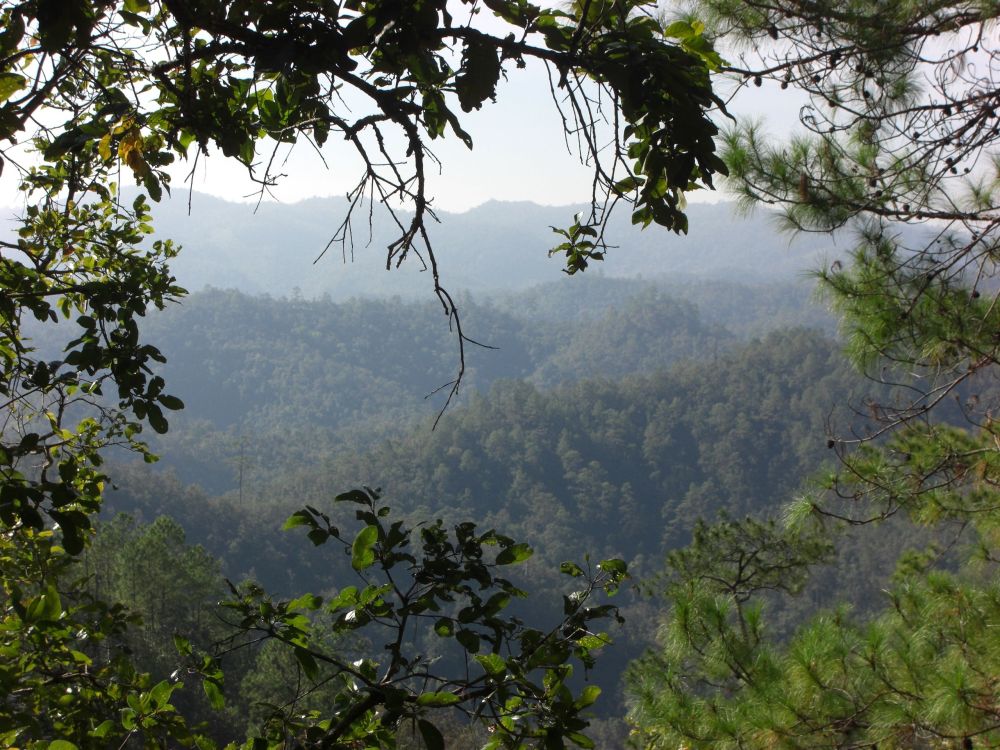 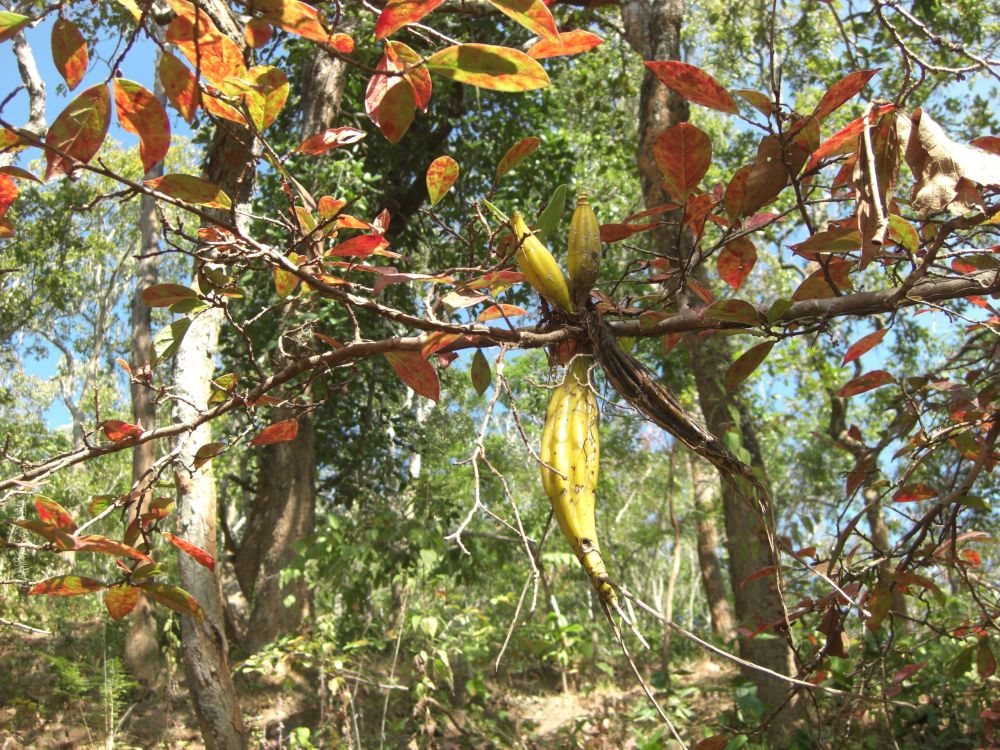 We turn around and see that the local guide, who is bringing up the rear, is carrying a large plant and a piece of wood.  We ask Soiphet why he is carrying these, then find out they will be decoration for his home.

We stop for lunch at a pretty spot in the river.  Our driver is already there, and has hot tea for us to drink out of a piece of bamboo that he says he carved himself and can only be used once.  There’s a group of people with him, preparing lunch.  We feel a bit fussed over.  They turn out a feast, very tasty and so beautiful. 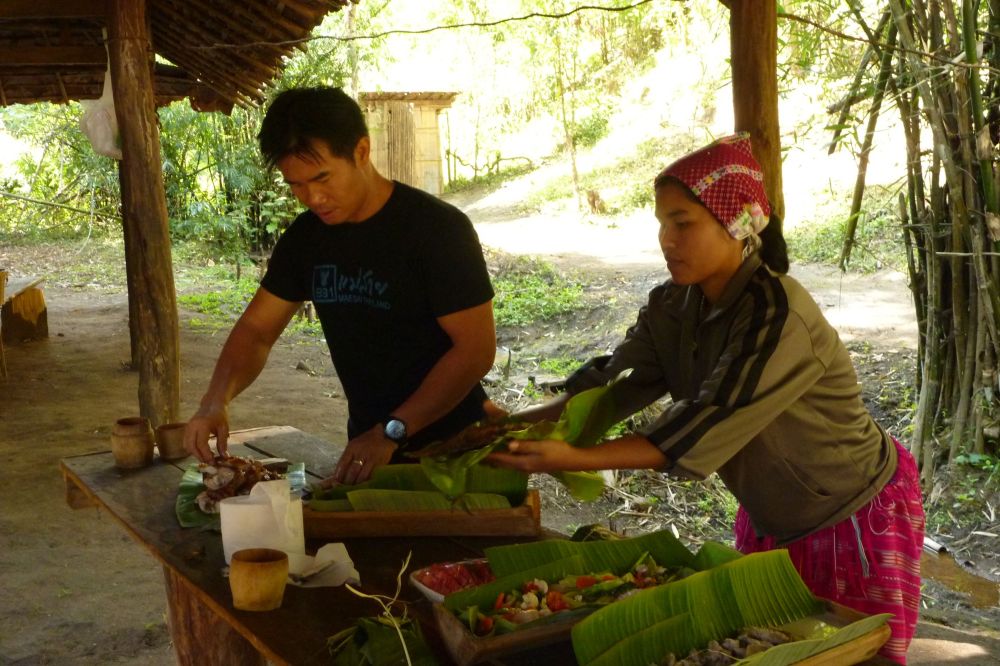 After lunch we head through the forest again with our 2 guides.  Soon we come upon a little ranch.  There’s an elephant waiting for us! 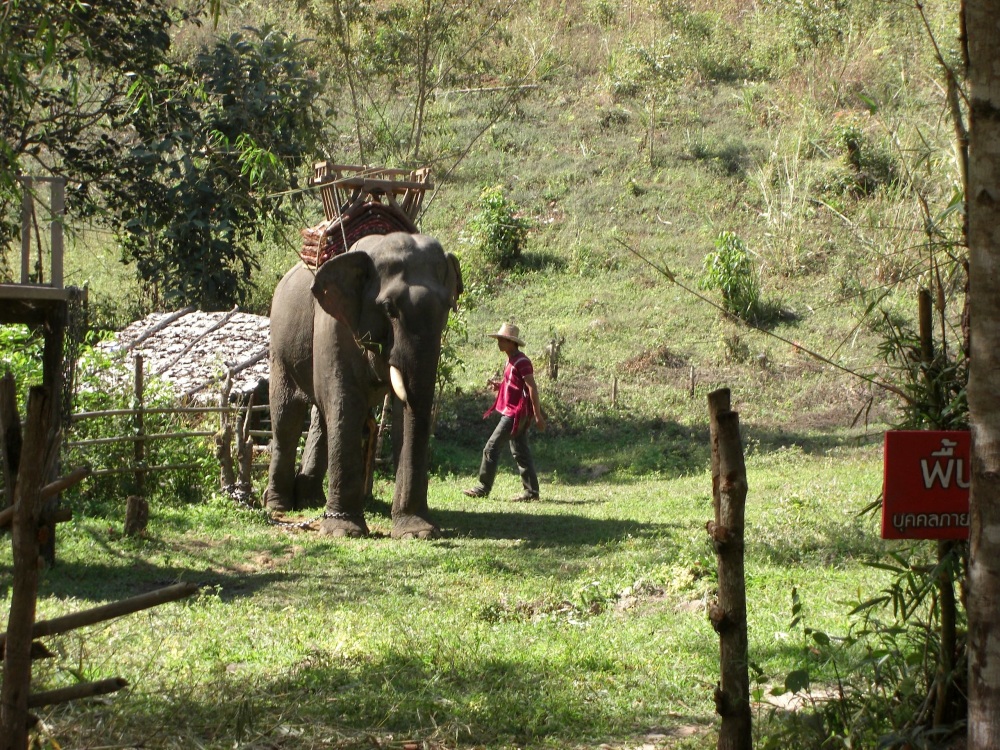 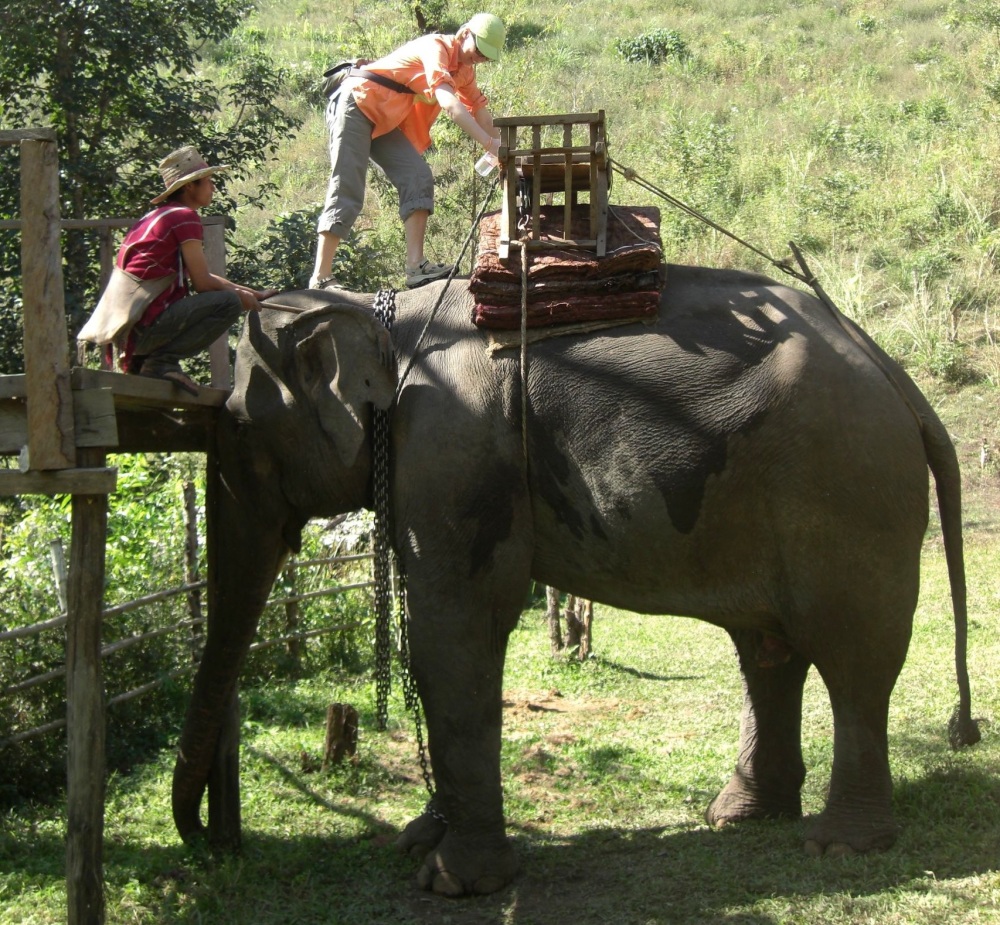 We spend the next hour and a half letting the elephant and 2 mahouts take us through the forest.  This felt like a much more natural exercise than the poor dancing elephants at Ayutthaya.  This guy chomped on trees the entire time!  The mahout would grow impatient after a few minutes, getting the elephant to move again after bouncing on his neck a few times and kicking his ears, humming, “Mmmm, mmmm.”  Sometimes the elephant would drag an entire tree with him while he walked.  At one point we spotted another elephant off in the distance.  The mahout pointed at her and said, “Girl.” 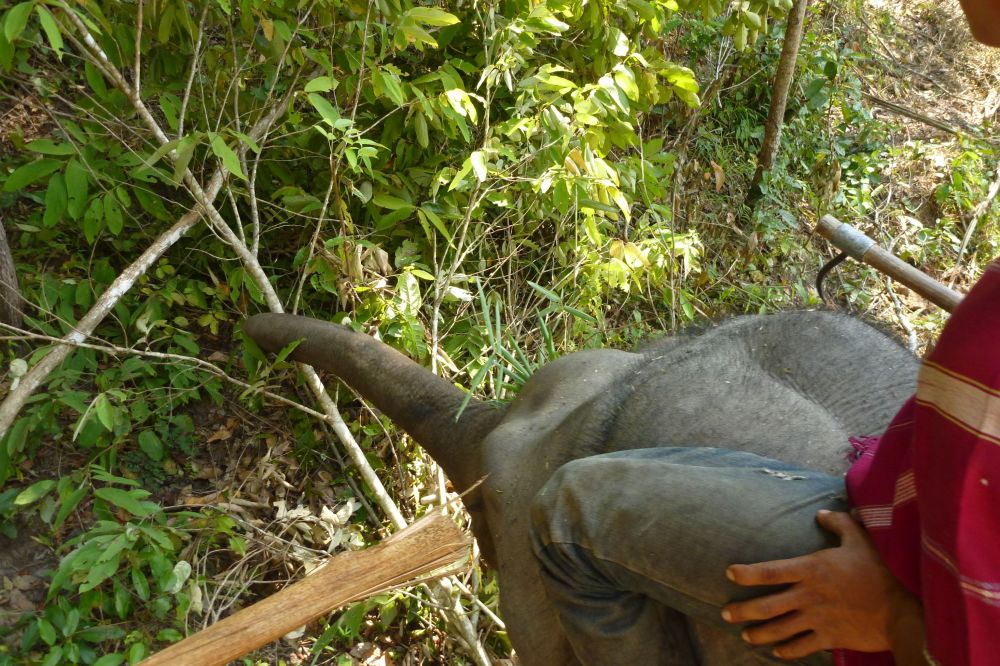 The elephant drops us off at our next destination, Karen Hill Tribe Lodge.  This one is even more basic than the last, but it’s clean, lovely, and serene.  There are plenty of other guests, which makes us feel less intrusive somehow.  The staff is so kind.  These were the same people who had made us lunch by the river.  Now they had hand-woven shirts for us. 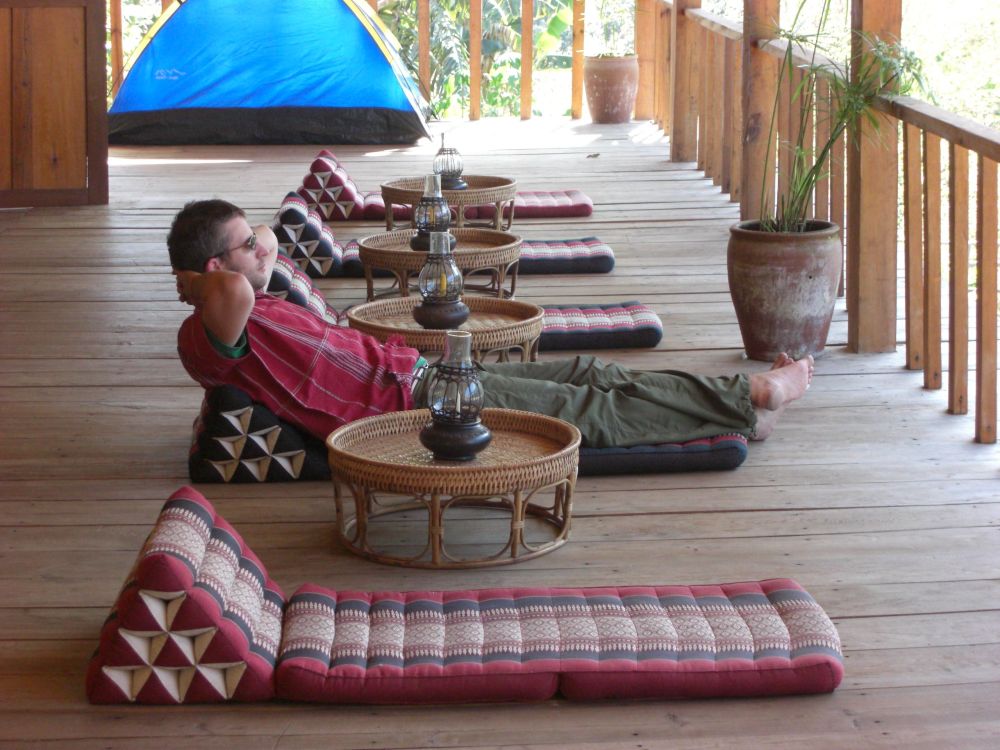 Soiphet takes us on a tour of a nearby village.  It’s a chance to get a little more exercise before yet another meal, plus I love that we’re getting to see how people live.  That’s why I put this trek in our itinerary.  Seb’s weirded out by it, says he feels like a voyeur. 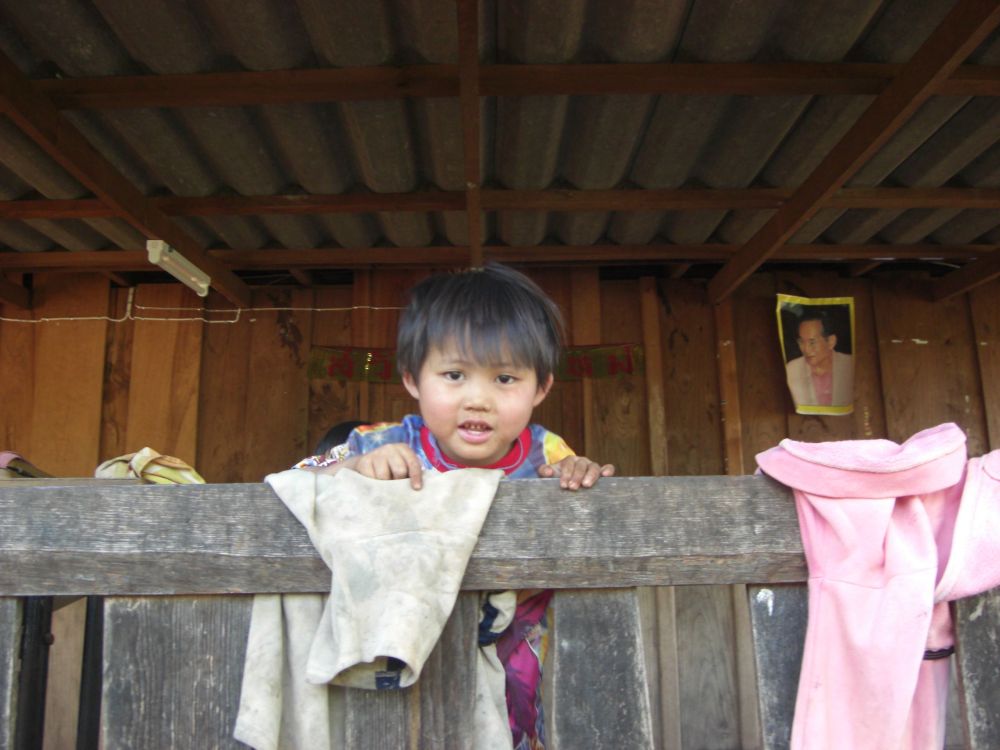 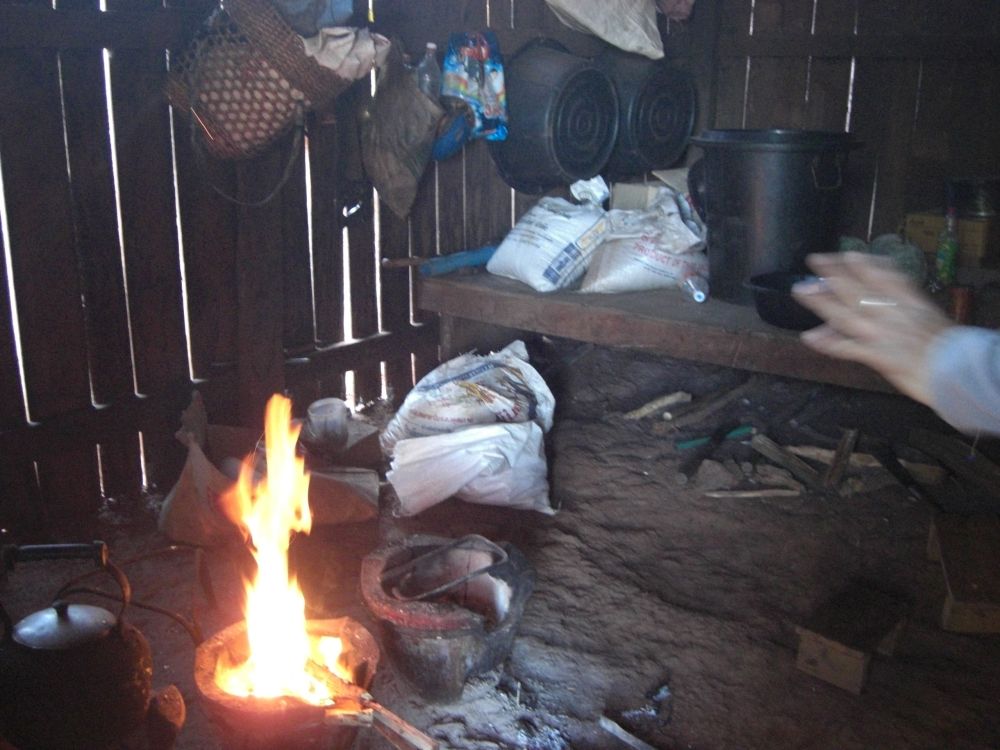 We return to the Lodge, and Seb decides to rest while Soiphet takes me on a tour of this village.  I can’t get enough.  I’d go inside people’s homes and hang out for awhile if they’d let me.

Here, a woman shows me how to gather up chicks to protect them from mongoose attacks at night.  Catching a chick is not easy.  She grabs them, firm and fast, and pops them inside this little basket.  Poof.

Back at the Lodge, the driver grills his favorite spiced chicken over the fire, and pours us glasses of a strong homemade rice wine.  Meanwhile, Soiphet teaches me how to make papaya salad.  They hold the papaya in one hand and whack it with a large knife, down and across, to make little julienned strips.  He makes it look easy, but I would much prefer a cutting board. 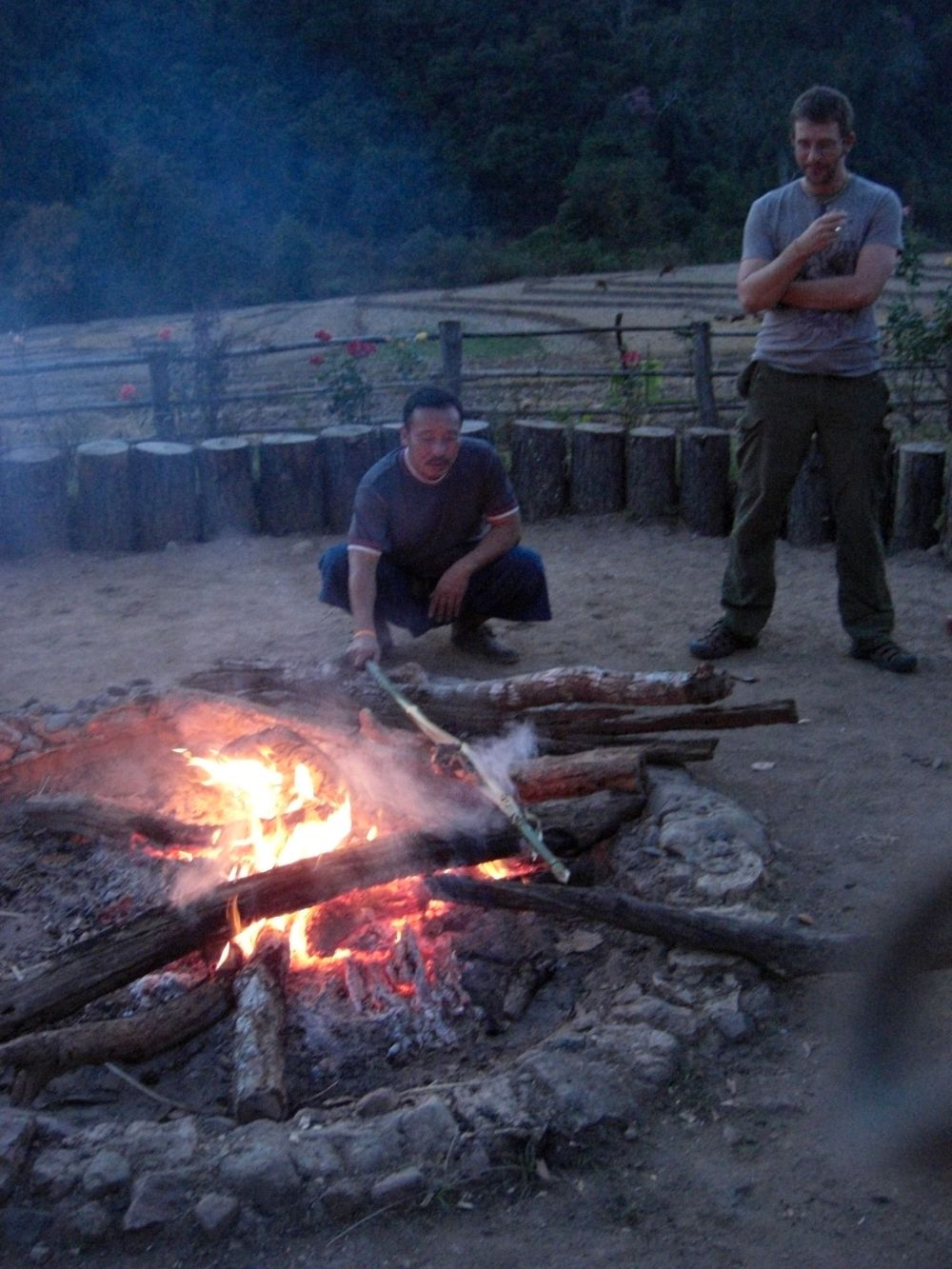 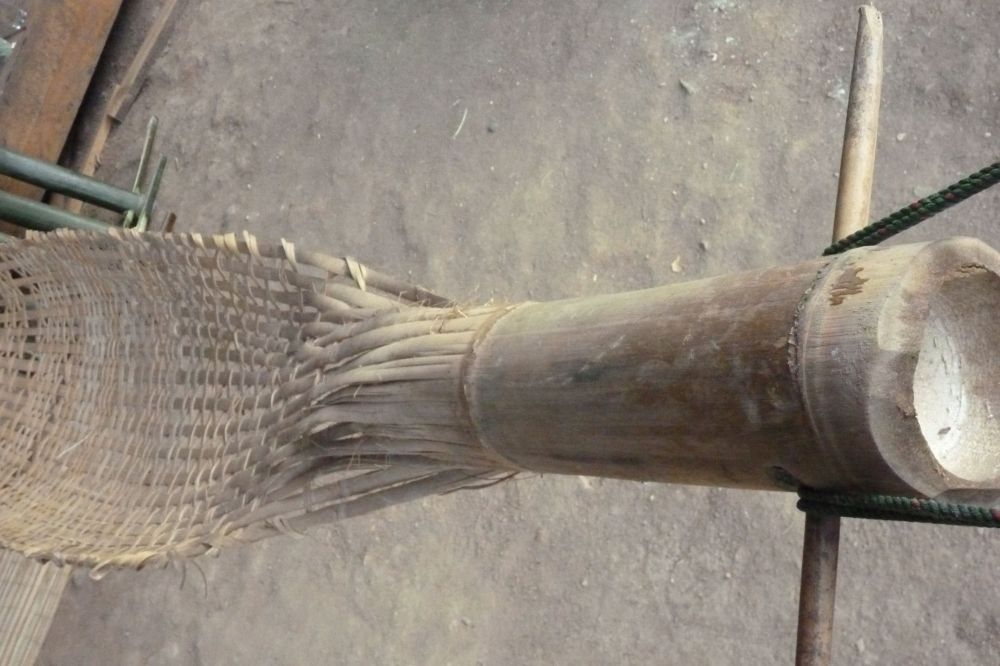 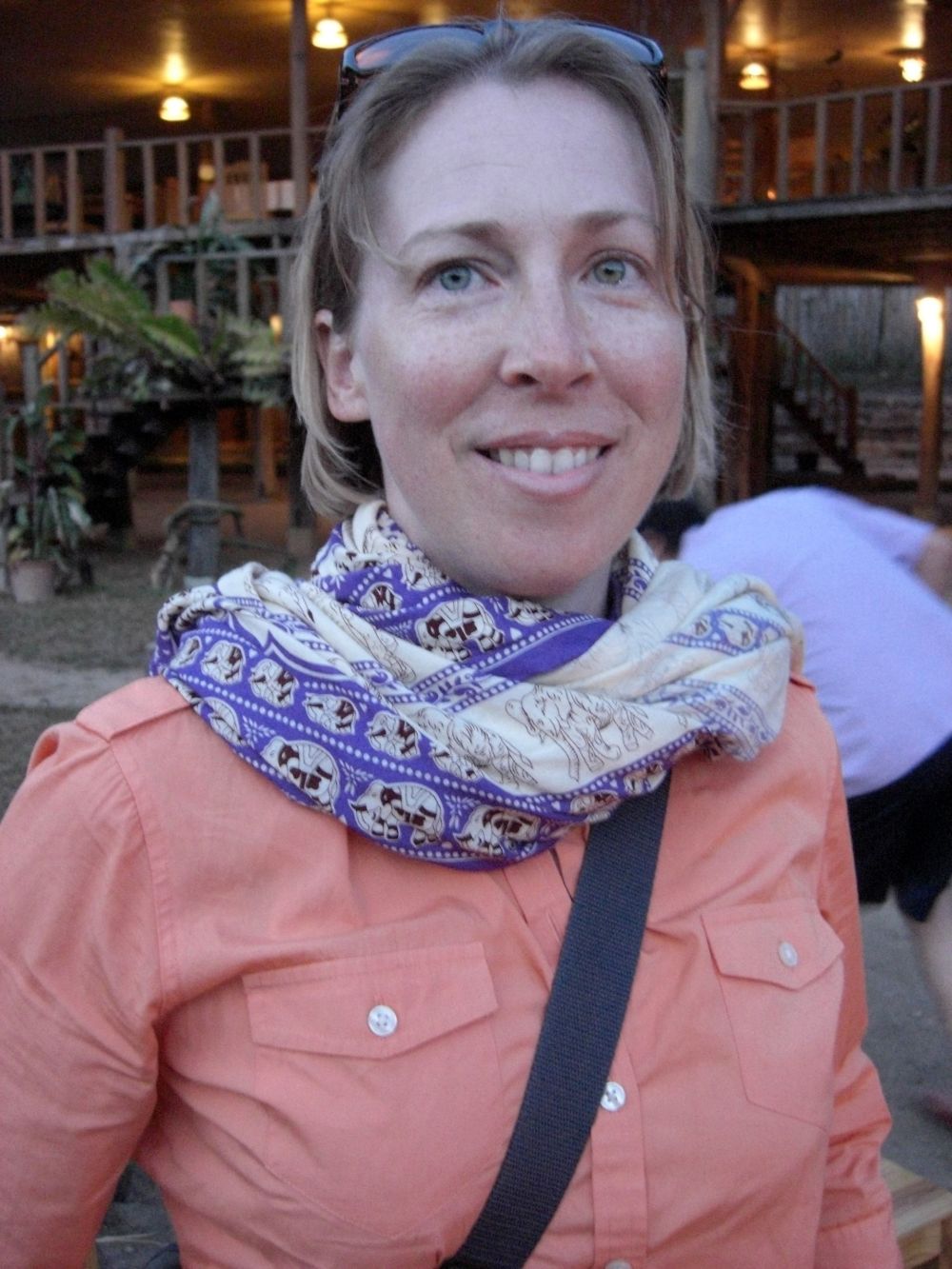 After dinner, children dance and sing for us.  We dance with them.  We give them a gift, a big box of cookies that Soiphet encouraged us to buy the previous day. 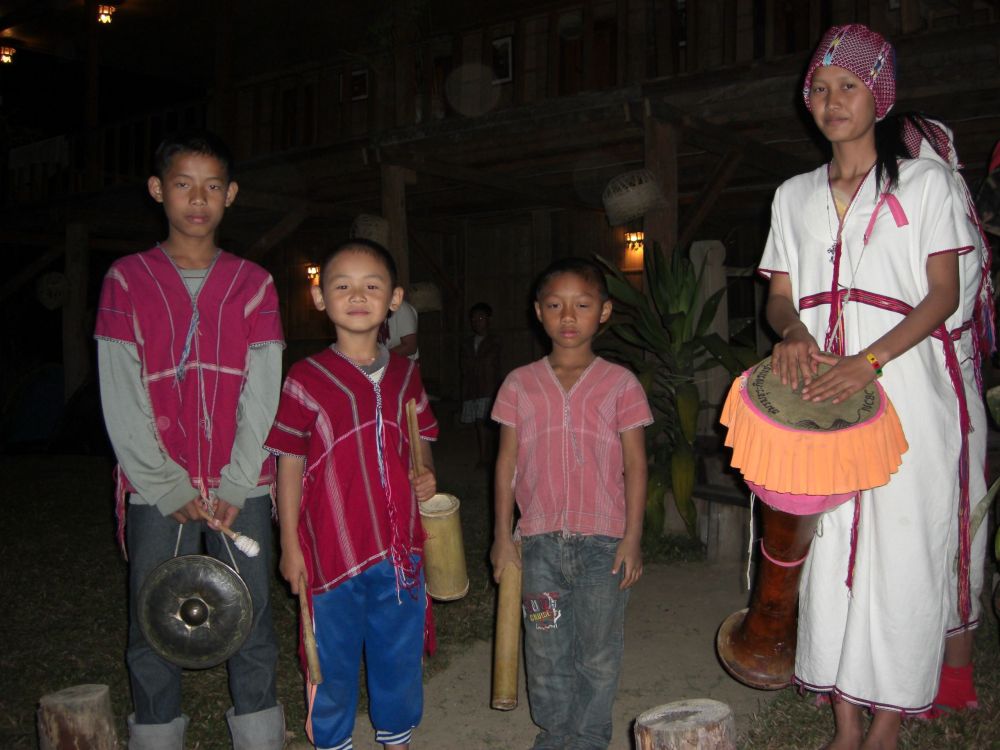 There are paper lanterns for everyone to launch.  We watch them head up, up, up until they disappear.

Everyone hangs out by the fire, eating, drinking, and laughing.  What a perfect day.  I’m sitting by the fire, two puppies curled up with me, drinking wine and getting a back massage.  This might be heaven. 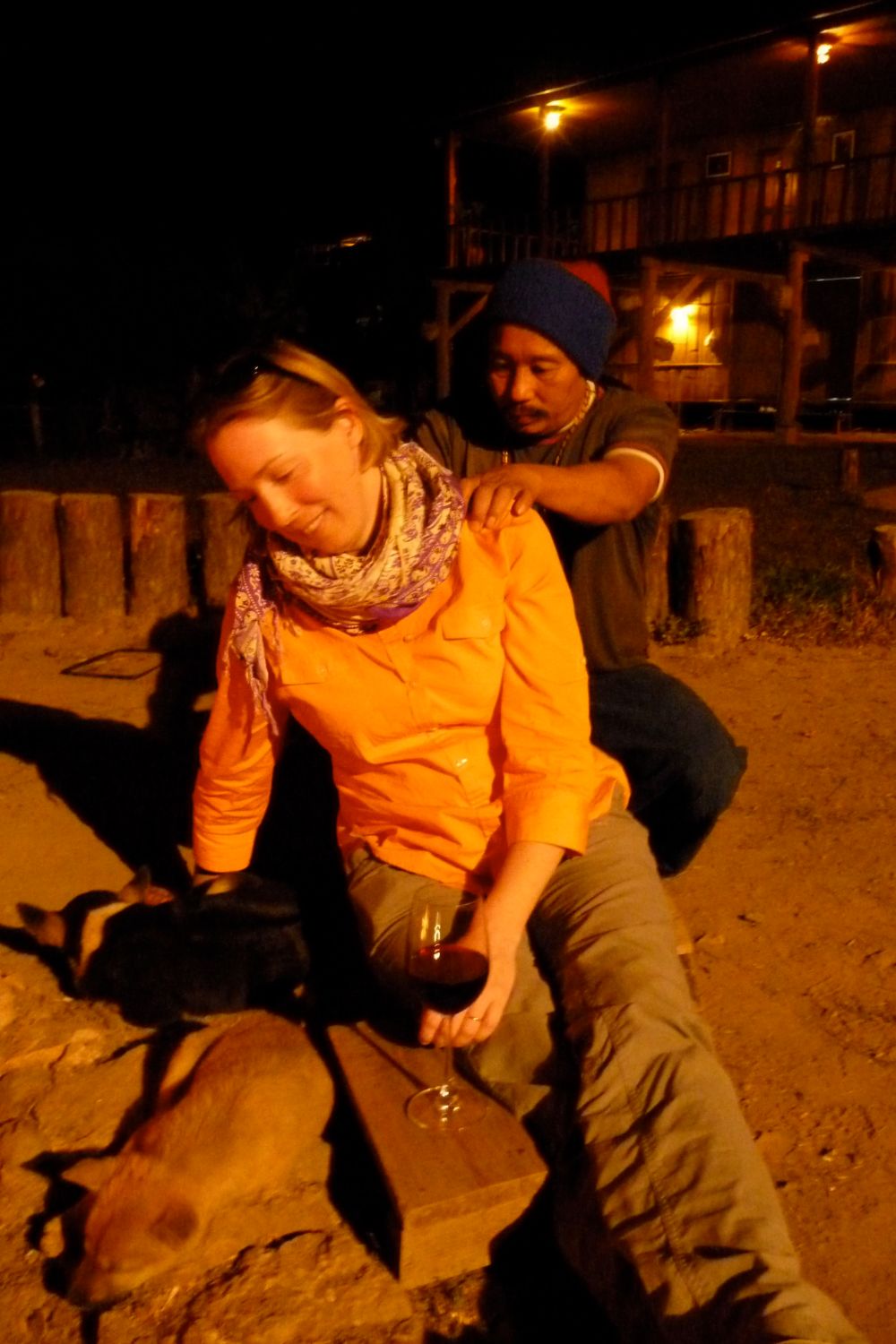 Eventually we retire to our room.  It’s just a mattress on the floor, no electricity, but with enough blankets to keep us warm.  I fall asleep smiling, the smell of pine and bonfire everywhere.  In the morning they ask about our breakfast, assuming we’d like it Western-style, but we’d rather have what they’re having.  The owner eats with us, a nice man from Scotland who married a Thai woman and started this business to help the local people keep their traditions alive.  He says most of the kids had stopped wearing traditional clothes and learning the music of the region, but he helped turn that around.  We’re glad to be part of it.  He also tells us that he’s been seeing a group of gibbons coming through the trees on a regular basis, which haven’t been seen in this region for a very long time.  He’s hung food like bananas from the trees to encourage them to keep coming.  This morning he has his telescope ready to show us, and we can hear their calls within the forest nearby, but cannot locate them visually.

We say goodbye and head out with our 2 guides again for another hike while the driver takes our luggage ahead.  We’re walking through the forest, and at one point we look up and see an elephant half-hidden in the trees, just watching us pass by.  Surreal!  It’s the same female elephant from yesterday.  Soiphet says there are only the 2 in this area, owned by the Karen hill tribes for logging, transportation, and tourist purposes. 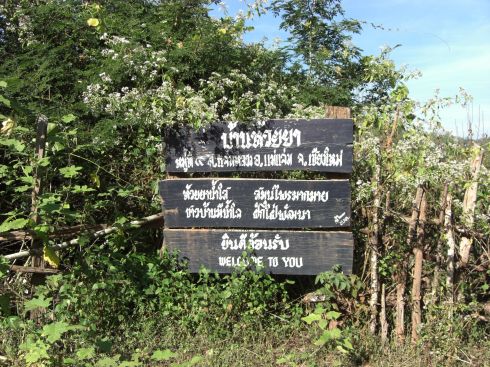 We enter a village (I like to call it You), where Soiphet introduces us to the village shaman.  We are escorted into his house, no shoes allowed of course, and sit on the floor across from him.  He offers us some water, and also some rice wine.  We sip politely, and he motions to drink more.  Soiphet nods to us.  We say a little prayer and shoot them down, hoping we’re done, but the shaman refills them.  Then he begins a ceremony.  It’s unclear whether this ceremony is a welcome blessing, or a cleansing to protect his village from evil spirits we might be carrying in.  It involves a piece of metal hanging from a string that he winds up tightly and pushes back and forth.  He uses more strings, placing them in our hands, on our shoulders, mumbling things the whole time.  He uncovers a hard-boiled egg, which I hope is just a prop.  He blows on it and mumbles something.  The egg goes into the dried rice and is ceremoniously moved around the bowl.  Candles are lit.  More strings, more mumbling.  Suddenly the metal piece falls from the string that has been wobbling and swaying overhead.  I must have jumped a foot.  He peels the hard-boiled egg, breaks it in half, and offers it to us to eat along with some cooked rice.  There are lots of witnesses — men of the village circled around our small circle, watching us.  We’re not feeling threatened or anything, maybe just a little uneasy.  Out of respect for the local traditions, we do whatever we’re told.

After our shaman encounter, it’s time to head back to Chiang Mai.  It takes about 7 hours to get there — not so fun with slightly queasy stomachs (from the water, wine, egg, curvy fast driving, or maybe all of the above), but we take frequent stops.  We get to see a geyser (notice the basket of eggs being cooked in the water), swim in a natural hot spring, and hike to see a waterfall.  As usual, I’m wishing we had unlimited time to take everything in.  What a great adventure this has been. 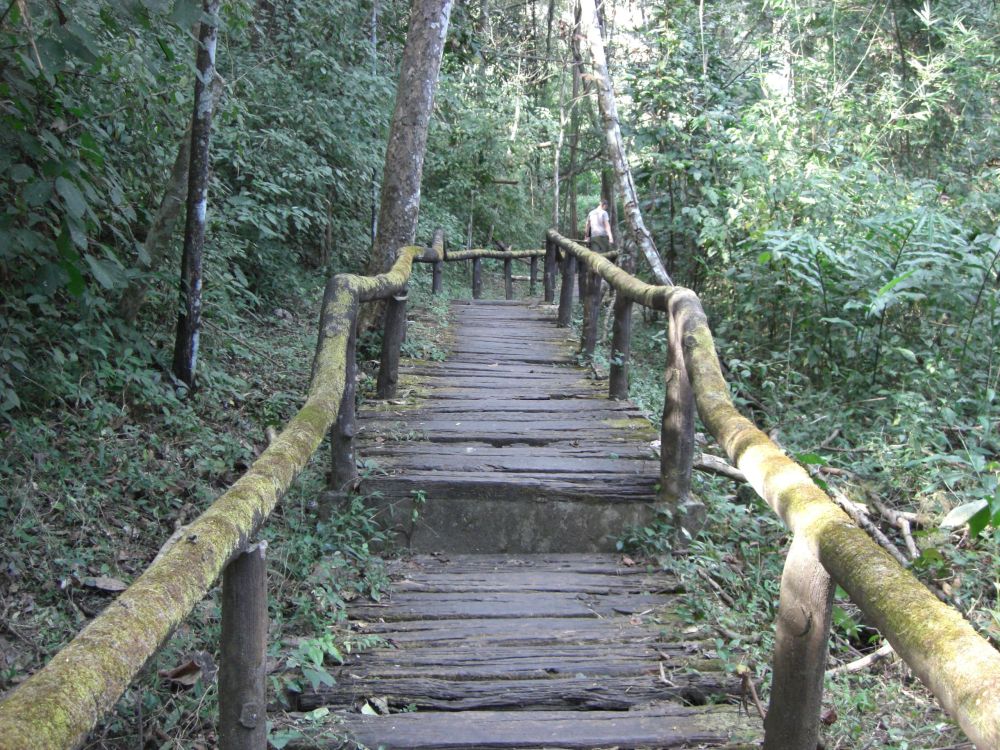 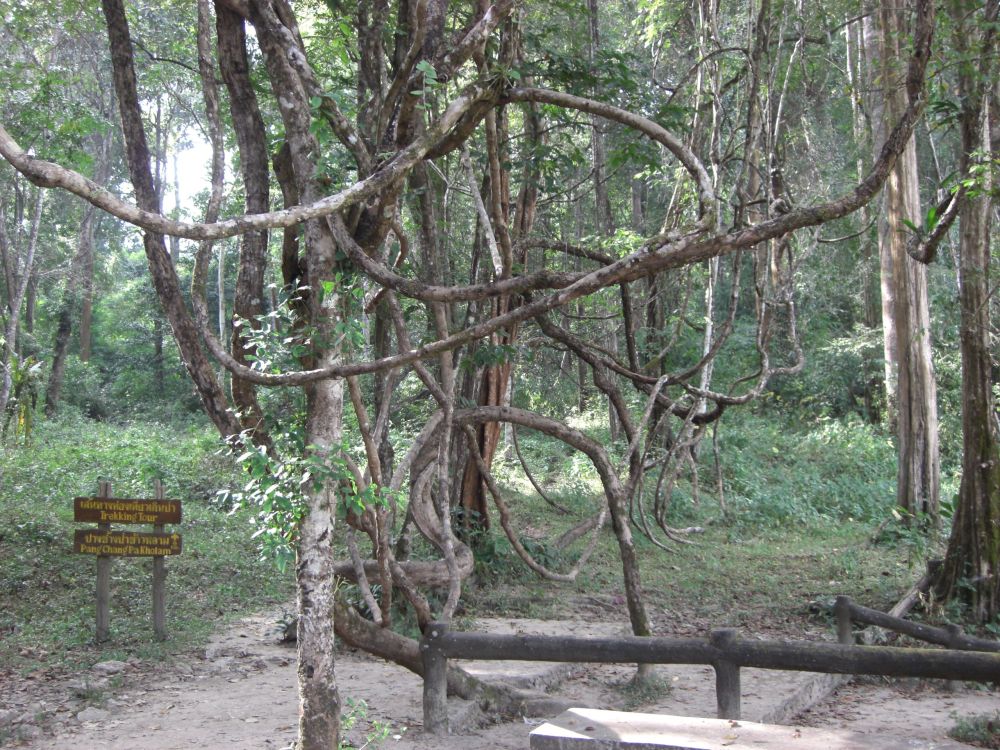