For my stepmom on her birthday today. She also could’ve taught me a thing or two when I was sixteen and still living at home, if only I’d been willing to listen. Thank goodness teenagers eventually grow up. Happy birthday Carolyn!

“Do you bend at the waist or the hips?” a fellow expat wife named Nancy asked me one day. We were in Uganda on vacation together, getting ready to go white-water rafting on the Nile. Her question about proper posture came while we were bending over to change our footwear for the ride and grease our legs with sunscreen.

“What’s the difference?” I asked, laughing, thinking it was a trick question.

Nancy demonstrated a “normal” forward bend. Normal by western standards, anyway. She bent forward at the waist, rounding her back. You can’t really call it a bend; it’s more like a slouch. Yep, that’s normally how I bend over to pick something up, to tie my shoes, to weed the garden, whatever. And yep, if I do it for any length of time it’s almost always followed by a backache.

Then she demonstrated bending at the hips. I tried it with her and had some trouble getting the hang of it. It’s a strange feeling. You must keep your back completely flat and stick your behind out, then slowly bend forward as far as your hamstrings will allow, keeping your legs straight and butt high. It’s almost obscene, really.

Which explains why it’s a very noticeable posture. It’s one I’ve noticed many times before but never realized exactly what I was looking at, or what made it so foreign. For example, when Viviane cleans the floors, I used to find myself unable to look away, amazed at the way she folds completely in half like a pair of scissors. (She always washes the floor by hand, using just a towel and a bucket of water. I’ve tried giving her a mop before, at which she just laughs.) Sometimes a friend stops by while Viviane’s in the middle of it. “Look at how she does that!” I’ll whisper, and we’ll watch her until we realize we’re staring. 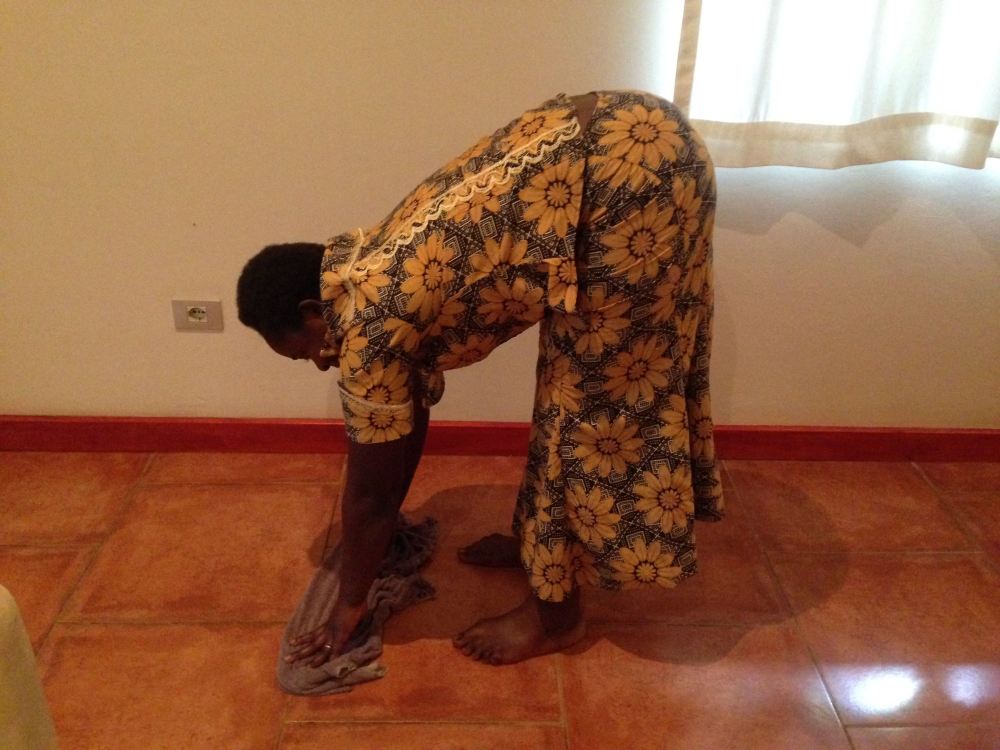 Viviane posing for this story. Notice her flat back and straight legs. If somebody tells you to “bend over and touch your toes,” you’d probably automatically do it with a rounded back. Try flattening it out instead! Google “hip hinging” for images that are much more exaggerated than this one.

I was also reminded of all those times riding down the road catching glimpses of Congolese women cleaning the dirt around their huts, bent all the way over, brushing the bare earth with short, handmade brooms. It’s eye-catching for two reasons: firstly for the remarkable way they bend, scissor-like as Viviane does; and secondly for the effect their brooming has on the looks of the place. I mean, it’s a mud hut, with a grass roof and dirt floors, surrounded by dirt. But every day they neatly brush away the loose dirt, exposing a solid clay layer underneath, and a yard that actually looks quite tidy.

You would think these African ladies would suffer after a lifetime of bending over so much, but having a bad back is rather unheard of around here. I don’t know how accurate these statistics are, but I’ve heard numbers like 5% reported back pain in traditional cultures such as Congo, versus 80-90% in our industrialized one. It seems to ring true; nearly everyone I know (myself included) has recurring complaints of a sore back or neck. 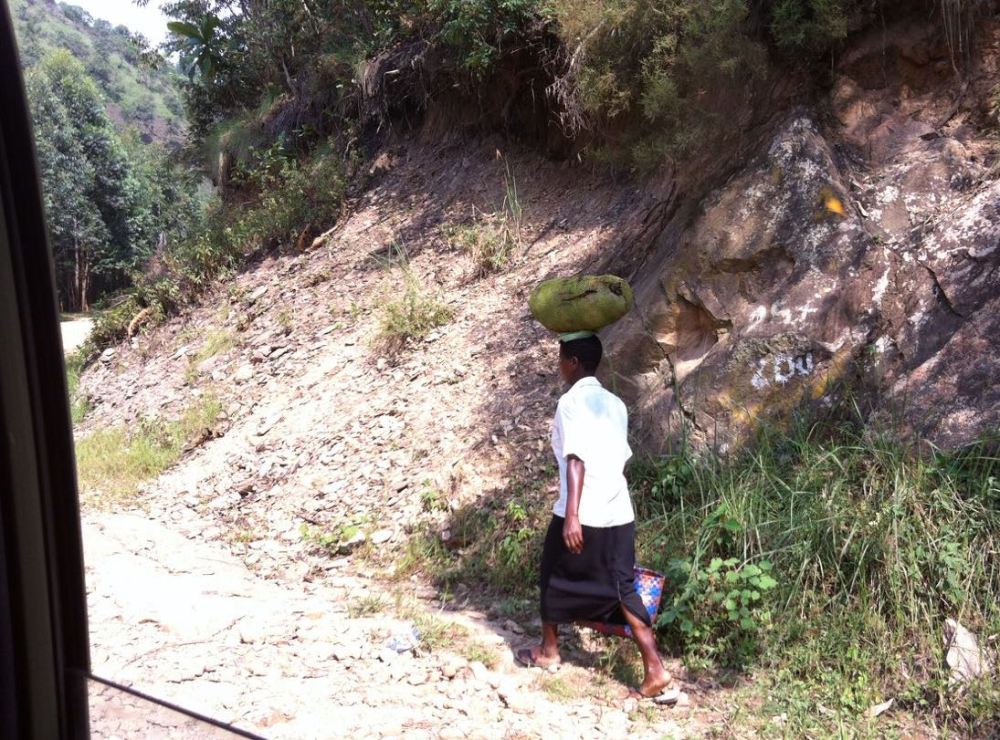 Jackfruits can weigh up to 80 pounds, and this looks like a big one. I can’t imagine that kind of pressure on my neck. This woman (photographed in Uganda) is all muscle!

My friend Nancy had recently had back surgery, and as a result has learned a thing or two about physical therapy and proper posture. She even attended a seminar by a posture expert (Esther Gokhale) who often uses photos of African and Asian laborers as examples of good posture. It’s not just bending over that’s different, it’s also standing and sitting up straight: shoulders back, boobs forward. For some reason us girls in the West learn at a young age that good posture is perceived as snobby, show-offy, old-fashioned. We learn to slouch, to hide. And we pay for it the rest of our lives with bad backs and frozen shoulders.

While Viviane took her annual leave recently, I was stuck cleaning my own house. (The horror!) I’ve never been particularly good, or shall we say disciplined, at cleaning chores. Especially mopping. But this time around I too eschewed the lonely mop standing in the corner, all dried out from years of neglect, and tried it Viviane’s way. Just a bucket of soapy water and a medium-sized towel. After one pass, which took 60 seconds max, I uprighted myself and realized I was out of breath. What kind of shape am I in?? But I kept going, which wasn’t easy. The next day I was sore everywhere, including my back. Obviously I wasn’t doing it right.

On my second attempt, just this weekend after returning home from a month of vacation to a dusty and cat-hair filled house, I made more of an effort to bend correctly. This meant placing my hands in my hip sockets and bending forward with a straight back, very slowly, stretching my hamstrings until my butt was straight up in the air and my hands were effectively pinched. Only then was I sure I was bending at the hips, not the waist. Head about knee high, legs straight. Then I grabbed the towel, squeezed out the water, and began swiping the floor, back and forth.

On the first couple of swipes, a dozen little pops could be heard coming from my shoulder and back bones. (Obviously I did zero yoga while on vacation.) But good pops, the kind I wish I could pay a chiropractor to do for me here. I was still out of breath after each pass, but kept going. As my hamstrings loosened up, it got a little easier. At some point I entered a zen-like state and couldn’t stop, doing much more than I intended to, probably twice as much as last time.

But there was still one problem: it was hard to get enough leverage bent over like that, so I ended up heavily favoring my stronger right side, and bending my knees more than I should. Yet Viviane is able to do it in such a way that her knees never bend, and the towel never leaves the floor. In fact she sweeps AND mops at the same time; I’ve never understood how she’s able to get all the debris up without a broom, but she does. When I started consciously trying to mimic her swiping movements, forcing my left side to take the lead its share of the time, pulling towards the center instead of pushing, the leverage came naturally. Then I realized that this actually felt good. It felt balanced and strong… a lot like yoga, actually.

The next morning I woke up, I’m happy to report, without an ounce of back pain. Sore hamstrings, definitely. And slightly sore triceps, too. But sore in a good way, like a post-workout kind of sore. In fact I enjoy being reminded that my triceps actually still exist every now and then!

I made a comment in my early stories about how Viviane is good but “just needs a little training” as I taught her how to squeeze the toilet cleaner bottle up under the ledge, and drape a blouse over the tapered end of the ironing board. (The latter never stuck, by the way.) It’s a nice lesson for me to remember that there’s a lot she can teach me, too. Not only is the hand-mopping method more effective — I can get all the nooks and crannies, baseboard, corners, etc. while down there — but also it’s way better for the whole body. In the future I can save money on a mop and a gym membership!

And the best news of this whole story? Viviane is back at work today. It’s good news not because I can stop practicing my newfound mopping skill; it’s good because it means Olivier is on the mend. (See Introducing Baby Jenie if you missed the story.) She told me this morning his ordeal was “une longue histoire” — a long story, which I hope to hear more about this week during our cooking and French lessons together, while baby Djeni and the cat play at our feet.

For more on good posture tips plus some cool photos of African ladies bent in half, visit: http://gokhalemethod.com/what-hurts/knee-pain

Another great photo at: http://harlotssauce.com/guest-writer/2011/10/19/african-queens/

Yet more gorgeous photos at: http://thepowerofposture.net/?page_id=60