In Europe you cannot throw a rock without hitting a cathedral. There’s probably a clever pun there somewhere, but all I really mean to say is that there’s a lot of them. In America we may have a larger variety of churches of different denominations, one on every corner sometimes, but Europe dominates in centuries-old, beautiful Catholic cathedrals. They seem to punctuate every skyline, whether you’re in a major metropolitan area or a tiny village in the country.

I’ve had the opportunity to see some really beautiful churches during my travels and adventures. Each time I step inside one to admire its architecture, its tranquility, or its shelter, I always think of my dad, and how much he would love seeing what I’m seeing. The feeling is strongest, of course, whenever I’m inside an old-world Catholic cathedral, my dad’s chosen faith. So to wish him a Happy Father’s Day, I’ve put together a collection of the most interesting ones I’ve got on digital record.

It turns out I’ve got quite a few, far too many for one post. Since I’m kind of going with a French theme at the moment, this will be the “French edition.” Future editions may be forthcoming… I’m thinking an African Edition would be fun, and there’s also temples, mosques, synagogues… so much variety. Next week we’ll be exploring Jewish culture during our stay in Kazimierz, Kraków. But in the meantime, I hope you like this one, Dad. Happy Father’s Day!!

First up, Reims, France. My friend Jen and I were only there for the champagne, yet we couldn’t help but notice the beautiful Notre-Dame de Reims cathedral in the center of town. Turns out it’s a rather important place. The Kings of France were once crowned there, Marc Chagall designed some of the stained-glass windows, and students of Gothic architecture still look to it today for examples of fancy things like flying buttresses. Also, the cathedral was turning a mere 800 years old that very year, celebrating with a modern sound and light show each evening.

façade of the Notre-Dame de Reims, at night (September 2011)

detail of the main gate

the back side of the cathedral, more beautiful than the front, imo 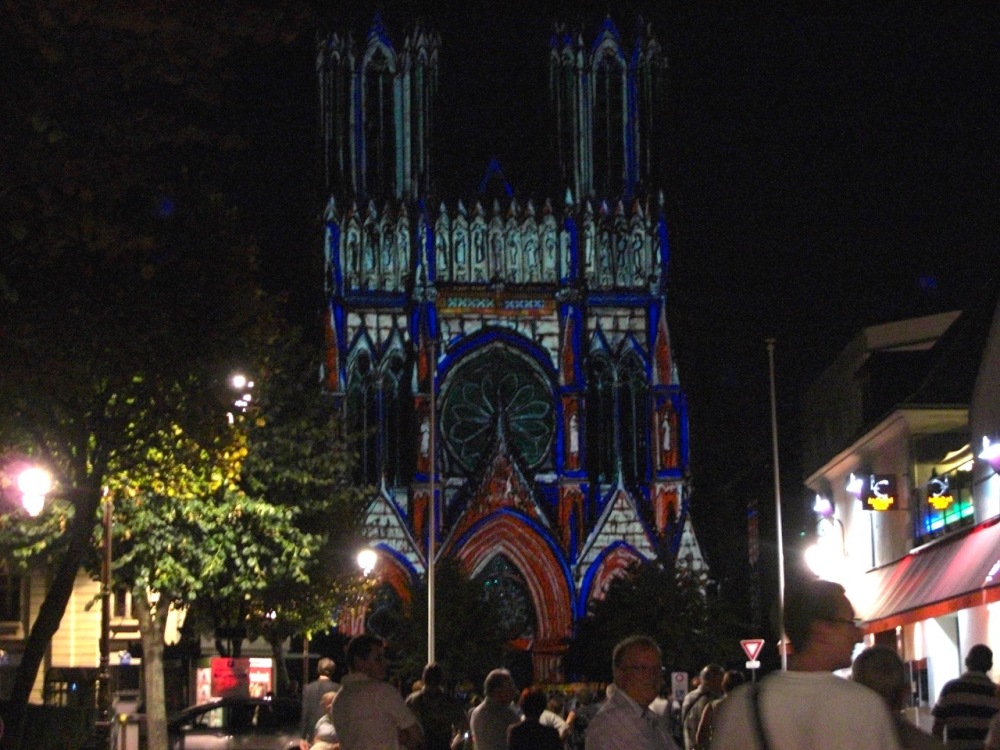 the light show we could still see from our hotel

the other thing Reims is known for… (hey, it was a monk who invented sparkling wine, so this counts as church in my book)

Next up, Dijon. Yes, the mustard capital of France. We only spent a couple of hours there for lunch, so I’m not 100% clear on what’s what, but from my internet research I think I was impressed by two different churches. First, the Notre-Dame de Dijon, known for its spirited gargoyles. One which represented a loan shark “coincidentally” fell and killed an unlucky groomsman standing below, who also happened to be a loan shark. (However, since this story dates from the year 1240, I doubt snopes.com can tell me whether it’s true.) The second lovely church is the Saint Bénigne Cathedral with its colorful Burgundy-style roof. Both were built in the 13th century.

Notre-Dame de Dijon with its 51 gargoyles in three rows

another view of Notre-Dame de Dijon (Our Lady of Mustard?)

Moving on to Beaune where we had come seeking Burgundy wines but took a moment to peek inside their cathedral as well.

a typical village skyline, while out vineyard-hopping on our bicycles

Followed by the granddaddy (or mommy, actually) of them all, the Notre-Dame de Paris. I put a couple exterior shots in my previous post so I could squeeze a few more in this one.

look at those flying buttresses

Another Paris beaute which I mentioned in the previous post was the Basilique du Sacré-Cœur. I was quite impressed with this one, maybe because it’s positioned at the highest point in Paris.

my only “selfie” of the post, proof that I was there and did not burst into flames

Back to 2011: Moving on to the south of the country and our barging trip with friends on the Canal du Midi. We were most impressed with the food in Castelnaudary and the architecture in Carcassonne.

with my stylish friend Anna, outside the Basilique

A small collection from the south of France:

a touch of the tropics in Monaco

old vs new in Saint-Raphaël 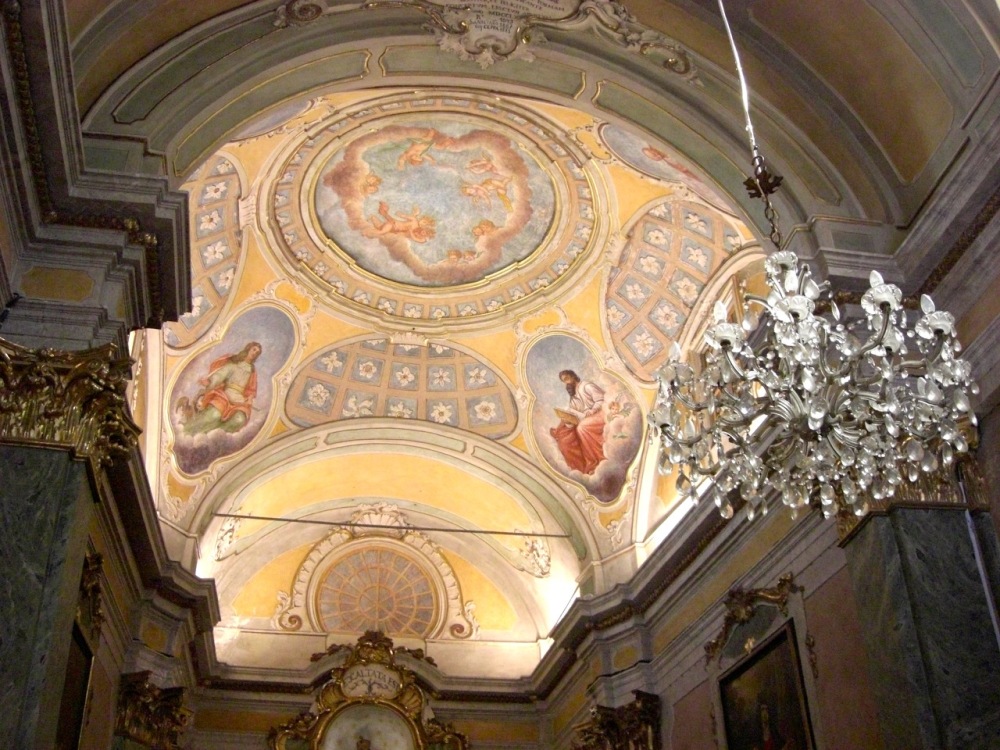 Last year when I returned to France for another intensive French course, I took the opposite tack: instead of living the high life on the Riviera, I holed up in a mountainous former monastery instead. I haven’t told that story yet, but here are some of my favorite shots from the gorgeous nearby town of Moustiers Sainte-Marie.

the village of Moustiers-Ste.-Marie, from a hike above

Of course the parish church stands out as the highest building in the center of town. But the real highlight is the 12th-century Notre-Dame de Beauvoir chapel just outside town, after following a mini-pilgrimage of 262 steps. 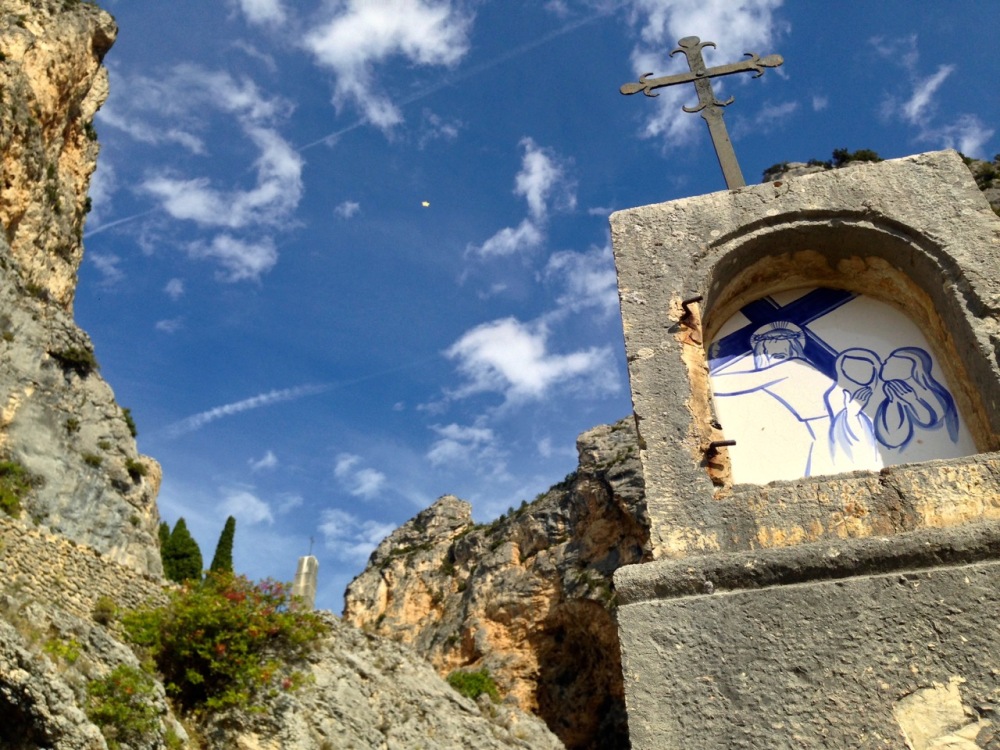 one of the stations of the cross, with the chapel and gold star in the background

In the photo above you can see the 4-foot gold-painted star, one of the symbols of Moustiers. It’s hung on a 225-meter-long chain anchored on the two cliffs that tower over the perched town, and has been since the 10th century (though replaced several times). Legend has it that during the Crusades, a knight from this village was held prisoner by the Saracens. He prayed that if he ever made it home again, he would hang a gold star over his village.

looking down from the chapel

After my course I had a day to spare, so I explored nearby Marseille and totally fell in love. Occupying the highest spot in town, and visible from nearly everywhere, is the Notre-Dame de la Garde. I heard it was a great walk but had other priorities for my short time there; however I enjoyed sneaking it into several of my photos. The featured photo at the top was taken from the excellent new museum, MuCEM, and this one from my hotel just above the vieux port: 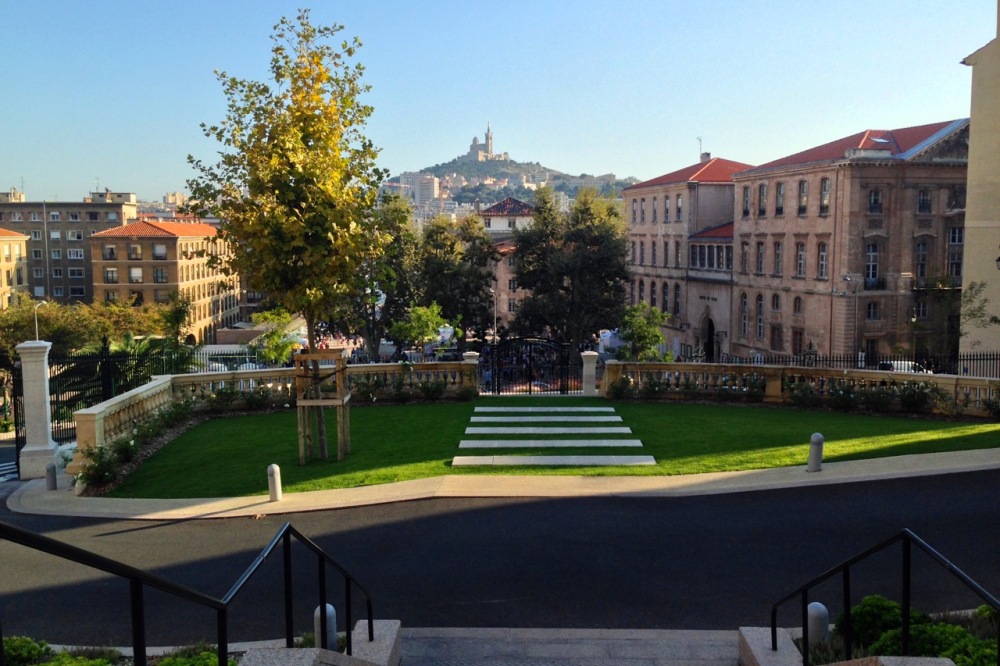 I also really liked the juxtaposition of the ultra-modern MuCEM with the Marseille Cathedral in the background:

old and new in Marseille

playing pétanque by night at the Marseille Cathedral

So those are the religious highlights of my last couple of trips to France. Good thing I haven’t gone more often or there would be hundreds more to choose from!

Wish you were here, Dad! (P.S. Book a ticket to Europe as soon as you can!)