I was poking around online the other day when an article called “The 20 Most Peaceful Countries to Visit” caught my eye. It was one of those slide show-style type of articles… the kind where you must click “Next” for each new piece of information, and is badly written to boot. I’m generally against click-heavy articles, but every now and then with an interesting topic and pretty pictures, they suck me in.

Their top 20 was filled with Scandinavian countries, of course, and the usual European suspects along with Canada (#7), New Zealand (#4) and Australia (#9). I didn’t realize already-on-our-wish-list Japan was so peaceful at #8, and one really big surprise was Bhutan at #18, a Himalayan mountain kingdom that officially measures their “Gross National Happiness.” I think our travel wish list just grew a little bigger.

I wanted to know more and decided to check out their source, something called the Global Peace Index. I’ve put a slightly annotated copy of it below. The most striking thing about it, on a personal note anyway, is how solidly our household hits the extremes. Canada, half of our collective coupled citizenship, is seventh from the top. The DRC, no surprise, is seventh from the bottom. And the U.S., our other primary home, is smack dab in the middle.

That’s right. The U.S. comes in at #94 most peaceful, below Kazakhstan, Liberia, and Nicaragua.

How is this index measured, and by whom? It’s from The Institute for Economics and Peace, an “independent, non-partisan, non-profit think tank” out of Sydney, New York, and Mexico City. They use 23 measures in three broad categories: the level of safety and security in society, the extent of domestic and international conflict, and the degree of militarization. There’s tons more information inside the report or on their interactive website if you’re curious, as I was, including the $2 trillion cost of non-peace in the U.S. alone.

This is really unflattering information, unless you’re Canadian. So what exactly are my motivations for posting this??

I know what you’re thinking. Data schmata. Years ago I worked in a reporting function at a time when companies were eager to measure everything. “Metrics” was the key word of the year, and if you threw it around enough times you might get a better bonus. (Have you got any metrics on that, Bob? How are our metrics looking, Kathy?) Our intentions were good; this was in the years following the spectacular unraveling of Enron and the advent of Sarbanes-Oxley legislation. But like any good pendulum swing, eventually we reached a point where we felt measured-out. Data is important and can be enlightening, as long as we remember it doesn’t always paint a perfectly complete picture. South Africa is low on this list, for example, but we’ve visited several times and would go again tomorrow. Knowledge of their stats, however, keeps us alert and from doing too many stupid things when we’re there.

And so, without further undue ado, here’s the list, annotated with our own travel notes since 2010: 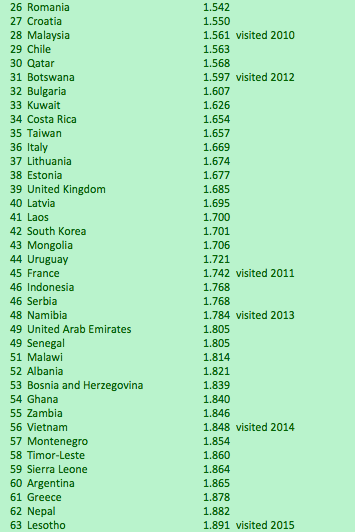