There must exist a handbook that every trinket-selling person across the globe has a copy of, and this must be its title. I’ve heard it from hawkers in South America, Mexico, China, India (oh my god, India!) and now, all different parts of Africa. In some cases it’s the only English some of these guys know, but they say it proudly and repetitively, despite the smirk it always elicits from me. As if all their competitors give me bad price.

Around the world peddlers can be extremely aggressive and persistent. In Zanzibar, row after row of shops had somebody out front saying, “Jambo rafiki, karibu” (hello friend, welcome) followed by, in English, “come in, come in, only looking.” Of course it’s not only looking, though, once you step inside. In Vietnam there was the woman pushing a bicycle loaded with ball caps who followed us for blocks, repeating “Mister, mister, mister…” We told her no politely, then a block later we said no again more sternly, but she wouldn’t give up. We thought we’d have to pull some kind of fancy evasive maneuvering to shake her off our trail.

In central Africa it’s no different, except it feels slightly more desperate, if you can imagine that. Two things you’ll hear in nearly every transaction with a trinket-seller here. As soon as you’re within earshot they will call you over with the promise of a “bon prix.” (Good price.) And once you start negotiating, which is 100% expected and seen as sport, your lowball offer will be returned with the classic retort, “Mais c’est la business!”

And they do something with their eyes when they say this. It’s a look that invites you to feel sorry for them. A look that inspires a lot of guilt about your position of relative privilege. Sometimes they’ll tell you about their superstitions, about setting them up for good luck if you buy now because you are their first customer of the day. Or they’ll tell you you’re their last chance before they close up shop for the day, and no one has bought from them all day. They need something to bring home to their family.

Worse, once you show the slightest bit of interest in an object, you are not allowed to exit the transaction. Many times when I’ve tried to tell someone that I’m just looking, I’m not ready to buy yet, they respond with protestations ranging from “But I’m hungry!” to “But you bought from my neighbor, what about me?” to “No no no, madam, don’t leave, give me your best price.” Sometimes things reach an intensity that scares me. When I try to be tough and walk away anyway, I hear all kinds of curses hurled at my back.

Seb and I have coined the term “charity buy” for these cases where I find it too difficult to say no. If it’s something small, anyway. I do have my limits.

In most cases it’s not charity at all. I’m happy to be able to purchase local arts and crafts, happy to give some of them away to friends and family on our infrequent trips home, and happy to support someone who’s just trying to make a fair living. Business is business.

Back in 2011, one of my earliest “negotiation” attempts… the fellow on the far left (the one with the big belly holding the statue) told me he was “hungry” in response to my preferred price for the statue. I patted him on the belly and said, “I don’t think so.” This made him and everyone around him laugh, thankfully. (I think I still overpaid, though.) Ruashi malachite market, Lubumbashi.

Not the most flattering photo of me, but I think it shows the chaos of the situation… multiple vendors crowding in, all wanting to help by offering something different along with their “good price,” and me barely keeping track of deals made and deals lost. 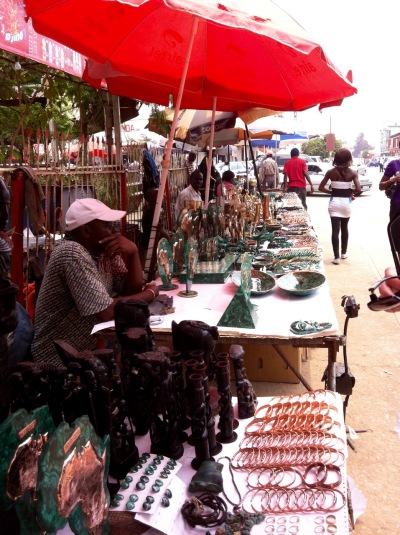 Another outdoor malachite market, downtown Lubumbashi, September 2013. This one is less crazy-making than Ruashi, but only slightly. 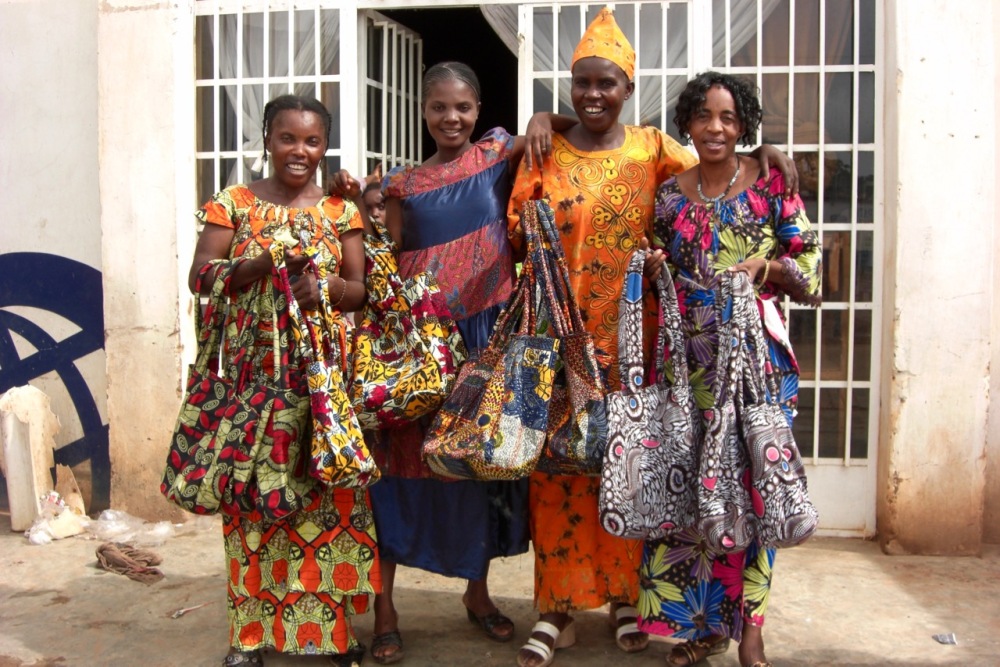 Have I told you the story of these tailors yet? It is a cooperative of (mostly) women, started by a group of widows who received a loan from our company to start their business, which appears to have gone gangbusters. On our first visit back in June, 2011, a gal from the social department wanted to introduce us, and we were greeted warmly, with song and dance.

They were especially thrilled to meet Seb, the man behind much of their income: making sample bags for the geology department.

Later in 2011 I took the other ladies to meet the tailors, and we’ve been bringing them business (dresses, purses, bags, etc.) ever since.

Photos of the tailors: Association Couturière pour la Relance de la Femme Rural, Fungurume, 2011. (By the way, negotiating with these fine ladies isn’t difficult or trying. Except for that one girl that one time who sidled up to me while I was holding a pretty pagne and said, with narrowed eyes, “Il faut me donner.” You should give that to me.)

Featured photo at top: a local vendor selling me malachite earrings for a “bon prix.” November, 2015.