A few months after we moved here, Seb’s chief geologist and Congolese mentor Papa Nzita invited us to meet his family and have a look around his adopted hometown of nearby Likasi, about two hours east by dirt road. Built up by the Belgians who originally called it Jadotville, Likasi was once one of the crown jewels of this region, even considered a tourist destination in many travel books of the time. Fifty years later and you can still see the beauty of the place… if you look with Congified glasses. Ignore the potholes, the peeling paint, every third abandoned or crumbled building and you’ll discover the skeleton of a beautiful colonial capital. Wide tree-lined boulevards, grand art-deco buildings, and roundabouts with large fountains (some of them even with water!). Surprisingly, I’m taken by the place. If Seb’s job took him this direction, I’d be happy to settle in here.

a view of downtown Likasi

Likasi (pop ½ million) along with Kolwezi to our west are the two of the still-active capitals of copper here in Katanga province, both cities master-planned by the Belgians. Our little village of Fungurume, smack dab between the two, is rich with copper too but totally hick in comparison. Likasi and Kolwezi have actual grocery stores! Bakeries, butcher shops! Restaurants!

Well, maybe that’s a stretch. My Bradt guide to Congo says there are only two restaurants in Likasi, neither of which could be described as spectacular nor inspiring. I would have to agree with that assessment… but we’re easily impressed after spending the past few months without very many options.

When we first arrived in the morning, Papa Nzita took us to see a hidden treasure: the mineral museum of the state-owned mining company, La Générale des Carrières et des Mines (Gécamines). He had made an appointment, yet when we arrived the place was locked up and quiet. We woke a napping security guard who stumbled to his feet and saluted Papa Nzita. He said he would find the responsible keyholder for us, maybe in a half-hour or so. In the meantime we headed off to overlook Gécamines’ processing facilities.

The place is pretty quiet. There’s still plenty of profitable ore in the ground (even in the waste piles, the copper is so rich here), but they’re not very well-equipped operationally. The original mining company here, Union Minière du Haut Katanga (UMHK), was nationalized by Mobutu in 1967, seven years after independence. At the time it was the biggest copper & cobalt producer in the world, and the powerhouse of the country’s economy, accounting for 70% of export revenue. But according to many sources, Mobutu used the wealth of these resources to pad his personal bank accounts, handsomely paying off those in charge to re-direct the funds. He grew fat and rich while his fellow Congolese slipped further and further into poverty, slowly but surely running the mine (not to mention the country) into such high debt they’ve never fully recovered.

Another sad claim to fame for this region: Nearby lies the Shinkolobwe uranium mine, the birthplace of the very uranium that powered the Hiroshima and Nagasaki bombs. The Belgian director who secretly managed to ship over 1,000 tons of uranium to a warehouse on Staten Island two years before anyone wanted them was either extremely prescient, or extremely shady. But as with so many other minerals, Congo holds the world record for mind-melting concentrations: the uranium from Shinkolobwe tested 80% pure when it was discovered in 1915. Today the mine is supposed to be sealed and secured, but rumor has it artisanal miners continue to exploit and sell black-market ore with concentrations of 20-30%. (By way of comparison, the next-richest ore bodies in the world are less than 1% pure.)

After these sorts of contemplations, we ventured back to the mineral museum to see if we’d be able to enter yet. We could. I think neither Seb nor I was expecting to find much inside this dusty old quiet building, but happily, we were wrong. One geologist proudly showed off several specimens from his home country that made the other geologist say, more than once: Wow! (As for me, I just admired the pretty colors.)

where copper comes from

where cobalt comes from

where uranium comes from

After the museum visit, we went out for the infamous less-than-spectacular lunch. It wasn’t bad, honestly, and kind of an attractive spot. Plus it’s always nice to sit down with a beer and just talk. Papa Nzita gave us his take on his country’s problems: jealousy, corruption, beliefs in sorcery, people poisoning each other. He says the number one thing holding his countrymen back is jealousy. No one wants to see another succeed and leave them behind. A friend described this later as a pot of boiling crab soup. If one crab tries to climb out, the others pull him right back in again. 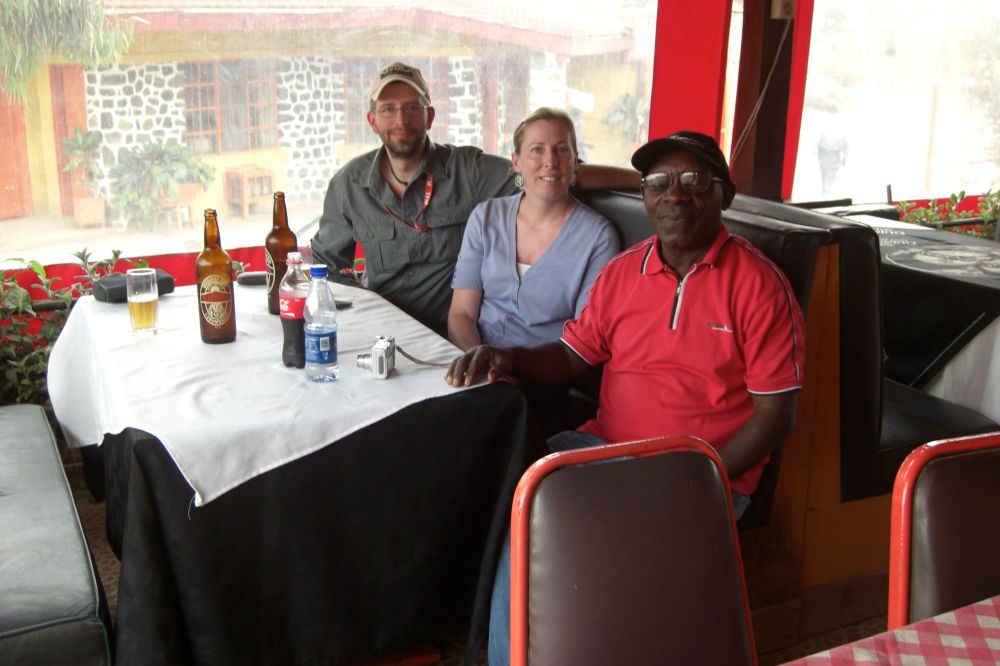 With our undercooked pizza and the driver’s $25 T-bone polished off, Papa Nzita then decided to take us for a walk through a local market. Every now and then people would decline to be photographed when I asked their permission. One of the decliners had quite a lot to say in a language we didn’t understand, which made Papa Nzita laugh and shake his head. He explained to us that the woman believed in sorcery, and that if we took her picture, we would be stealing her soul.

market boys, apparently not too worried about their souls 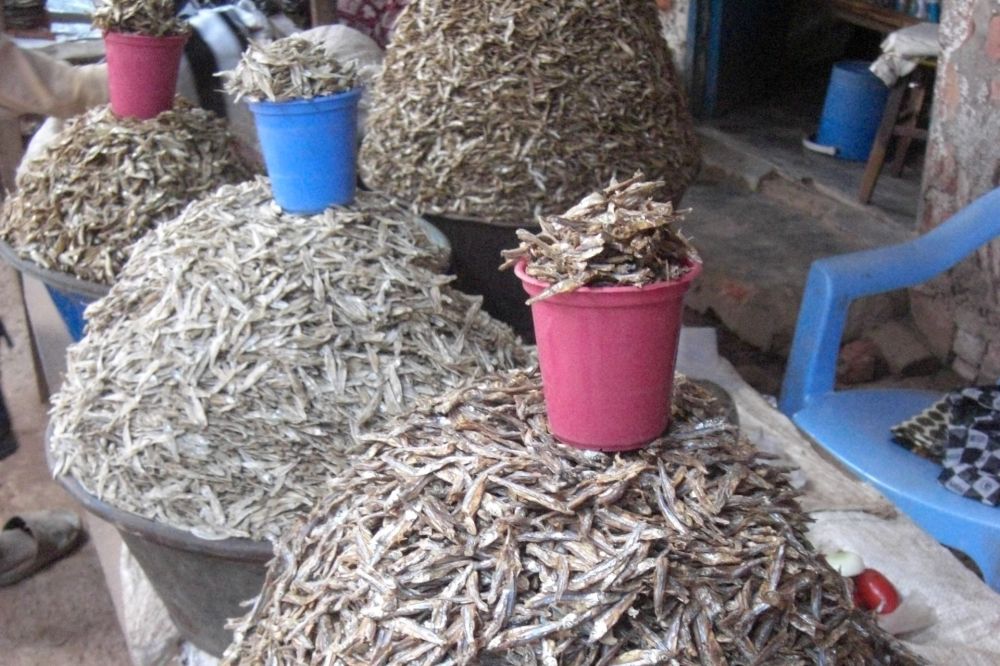 Loose-leaf black tea (called “chai” in Swahili, which got my attention and suddenly gave me a Starbucks craving) and some veggies in hand, Papa Nzita then asked if we wanted to see another market. We paused, thinking it was probably not necessary, until he emphasized it would be a “real” market; i.e., on the other side of the tracks. Seb and I exchanged looks, thinking, well it’s not as if this one resembles a Safeway back home, how much more real can it get?? But oh boy, were we in for a shock.

As we drove literally across some train tracks, Papa Nzita explained that we were leaving the “new” part of town, the side the Belgians had built up, and heading into the section where the “real” Congolese people live, a sort of shantytown that made the maintenance of the other side look like Walt Disney World. Soon we were heading down a gravel road with ruts big enough to swallow us whole. At the slowest speed possible we were holding on for dear life, our seat belts cutting off circulation. People stared in at us through the windows. We couldn’t say a word — and I don’t mean we were speechless, I mean it was physically impossible to use a larynx. 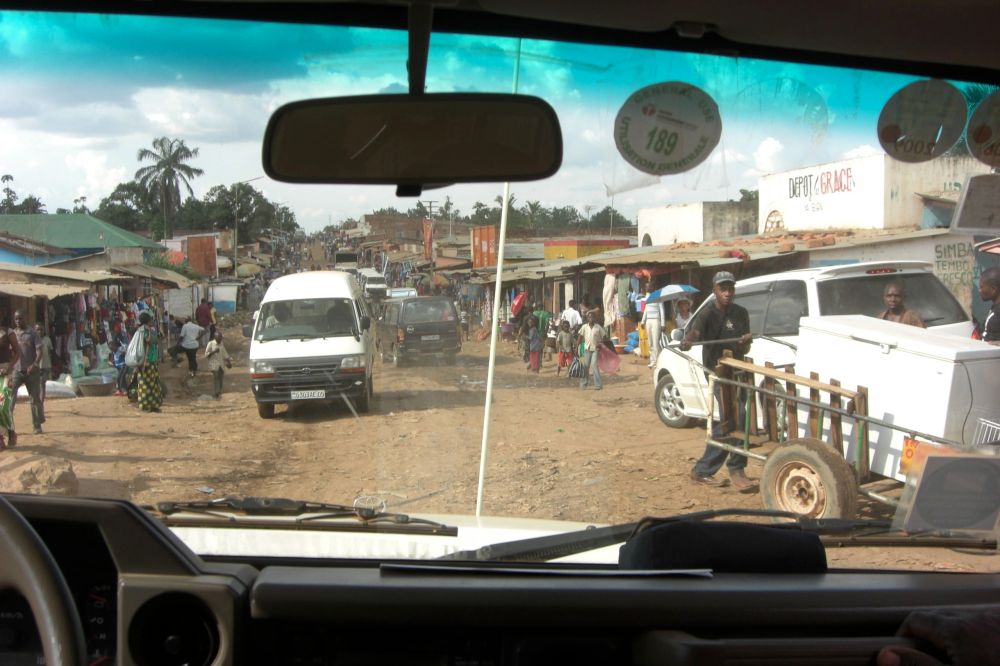 Somehow our driver “parked” where instructed and Papa Nzita led us down a narrow path until we entered a large, covered space. From there, it’s a blur. I remember what felt like hundreds of faces turning at once to look at us; then a pause; then a cacophony of voices screaming “mzungu!!”  Somehow we moved forward as if in a trance. I remember tons of smiling faces, hands that reached out to shake mine, or to touch me as I walked past. All three of us remarked at the same moment that it was me they were interested in, not so much Seb (who, admittedly, wasn’t smiling back like I was; he was mapping out an escape route). Papa Nzita said with a laugh, “White women never come here, they are surprised and happy to see you.”

I only wish I could have repaid their curiosity and kindness with a few purchases. But our escort had other plans and led us very quickly through the market and out again, probably only five minutes in total. It was one of the weirdest five minutes of my life. Maybe this is what it would feel like to be a celebrity stepping onto the red carpet while hundreds of cameras flash simultaneously. Ha! If you ever want to feel special and sort of famous, just book a trip here.

Likasi has one final surprise up its sleeve for me. Just a month after moving to Fungurume, I found out that we have family history here. My aunt has an aunt who lived in Likasi from 1958 to 1963. What a small world! Originally a Kansas girl too, she came here as a missionary’s wife with four children and wrote a fascinating account of that crucial time when the Belgian Congo ceased to be Belgian. But it’s her accounts of everyday life and inner motivations that I love the most. Her stories read like Barbara Kingsolver’s “The Poisonwood Bible” — both are funny, heartbreaking, and bluntly on-point.

And the coincidence doesn’t end there. One evening as I was talking about this family discovery at a social function here at base camp, our next-door neighbor at the time mentioned that he actually knew my aunt’s aunt’s family! He grew up here in Congo as a missionary kid and knew her kids. Fast-forward a couple of years to another coworker-turned-friend/former missionary kid, who not only knew the aforementioned missionary kid, but also worked with my aunt’s aunt’s son in the Peace Corps! Oh, and he’s originally from Kansas to boot!

This must be why Likasi feels a bit familiar, like I had visited before in a dream, or another life. So many people in my life, even those I hadn’t even met yet, have left traces of themselves in these places. As my aunt’s aunt described it perfectly, it’s like we’re “completing the circle.”

Mulungwishi Methodist campus — many friends & family have passed through here