Hello everybody, hope you had a fantastic Halloween!  I enjoyed hearing stories about Seb’s niece Charlie-Rose dressing up as a skunk, and my nephew Ethan as Buzz Lightyear, even sharing his own loot with kids who later came to his door!  Ethan might be an exception to my story later on about sharing.

But first, speaking of adorable little kids, I forgot to mention something in my earlier stories about our adventures in the Fungurume market.  There are a dozen or so little boys that follow us around the market, trying to sell us plastic bags for 200 francs (that’s about 20 cents) every time we buy some produce.  One little cutie who couldn’t have been much more than 4 years old quickly made change for our 500-franc note, in 100 and 50-franc bills, using one hand.  We were impressed.

Oh, another story I left out, though on a less-pleasant note:  While walking through the market I saw a pig-shaped hunk of carcass hanging upside down, and asked if it was indeed a pig.  Our guide Jean-Pierre casually replied, “Nope, that’s a dog.”

(To be fair, it’s not that common – he said there are only one or two particular tribes in the area that eat dog.)

As for new news around here, let’s see…

The geology department surprised us with a welcome party.  I guess they wanted to get a good look at the wife of the young manager.  Everyone got dressed up and had a big dinner, complete with speeches and gifts.  They presented me with a copper etching of a woman carrying a water bucket on her head, and told me that keeping a happy home is important for Seb to do well in his job.  (Of course, Seb had to translate the French for me, so maybe he snuck that one in himself.)

The department has only a couple of female employees, so here we are at the girls’ table (plus Destin, who I suspect has a crush on one of us).  Remember I mentioned the Congolese often don’t smile in photos?  Just before the camera appeared, we were laughing and having a grand time.  When the photographer (Seb) said, “Smile!” they all either looked away or frowned.

A couple of happily unposed moments: 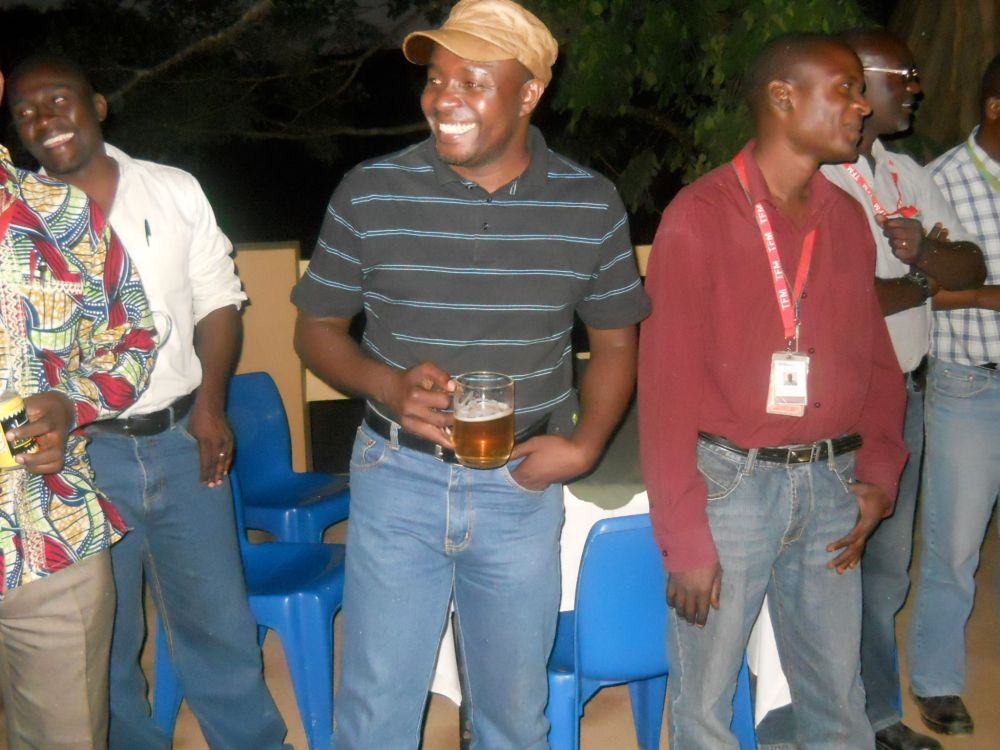 The department also presented both of us with clothes that a local tailor made (although, uh, without taking our measurements first)…

In other news, we joined a “fun run” from base camp to the mine airport one Sunday morning, though neither one of us ran.  Ha!  Seb biked, and I walked.  It was 12 kilometers long, a pretty good distance.

The third-place men’s winner, Moni, who works in the fitness center.  I saw that the winners of the New York marathon this weekend were from Ethiopia and Kenya – not a surprise! 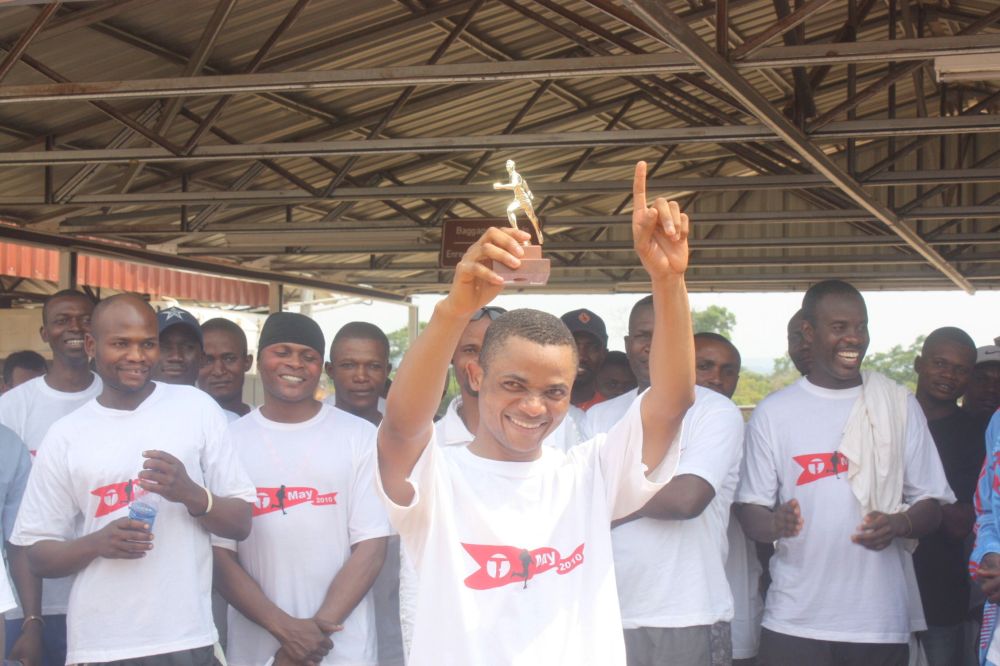 Later that same evening, with blisters on my feet, I competed in the semifinals of a week-long tennis tournament — and lost, badly.  The only reason I made it through the first two rounds was because I was always paired with someone very good.  (It was a mixed-doubles tournament with random drawings for partners each time.)  Playing single-set doubles with novices equals a pretty slow-moving game.  It felt like I got the ball only four times in each game, and with a 50% error rate, I had about two winning shots per game.  I served once maybe twice per game, and was happy to only double-fault once in the entire tournament.  (Of course, my serves are best described as “gifts” to the opposing team.)  Each time I progressed to the next round, my coach Moni, pictured above, would look at me, smile, and say, “You are lucky.” 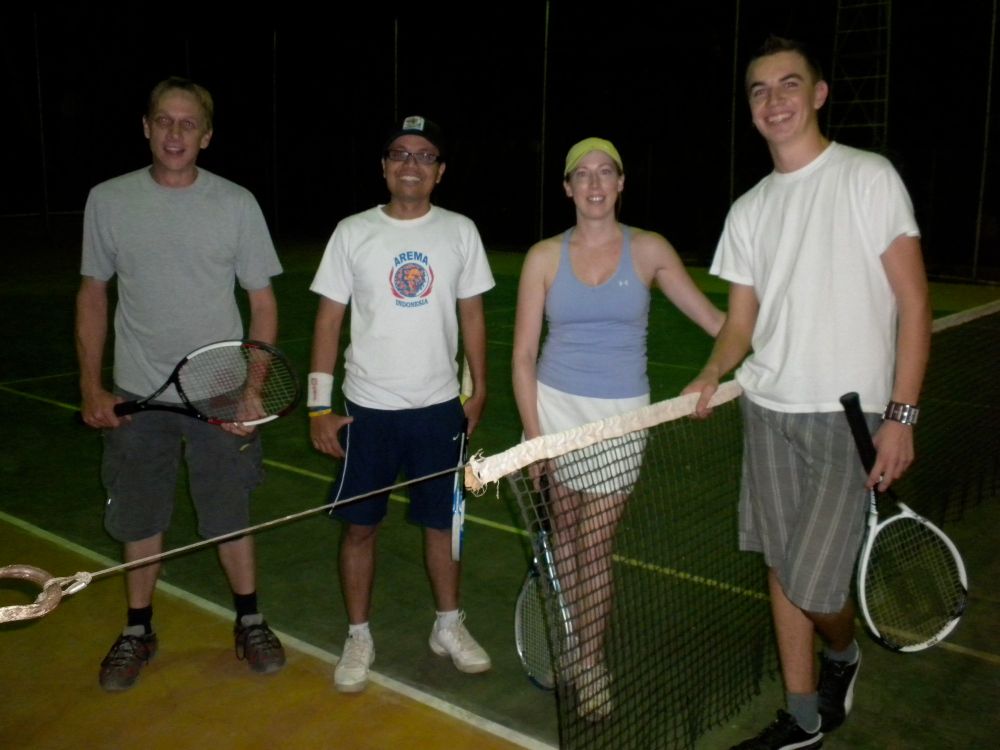 Rainy season is here; it officially started October 12.  This is the time to watch out for snakes and mosquitoes.  A neighbor recently told us he “guarantees” we’ll find a black mamba somewhere in our house within a year.  Come December it’s supposed to rain every day, but so far it’s only been a few times a week.  But they can be fantastic storms — lots of thunder, lightning, and heavy winds.  In fact, last Saturday there was a tornado in Fungurume, affecting 300 homes.  Twenty-five guys on Seb’s staff lost all or part of their homes. 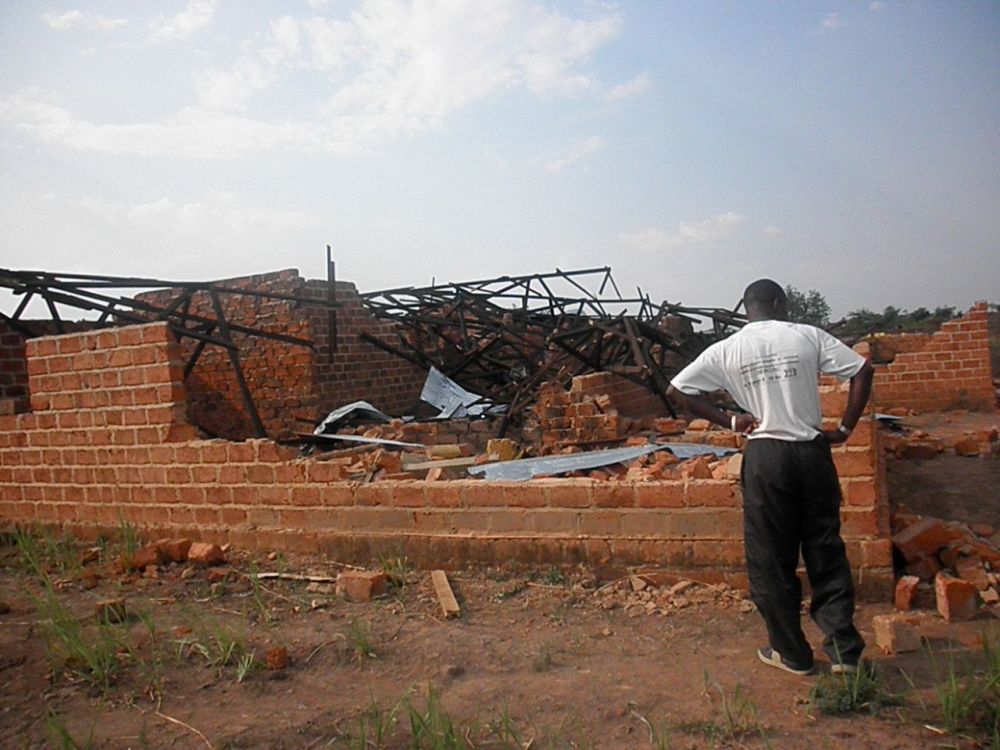 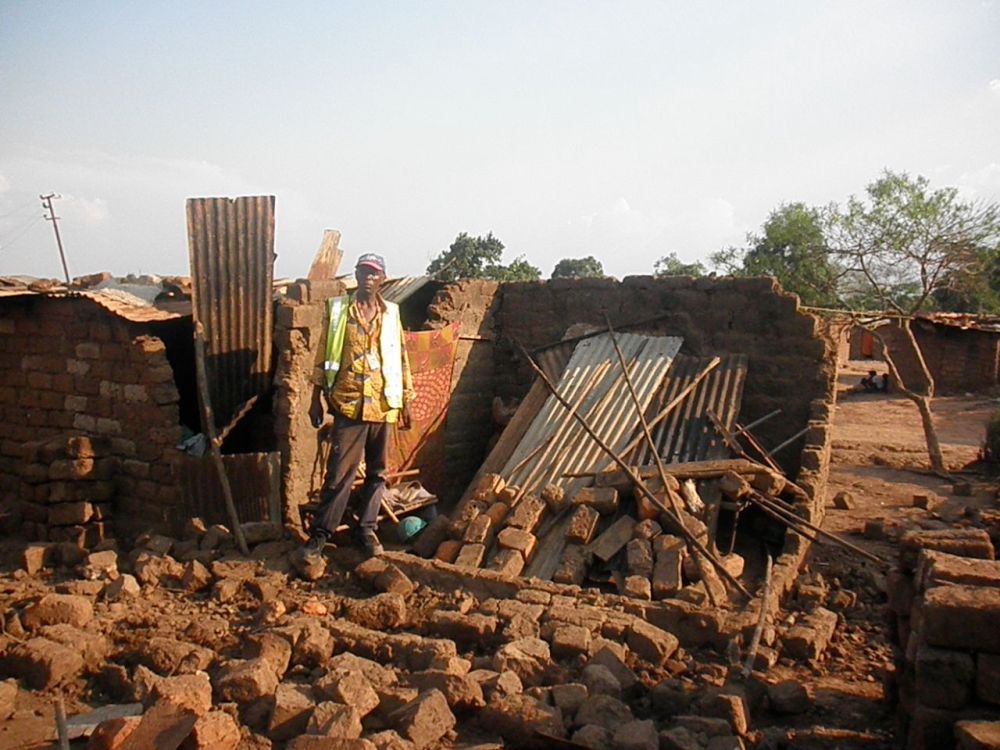 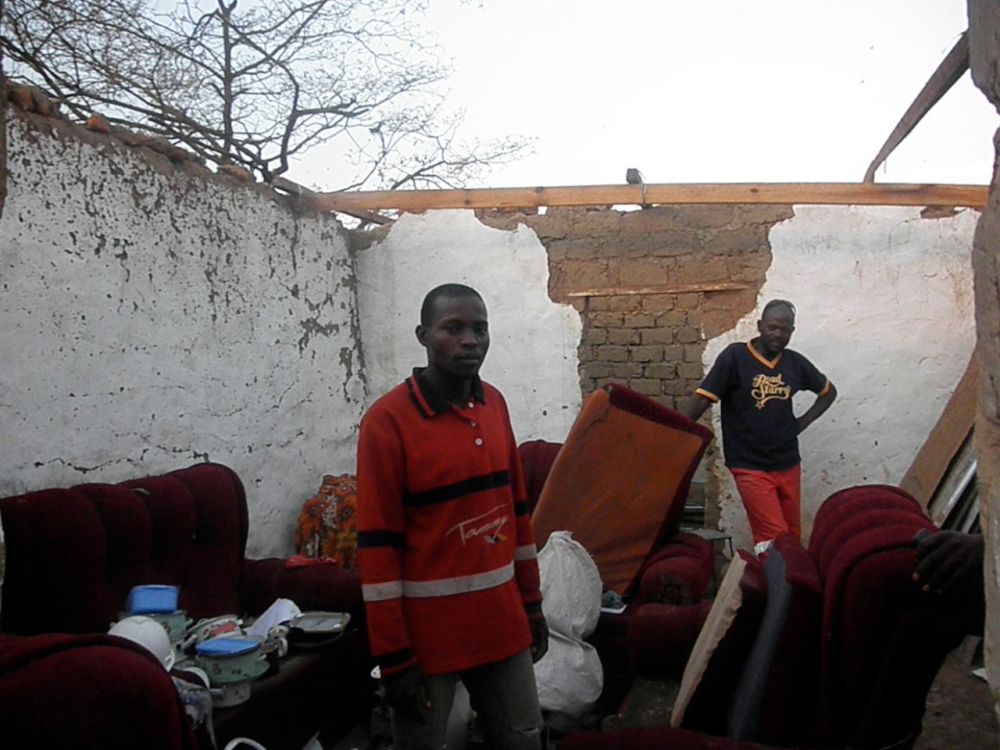 One guy was just about finished building his home, and his wife and child were getting ready to move in from Lubumbashi.  He had built it piece by piece, slowly over the past 2-3 years as he could afford to (there’s not really “credit” around here).  He had sunk nearly $25,000 into it.  Construction requires a full-time security guard to sit at the work site and make sure looters don’t run off with materials.  The security guard and his son were there during the storm, and both were injured.  The dust had barely settled before neighbors took off with all the debris.  His house is now gone and he must start over.  (There’s nothing like insurance around here, either.)  The furniture was on its way; thankfully it hadn’t arrived yet or the losses would have been even worse.

This “neighborly” attitude is a strange thing to witness.  You would think that punishment for doing such a thing would be swift and harsh and would serve as a deterrent.  But the prevailing custom around here is “each man for himself.”  This is NOT what I learned about African culture in general when I studied with Thunderbird last spring.  African culture is supposed to be about “we,” and they frown upon the actually quite Western standard of the all-important “me.”  But Congo is not a typical African culture.  I’ve mentioned a few times their rankings on poverty and corruption — which I suspect go hand-in-hand; being mired in one kind of disables you from battling the other.  Average life expectancy is 46 years, and 76% of the population is considered undernourished.  These people have been through hell, and all they have learned by example over the past century (not just from Mobutu but King Leopold of Belgium too) is take, take, take, and the only time that matters is NOW.

Last weekend we celebrated a birthday at a nearby Spanish Catholic mission (Lukutola), and while we were enjoying a buffet on the back patio, kids lined up outside the gate to watch us and beg for food.  After awhile there were three persistent souls left.  After asking the missionaries for permission first, we handed the three little boys a box of crackers through a hole in the fence.  The first boy to get his hand on them took off running, leaving the other two behind.  We were stunned.  Surely the other two will take some sort of revenge the next time they see him, which is inevitable.  But that was apparently not as important as getting that box of crackers all to himself for now.

Although we might draw it differently, there is a line here between “normal” stealing and too much.  Even Mobutu used to say “It’s okay to steal as long as it’s a little.”  Maybe the looting of construction materials and running off with crackers is tolerated.  But recently a Congolese employee ran off with $143,000 cash that he was supposed to safeguard for a social project.  The money was supposed to go to entire villages of people who were being resettled due to mining activities.  This guy, we’re pretty sure, had to leave town.

All of this has got me thinking about the concept of sharing.  I’m no psychologist but I would venture a guess that sharing is learned behavior; it’s not entirely natural.  How many kids have to be taught while playing with each other that they must share their toys?  It’s a concept that we struggle with throughout our lives – we have to keep remembering the lesson.  (Please tell me it isn’t just me!)  It’s not too hard when we have plenty to give, but sharing becomes very difficult when resources are scarce.  Last week, on our weekly grocery shopping trip, the store had a special inventory for us of red and yellow bell peppers.  It was the highlight of our week!  Normally the produce section consists of onions, potatoes, tomatoes, green bell peppers, cabbage, apples and oranges.  Sometimes we have lettuce, sometimes carrots, but that’s about it.  (Compare this to the produce section in your grocery store.)  Well, imagine 6 expat wives doing their weekly shopping, bored with all the usual recipes, trying to share this one measly basket of peppers.  Everybody wanted to pick the best ones first, everyone wanted like 8 of them… there just wasn’t enough to go around.  Tensions were high, people got trampled on and feelings hurt… it was pretty ugly.  If this is how desperate WE become, when we get to go home to nice, safe, well-furnished homes, imagine how desperate those who are very poor must feel.

Well, the electricity just went off, so that must be my signal to wrap this up.  Of course, I’ll have to hit “send” later since the network is down too.  We lose electricity maybe 3-4 times each week, but not really for more than an hour each time.  Last week the water was shut off twice, unexpectedly, half a day each time.  It’s these moments when I realize how much I depend upon these things, how crippled I feel without them.  Doing dishes with a bucket or two of water, like the locals do around here, would be a learning curve for me.  So this Thanksgiving, give thanks for food, water and electricity.  Such basics that we take for granted, yet so many millions (maybe billions) of people around the world don’t have them.  Oh yeah, and insurance too. 🙂

Talk to you soon,
Jen

P.S.  I discovered that for about the past month, none of my emails are getting delivered to “cox.net” email addresses, even though I don’t get any “undeliverable” errors back.  I think it’s due to our servers being routed through Nigeria.  Seriously.  In the rare instances that I can get online, websites always assume my location is Nigeria.  We were searching for hotels over Christmas vacation and came across more than one website which said “We’re sorry, but we cannot confirm availability over the web for Nigerian customers.  Please contact us via phone.”  And another that wouldn’t accept our credit card until we had sent copies of our passports and both sides of our credit card.  Geez.