Before turning to WordPress for help with the your-emails-come-from-Nigeria-therefore-we-will-block-them problem, I used to send my travel stories to friends and family via email.  Below is an archive of those.  If you’re new to my blog, these may help give some background to who we are and why the heck we are in Congo.  (And if you were a cox.net customer in my address book at the time, you may have missed some of these!)

For the record… I started working on this blog in November, and didn’t actually “publish” it until… umm, August?  Such is the speed of the internet here.  Don’t get me wrong, I’m grateful we have internet at all… I’m just sayin’.

As a result, the “date published” of the stories below match the date I emailed them, but posts since then have been artificially engineered to match the actual date of the event.  Well, some of them.  A little confusing, maybe, if you’re watching closely…

ok, actually emailed on December 17, and also after a few cocktails…

Hello everybody, I hope you had a wonderful Thanksgiving and are gearing up for a fantastic Christmas!  My apologies for being incommunicado lately… every waking minute with my computer has been focused on vacation planning.  Lemme tell ya, when every click takes 5 minutes to respond, and mysterious “disconnection” and “quota exceeded” errors pop up each day to contend with, planning a vacation to — where? anywhere! — can be a tall order.  This one took me two months.

But finally all the tickets were ordered, and all the hotels connected by train, plane, or boat, and vacation we are now on.  Southeast Asia was the call… and not because we don’t want to see more of Africa, but because Asia was on our must-see list first.  And living in the eastern hemisphere has its advantages. END_OF_DOCUMENT_TOKEN_TO_BE_REPLACED

Hello everybody, hope you had a fantastic Halloween!  I enjoyed hearing stories about Seb’s niece Charlie-Rose dressing up as a skunk, and my nephew Ethan as Buzz Lightyear, even sharing his own loot with kids who later came to his door!  Ethan might be an exception to my story later on about sharing.

But first, speaking of adorable little kids, I forgot to mention something in my earlier stories about our adventures in the Fungurume market.  There are a dozen or so little boys that follow us around the market, trying to sell us plastic bags for 200 francs (that’s about 20 cents) every time we buy some produce.  One little cutie who couldn’t have been much more than 4 years old quickly made change for our 500-franc note, in 100 and 50-franc bills, using one hand.  We were impressed.

Oh, another story I left out, though on a less-pleasant note:  While walking through the market I saw a pig-shaped hunk of carcass hanging upside down, and asked if it was indeed a pig.  Our guide Jean-Pierre casually replied, “Nope, that’s a dog.” END_OF_DOCUMENT_TOKEN_TO_BE_REPLACED

Hello everyone and happy Monday!

Yesterday we took another walking trip into Fungurume to get fresh bread and vegetables at the local market.  It’s becoming kind of our “regular” Sunday morning activity — a little exercise, sun, and cultural adventure.  We went with our friend from the Canary Islands, Sergio, who has a gift for picking up languages.  He’s fluent in Spanish, English, French, German, and is quite good in Swahili and even Sanga, the local local language.  He was able to converse with people along the way (more than our usual “Jambo!”) which made it a little more interesting.  This time we ventured into the non-food section where we bought clothespins, a funnel, and a t-shirt.  Here’s Seb modeling our local fashion find!

END_OF_DOCUMENT_TOKEN_TO_BE_REPLACED

I hope the first two editions of “Adventures in Congo” have left you craving more.  If not, as always, please feel free to write me back and request an “unsubscribe.”  You will then be moved from this list to my Grandpa’s email list, who never fails to forward a good joke.  (Daily.)

It has been a busy two weeks since I last wrote you!  We spent the past two Sundays — Sébastien’s only day off — trekking to the nearby metropolis of Fungurume, a town of nearly 100,000 people.  I mentioned earlier that we live just outside it, yet getting there is quite an ordeal.  To leave the gates of base camp, we have to notify company security, who both times have made a bit of a fuss.  “You mean la cité — the actual town?”  “Why do you want to go there?”  “What do you plan to do there?”  “Do you have an escort?”  Once we assure them it’ll be ok, they write down our names, take our phone number, and finally let us exit through the metal turnstile. END_OF_DOCUMENT_TOKEN_TO_BE_REPLACED

Well, we’ve made it through an entire week, and then some.  I’m sure there will be days ahead where I feel homesick, bored, or claustrophobic, but so far am happy to report that we’re having fun and enjoying being here in Congo.

I mention “claustrophobic” because our independent movement is limited to the concession that the company “rents” from the government, a large area but with navigable roads only stretching about 30 miles or so.  Seb has a company truck (which I’m not allowed to drive), but if we want to leave the concession, we have to hire a driver through the company.  Or we can fly on the charter plane on Mondays or Fridays, if there’s room.  Either way, the only place we can really go is Lubumbashi.  From there we can fly somewhere else, but it generally requires going to Johannesburg first.  So, let’s just say that “vacations” away from the concession are going to require more than a weekend, and a lot of planning ahead!

Last Sunday we drove around the concession, where I was happy to discover some villages right outside our camp.  Here’s a tiny one of just a few grass huts. 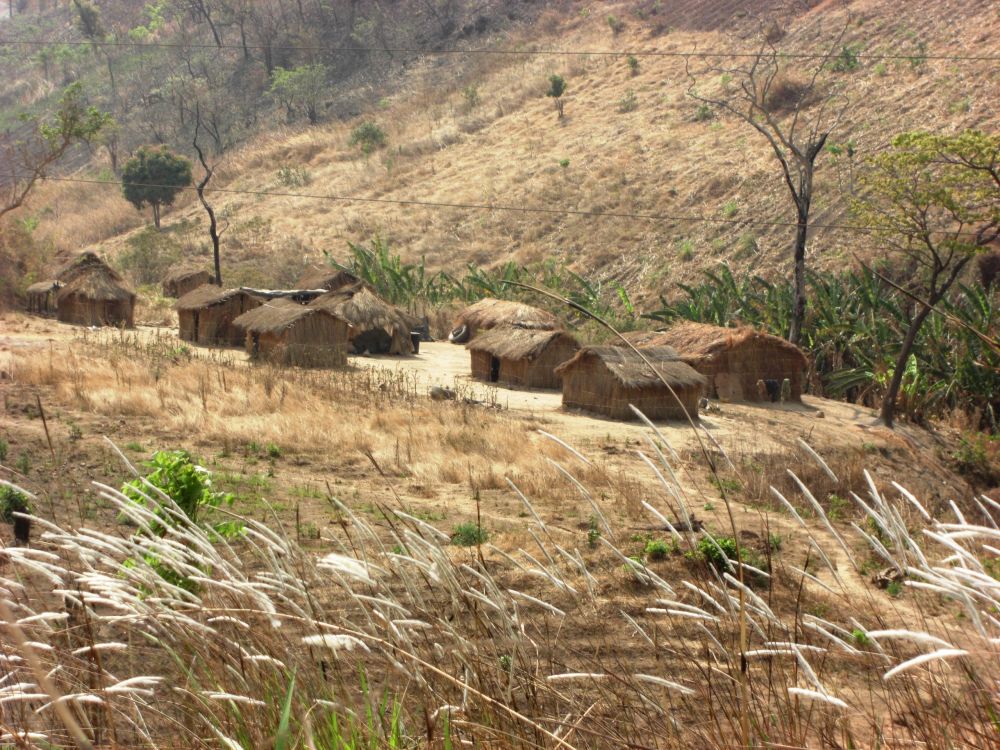 END_OF_DOCUMENT_TOKEN_TO_BE_REPLACED

Sébastien and I arrived in our new home in Fungurume, Democratic Republic of Congo, on Wednesday afternoon.  Only this morning did I find both internet access and a power adapter at the same time, so I can finally sit down and write an update.

Arriving in Johannesburg on Tuesday after the 15-hour flight from Atlanta was quite a relief.  We stayed in a nice hotel near the airport, had a fabulous dinner at a huge buffet, and got up early the next morning for our 3-hour flight on South African Airways to Lubumbashi.  The flight was packed with mostly businessmen, including a large Chinese contingent and many South Africans and Australians, and I have yet to figure out what brings so many professional people to this place.  The country has no major business going on besides mining, so I guess all these suits are involved in some type of mining negotiation??  Most negotiations involve the government, so I would think they’d be more interested in traveling to Kinshasa, the capital.  I suggested to Seb that maybe these people were transferring planes, and he laughed and said, “There are no transfers here.”  There were also three middle-aged white ladies all dressed up, huge Gucci and Coach purses included, speaking Portuguese and acting like they were heading to a beach vacation.  Hmm.  There were only a couple of plain-looking young ladies traveling alone.  In my imagination they were relief workers, Peace Corps types, the only story that really makes sense.  I wanted to walk up and down the aisles of our plane and ask everyone what their stories were, why the heck were THEY traveling to Lubumbashi. END_OF_DOCUMENT_TOKEN_TO_BE_REPLACED

Well, we are charging forward with our Africa plans!  Sébastien arrived in Congo last week, where he’ll spend the next month transitioning into his new job as manager of exploration.  He’ll come back to join me at my MBA graduation on August 20, we’ll take the following week or so to pack up the house, and then we’re off!  We’re renting the house to a good friend, have one vehicle left to sell, and no idea when we will come back.  One year is the minimum target unless something goes south in the company’s current renegotiation with the Congolese government… but if we can handle it, we’d like to be able to stay for two or three.

We used to laugh at the idea of moving to the Congo, knowing it was a possibility given Seb’s background in exploration geology, not to mention being a native French speaker.  No way would we ever go there!  Congo* is at the bottom of the world rankings when it comes to corruption and transparency; it’s one of the worst places to do business.  (That the company went ahead and set up operations there anyway tells you something about the potential mineral wealth there.)  The people are the second poorest per capita in the world, and in decline since 1980 despite their vast natural resources.  The country has been in near-constant conflict since 1996.  If you google it, you’ll finds all kinds of frightening stuff, especially in the Goma and Bukavu regions in the east near Rwanda and Uganda. END_OF_DOCUMENT_TOKEN_TO_BE_REPLACED