First up, two flights and a night in Johannesburg before the next-day’s flight to Singapore.  We almost blew the budget at dinner that night, we were so excited to be in the presence of an actual restaurant and on our way.  And despite arriving at the airport nearly three hours before departure the next day, we almost missed the flight to Singapore.  We stood in line for two hours at the cramped international terminal in a line that barely moved the whole time.  There seemed to be only two attendants working, and no self-service kiosks anywhere.  I finally went up to the empty “internet only” desk and asked if we could check in there.  We still have no idea what “internet only” means exactly, but we got through.  As usual, my husband encouraged me to travel with a single backpack; it helped that we didn’t have to check in any luggage.

Once on that Singapore Air flight, though, we thought we were in heaven.

After landing at 5:50am, we took a rather long sleep-inducing subway from the airport to the neighborhood of our hotel, the Ritz-Carlton Millenia.  At the exit, a sign indicated the hotel was to the left, so left we went.  Several blocks later we concluded there was no hotel that direction.  We backtracked, checked the sign again, shook our heads and headed straight for awhile to see what might be there.  Way ahead of us was an imposing structure that certainly looked like a hotel (it turned out to be the Marina Bay Sands, a Vegas-style resort that opened just a few months prior), and to our right was a relatively small, unmarked building.  I tried a few doors but could not get in nor identify it.  At the next intersection, even though we thought our best chances lay straight ahead, for some reason we turned right.  A block later we found the entrance to the Ritz, the same bloody unmarked building.  It was smack-dab right in front of the subway station, but without any doors or signs on that side.  In fact, the best way to get there was turn right and go through a couple shopping malls.  Annoying.

At the entrance to the hotel there was no sidewalk, just a long driveway going uphill.  Obviously no one walks to this place; they are chauffered.  By this time we were sweating up a storm — wearing warm clothes from the cold overnight flight, carrying backpacks now for a good hour, all in the intense humidity of Singapore — and here we are trudging up a hill not exactly intended for pedestrians.  Needless to say, as we approached we got a few strange looks; the staff surely thought these two backpackers were at the wrong hotel. 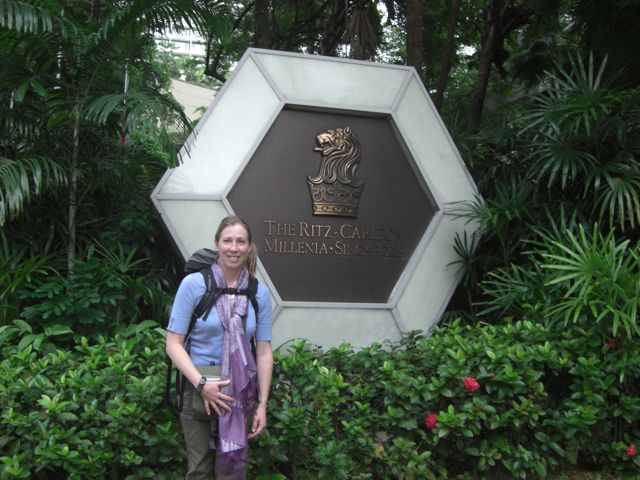 We stayed at the Ritz only because it was practically the same price as the regular Marriott, plus we get beaucoup points on our reward cards.  It was just a few blocks away from the famous, historic Raffles Hotel (too expensive for us, but at least we could admire it from the sidewalk).  The Ritz was nice and luxurious, as you would expect a Ritz to be, but our advice is NOT to stay here.  We didn’t have time to figure out where the “good” part of Singapore was, but this was not it.  The hotel was surrounded by a maze of criss-crossing shopping malls, sidewalks were non-existent even on main streets, and there was nothing interesting within walking distance except maybe the Raffles (or the Marina Bay Sands, if you have plenty of money to blow).  We also didn’t much care for the service at the Ritz.  A little hoity-toity.  Plus every little thing came at a hefty extra charge, from wifi to water bottles.  They even wanted to charge us an early check-in fee, when really all we wanted to do was drop off our luggage.

The views were impressive, though. 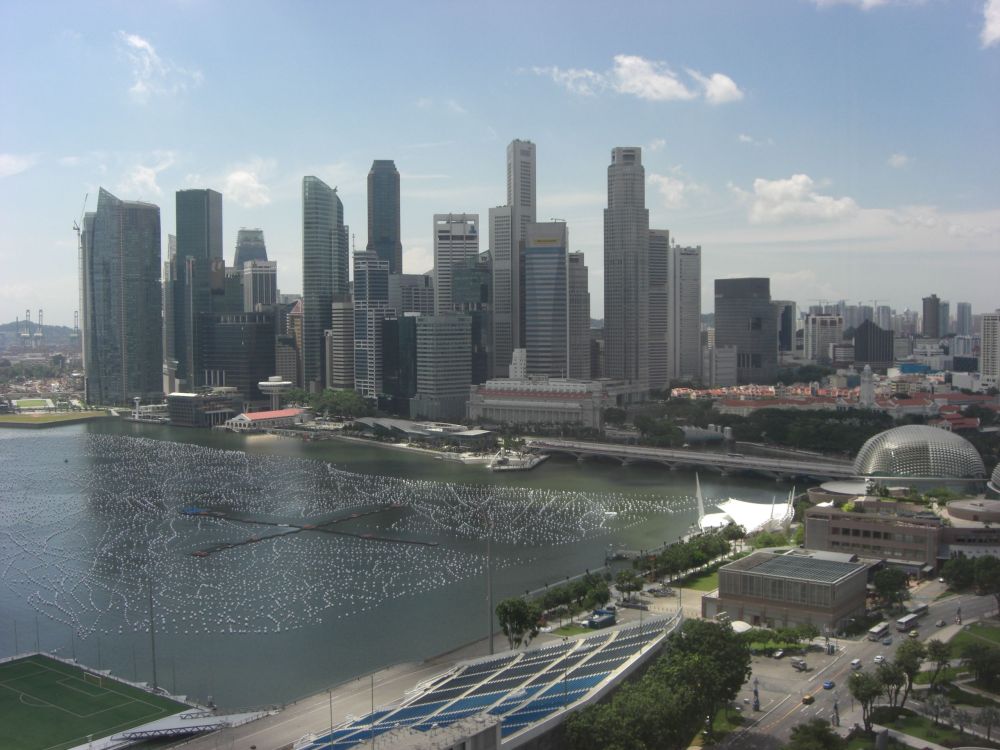 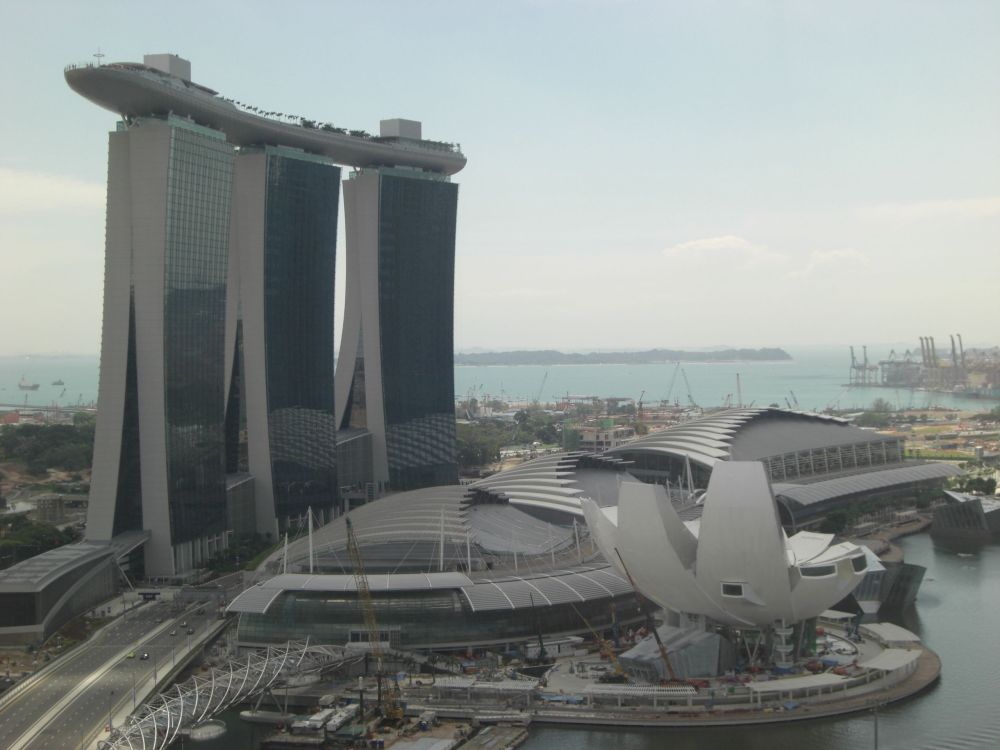 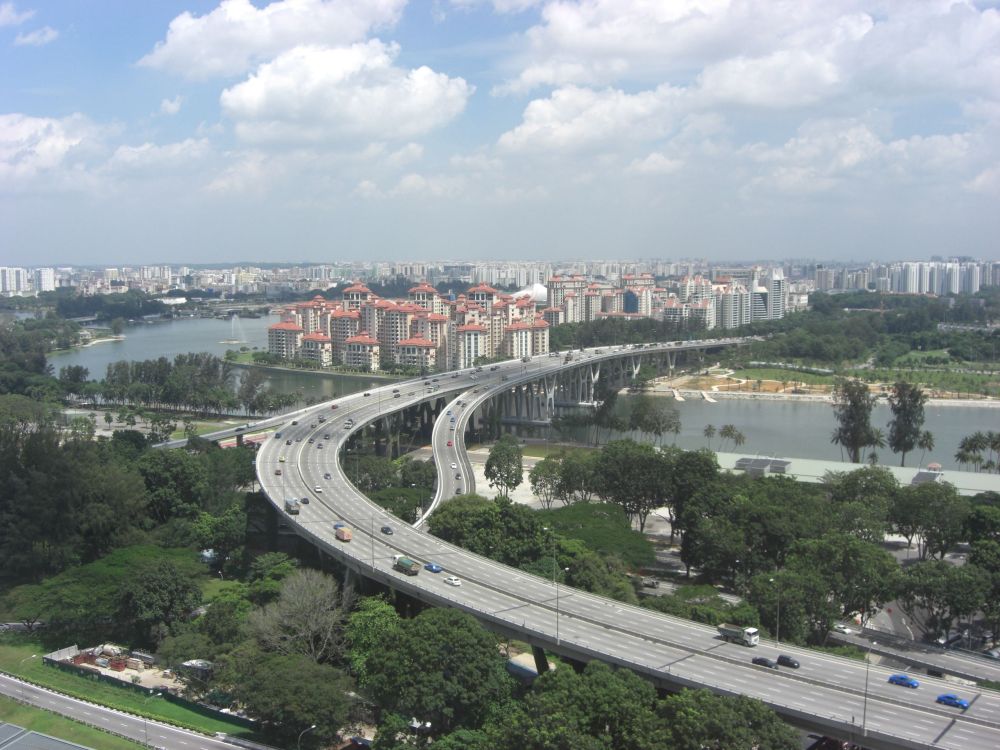 That last photo was taken from the picture window above the bathtub!

We set out for brunch and decided to see what the Raffles Hotel had to offer.  They had a cute little sidewalk cafe, where we decided to dive headfirst into the Asian culture.  Seb ordered the daily dim sum, and I went with the daily special, a weepingly spicy fishcake baked in banana leaf, called otak otak.  Afterwards we headed to The Long Bar, where the Singapore Sling was reportedly invented.  The place smelled musty, the service was slow, and we paid I’m not even kidding $45 for two not-so-great drinks.  (After that expense, we didn’t dare try the “Million Dollar Cocktail” in the Raffles’ Writers Bar.) 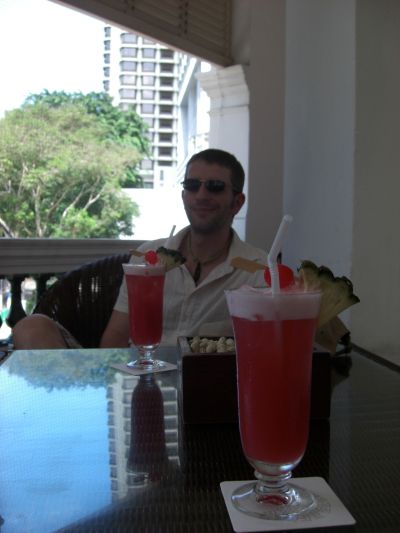 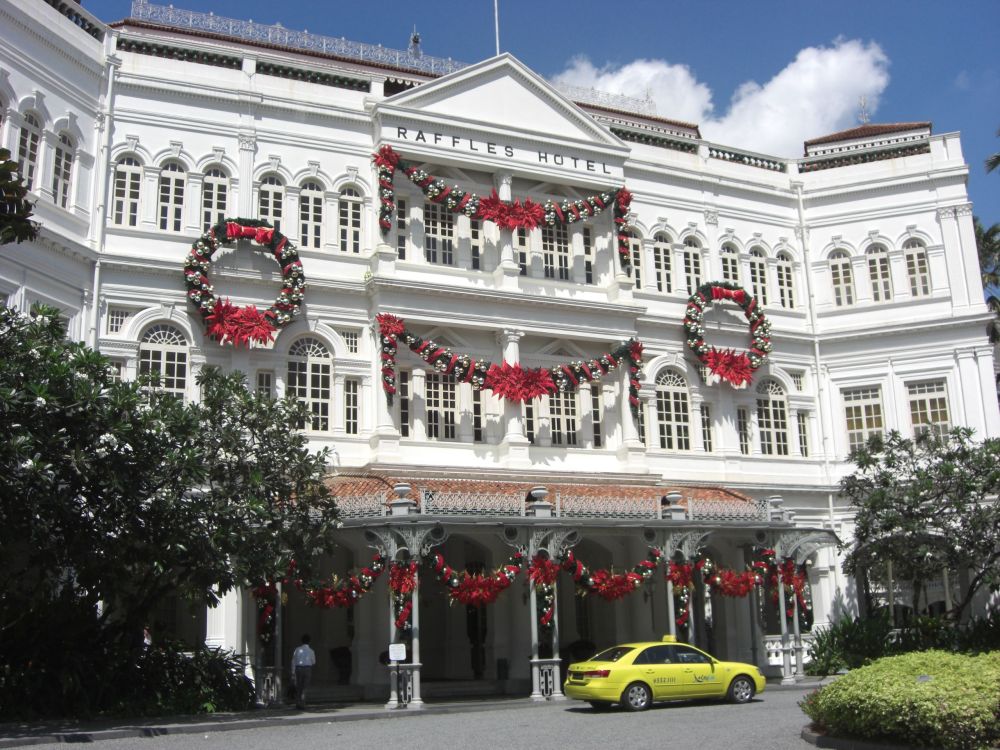 Though only 18% Christian, Singaporeans are crazy about Christmas!  Everywhere were Christmas decorations and Christmas carols, even the really religious ones.  We wondered how many people really understood the lyrics.  English is one of four official languages, but we had a lot of trouble communicating with random folks on the street while we were looking for the Ritz.

A little bit of shopping and unpacking during the afternoon, and we could barely drum up enough energy to go out for dinner.  We went across the street to one of the shopping malls and enjoyed more spicy noodles, chongqinq-style, at a dim sum restaurant right across the food court from a busy “Kenny Rogers Roasters.”  (Yes, there were McDonalds everywhere too… we even spotted a Carl’s Jr. somewhere in the city.) 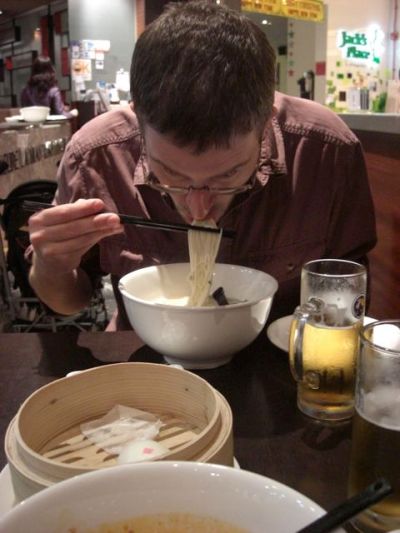 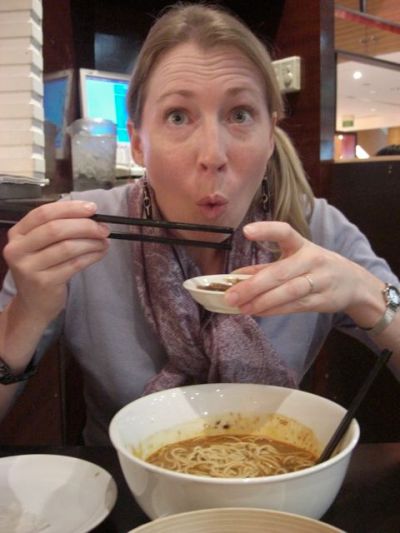 After getting some much-needed sleep, the next day was all about a much-needed spa visit and haircut.  Realizing that I live in Africa, I’m trying to wean myself off my usual highlighting routine, even though my hair is baby-fine and could use the volume boost.  Just a cut, please — the first one in about six months.  Seb spent the morning touring the nearby shopping malls and getting poolside just in time for the daily rain, then met me at the same food court, this time to try peking duck.  Once we sat down, we realized the duck would be way too much food for the two of us.  So, feeling brave & confident after all mystery dishes so far have turned out to be delicious, I ordered yet another fish dish unfamiliar to me — cuttlefish.  Yuck.  I like squid generally, but this was a dried, very stinky, maybe partially fermented version.

The best part about our trip to Singapore was wandering around Little India and Chinatown.  We never made it to Orchard Road, the shopping mecca, which I hear is nice.  I was hoping to visit Little India on Sunday, the day we arrived, but there just wasn’t enough time (or energy).  Lonely Planet says it gets “very bolly” on Sundays, the one day per week many immigrant workers are free to socialize.  Walking around took me right back to India.  The street vendors, the sounds & smells… so exciting and different, so exotic.  I keep telling Seb I’m going to take him there one day.  He doesn’t seem interested.

Ah, Singapore, known for its racial and religious harmony! 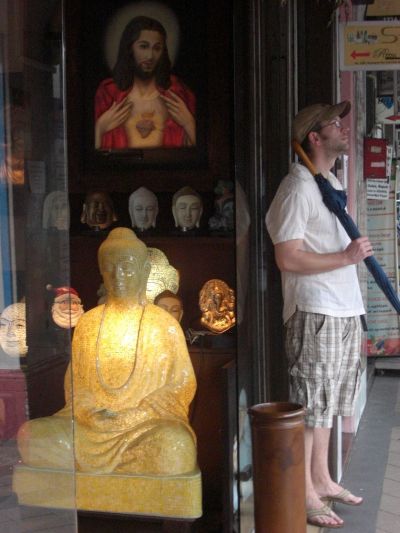 Shopping in Chinatown and a bite to eat at a cute little place, the Singapore Heritage Restaurant. 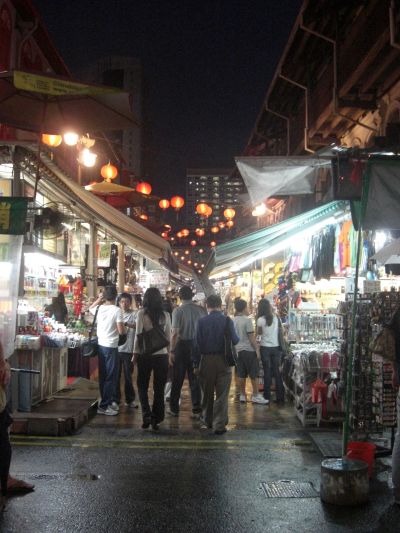 Of course we had to check out Singapore’s first locally brewed beer. 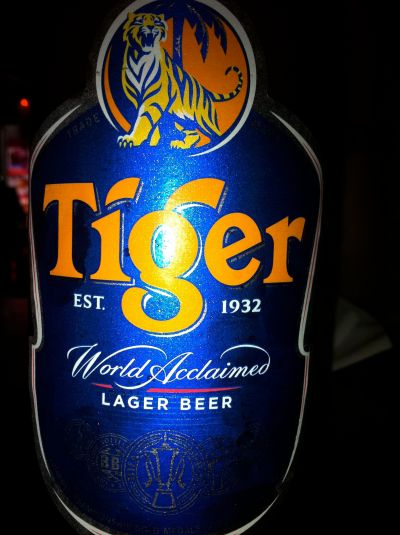 At a kiosk inside one of the malls, we had a chance to sample durian.  Durian is a notoriously stinky fruit in Southeast Asia.  Apparently it’s so stinky, it’s outlawed from many public places.  Some say it smells like poo.  So, of course we’ve been on the lookout for it!  Here, we’re cheating a little bit.  This is chilled durian fruit in a crepe.  The smell wasn’t strong because it was chilled, and the taste wasn’t too bad — kind of oniony — though I have to admit, I didn’t really want to finish it. 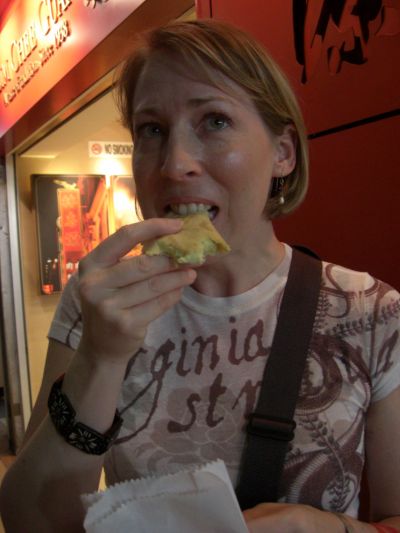 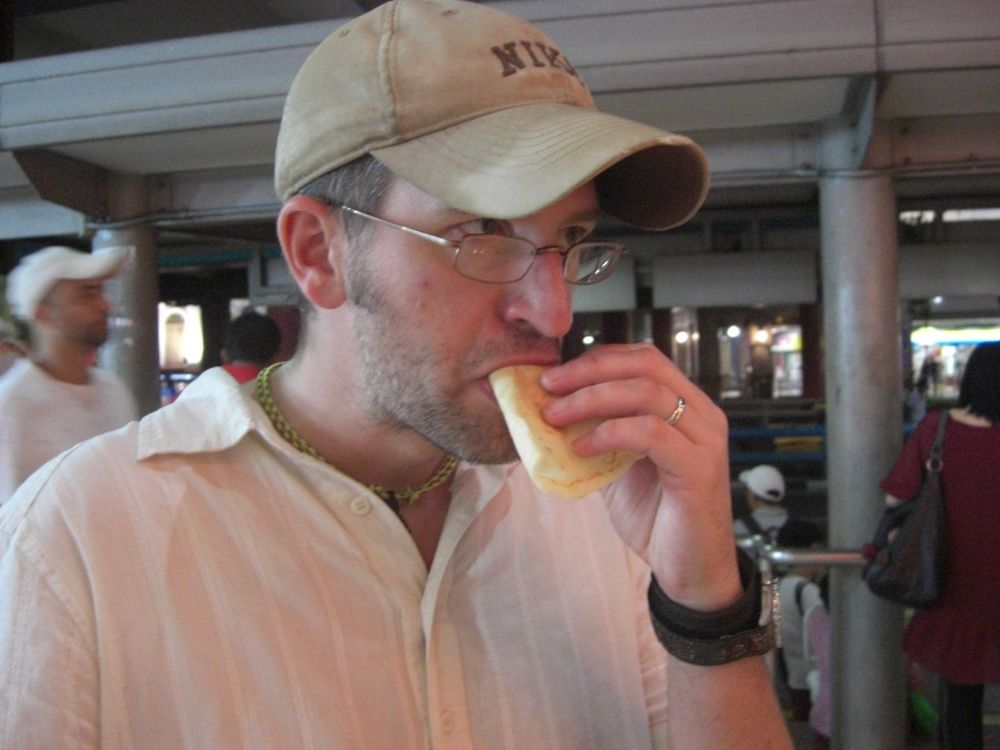 Overall, we found Singapore… boring.  I had such high expectations; maybe they were impossible to meet.  Most likely, it’s because we had only two days to explore.  On the first, we were stone tired.  On the second, we had too many personal errands scheduled.  We weren’t yet relaxed and enjoying ourselves.  And when I see a city, I have this craving to completely cover it by foot.  I love city-walking.  My rock-climbing, tree-splitting, tundra-camping geologist husband does not.  As a result, neither one of us was fully satisfied by our time in Singapore.  But no worries — there are many places ahead to look forward to!

Featured photo at top: A Hindu temple in Chinatown