I must have gotten a little spoiled taking all those photos at International Women’s Day last week. Only 8 days later and I’m running from the law because of my damn camera.

Actually I don’t know if the man who stopped to yell and chase us ladies down was “the law,” but he sure thought he was.

Here’s what happened. Three of us girls decided it was a beautiful day and we wanted to take a little hike outside the gates. They let us go out last week and march all over town, right?? This ought to be fine.

We did our duty and checked in with security first, and they said sure, go ahead. Just as we were about to leave through a side gate, which opens onto the national highway, we saw a cattle drive coming down the road. This happens only a few times a year! We squealed with delight at our good timing, stuck our cameras out through the chicken-wire fencing and started snapping away. 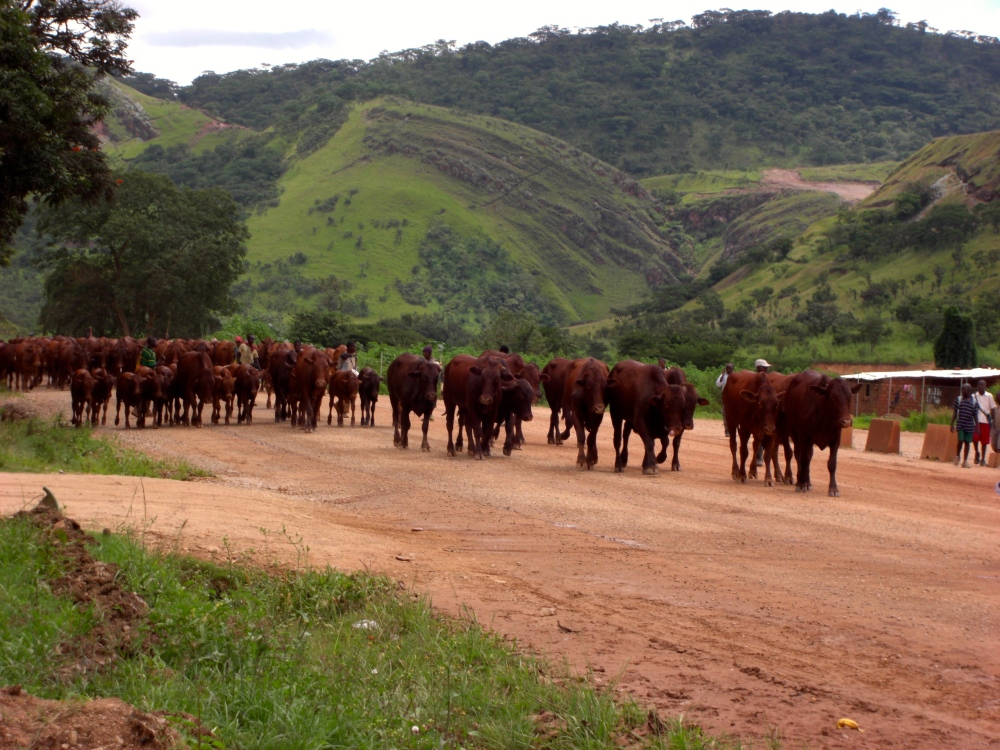 Not only did we have an unobstructed view of the cows and their herders coming straight for us, but we also had a clear shot of our beautiful Green Wall in the background, the very place we were heading! The Green Wall is a favorite sundowner spot for us expats, and an important one because very shortly it will be gone. It’s named the Green Wall because it’s rich with malachite. It also happens to be covered in a blanket of green grass and shrub at the moment because it’s the middle of rainy season.

After the cows march on by, we exit through the gate and begin walking along the highway. (Yes, the dirt road that you see in the photos is the national highway.) We don’t have far to go before we will cross and take a little path that diverts us off this busy road. But what should pull up and park right in front of us at that very moment? One of those incredibly super-loaded mattress trucks that I see all the time here, and always wish I could photograph! This truck’s right in front of us, AND has the Green Wall right behind him. Serendipity!!

It was seconds after nabbing this photo that somebody whizzes past us in a car, yelling through the window. His car pulls over, he gets out, yelling. He starts walking quickly towards us, still yelling. “Abort! Abort mission!” us girls whisper to each other as we do an about-face and start heading back for the gate we had exited moments earlier. We’re also trying to look calm and not like we’re purposely evading this dude, who’s gaining on us, and I’m the closest to him. When it’s obvious I can no longer pretend he’s not there repeatedly yelling “Madam!” at me, I turn around as calmly as I can and innocently say, “Yes?” He hollers something in French and points to my camera. (At this point in 2011 I can speak only a few words of French. And I use this to my advantage.) I look confused, shaking my head, pointing to the Green Wall and saying, “No?” He shakes his head no and continues to rattle off some more choice words which I don’t understand. I soften my eyes, look directly in his and say, “Oh, I’m so sorry. Ok, no more.” He’s thrown for just a second. I see a flicker of sympathy and forgiveness flash across his face. But at this point the other ladies have come back for me and now he’s got more grandstanding to do. He continues with his show.

Meanwhile, there’s a contingent of company security forces heading our way. They don’t speak much English, but one of the ladies in our group can do quite well in French, and she explains to them that we were simply photographing our Green Wall. Which is our property, and located on our concession. It’s not our fault there’s a national highway running across our concession. It’s not like we’re photographing a police station or an airport or something.

The security guys meet with Angry Man while us ladies slip back through the gate. We know it’s possible he’ll demand our cameras and we want to be on the other side of the fence if that happens. What can he do, run after us? No, we’re in the safe zone here. Tag, you’re it. No tag backs.

It takes 15 minutes to placate him. Eventually, there are a few chuckles among the men, some shaking of hands, and then he leaves. When we’re sure his car is long gone, we actually resume our mission. In retrospect it’s remarkable that we wanted to continue, and that security let us. But I guess we were full of adrenaline and didn’t want some overly zealous self-appointed policeman who didn’t get the memo that cameras are ok to stop us.

So we went, cameras hidden away until we were safely up on top of the Green Wall.

Fungurume hills, our base camp in lower left. And the national highway. Nanny nanny boo boo.

Not much digging needed here to discover malachite.

Exploration and security roads, often traversed by artisanal miners too.

Wish I’d had more than a snapshot camera for these beautiful views.

Daily rainstorm rolling in, work goes on as usual.

Technically, this last shot is still the national highway. But it’s inside our concession, with gates on either end. Random self-appointed policemen shouldn’t be able to enter without a company pass. But still, I made sure no one was around when I took this photo, another one of the quintessential views of this country: a beautiful Congolese woman, surrounded by green jungle and dark rain-filled skies, carrying something to market on her head. Amazing.

The only thing not so Congo-like about this photo is the power lines. Those are thanks to us and the mine here. We’ve invested in the infrastructure of Congo in a big way: installing new turbines at the national power plant, putting roads and power lines everywhere, 7000 jobs, rising incomes, schools and hospitals and wells all over the place. You’re welcome, Angry Man.