You would think living in the heart of Africa we would get to see lions, zebras, and hippos on a regular basis. Nope. Congo has been without any large animals for a few decades now. Apparently war, poverty, and hunger can do that to a place. A farmer who lives nearby told us that once upon a time elephants and giraffes roamed his property. The last time he saw anything like that was in the 1980s.

So apart from the Lubumbashi Zoo (which was, surprisingly, a fun little trip), we have to leave the country to go on a proper safari. We chose South Africa as the first recipient of our tourism dollars on this continent, cleverly timed to celebrate our first wedding anniversary.

South Africa was an easy choice. It’s well-developed, beautiful, English-speaking, easy to travel around. We knew all those things in advance yet were blown away by each of them. The roads in the Western Cape were utterly perfect, even in bad weather. The scenery a cross between New Zealand and British Columbia. The wildlife prolific. Everywhere we went we found incredibly nice people, impeccable service, and crazy-good food. There’s a real spirit of optimism, a refreshingly open press and other signs of progress, a lot to be proud of.

But on the flip side, we had many concerns about the country’s crime record. We’ve long heard that Johannesburg is one of the world’s most dangerous cities, the kind of place where you’re advised NOT to stop at red lights. Carjackings, muggings and home invasions are extremely common, and they tend to be violent. Joburg General holds the world record for the most bullet and stab wounds; the country suffers from 50 murders per day and the highest rate of rape in the world. When I visited during grad school we heard the same story from all the expats on the panel: living here is tough, especially with a family. You spend your life behind security gates and can’t really go anywhere at night.

Suffice it to say that planning this trip did not come without some heated debates and, in the end, some “do not cross” lines, such as renting a car at all in Johannesburg, hiking Table Mountain, nor going out at night in the cities.

So it is with these mixed feelings that we set out for the rainbow nation, giving ourselves 16 days to explore a country twice the size of Texas. We started by flying to George and spending 3 days with a lovely friend on the southern coast in Knysna; then we took a scenic drive along the Garden Route (interrupted briefly by a completely unnecessary yellow fever shot) to spend 3 days in wine country at the beautiful French settlement of Franschhoek; followed by another scenic drive through penguin and whale territory to reach Cape Town where we stayed for 3 days; then we flew to Nelspruit and drove ourselves to Kruger National Park (or just outside it, actually, at the ultra-posh Sabi Sand Private Reserve) for a 3-day mind-blowing safari; ending with a visit to the forested highveld near the Panorama Route for – you guessed it – 3 days. Plus another night in Joburg to catch the flight home, if you’re keeping track. And without the rental car, thank you. 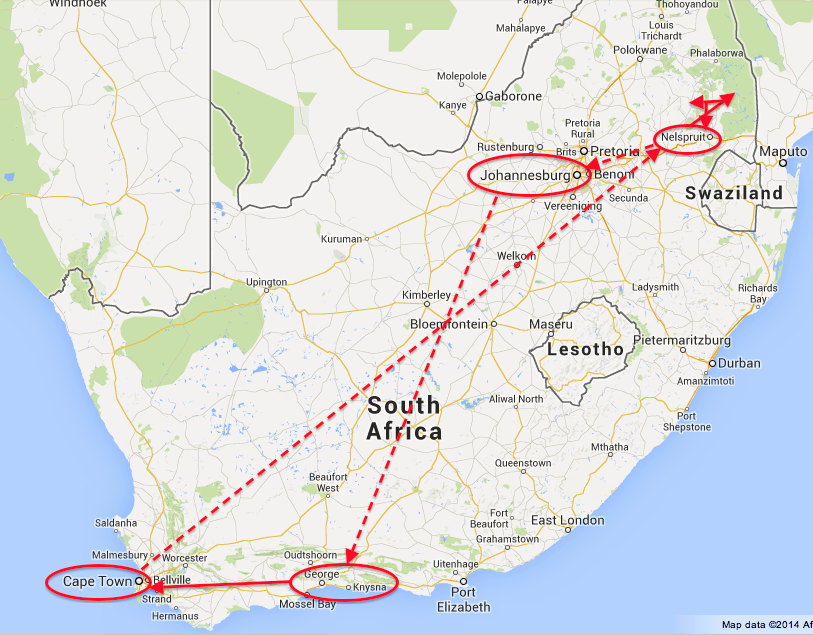 Keep reading (use the right-arrow at the bottom of this article, or click on one of the links below) for a more in-depth look at each of our destinations. (By the way, my mom recently sent me a lovely cookbook called “The Homemade Pantry,” whose clever chapter titles must have been my inspiration here…):

Spoiler alert: In the end, we experienced zero safety problems and made fantastic memories, and the same goes for everyone else we know who has vacationed in South Africa. A truly beautiful place.