I love birthdays. It’s probably no coincidence that we’ve timed a couple of pretty fantastic vacations to coincide with late February. (And with a use-it-or-lose-it travel kitty as one of our expat benefits, why not?) I turned 40 on a mystical candlelit rooftop in Zanzibar, and 41 on reindeer pelt-covered blocks of ice in northern Sweden. This year we took a long weekend in Johannesburg for shopping and eating out and remembering what it’s like to live a civilized life. Seb likes birthdays as much as I do — his April travel gifts have included sandy beaches in Seychelles and Réunion, and this year we’ll be kicking off a 6-day trek through the Drakensburg-Lesotho mountains as he turns another year older.

But just as memorable as those exotic trips was our “staycation” in 2011, my first birthday here in the Congo. We had been here for six months, less one for the holidays, and had no plans to go anywhere in February. We decided to take a long weekend in Lubumbashi to check the place out. “Only the best for you!” Seb joked.

Actually, I loved it. A very memorable and fun birthday weekend. The fact that it’s taken me four years to write about it may seem contradictory, but I didn’t write much of anything in 2011 thanks to our lack of internet.

With a population of around 1.5 million, Lubumbashi is the second-largest city in the country, after Kinshasa. (By the way, I just learned that Kinshasa is the second-largest French-speaking city in the world, after Paris. Doesn’t that sound like a good reason to go?? I hope to, someday.) To get to Lubumbashi from our place requires a 3-hour bumpy voyage by car or a 20-minute flight by charter plane. By this point in February 2011, I had flown there once or twice for quick shopping trips with the ladies, and was still rather befuddled by all the strange products labeled in French or Dutch or sometimes even Arabic. (Yes, we used to go grocery shopping by plane! Something I haven’t yet written about but intend to.)

Although Seb and I took the road both directions this time—an adventure in itself—it felt so luxurious to be in the big city for a whole weekend, enjoying the shops at a slower pace, the restaurants, and the sights. Lubumbashi is fantastically well-equipped compared to our little village of Fungurume!

Downtown Lubumbashi with its wide boulevards and old colonial architecture. 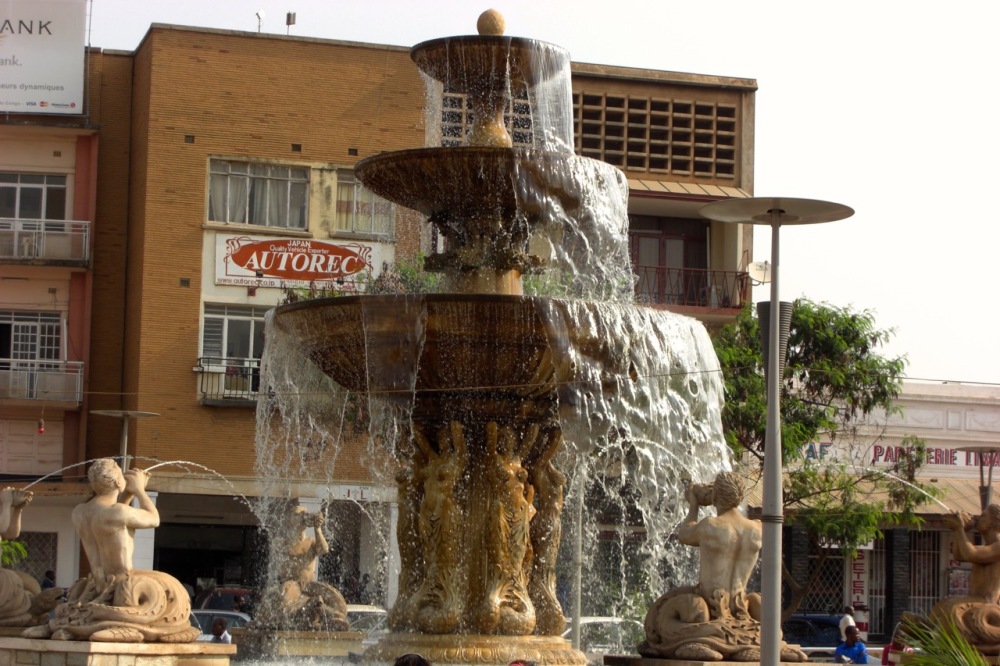 A typical jacaranda-lined residential street near the city center. 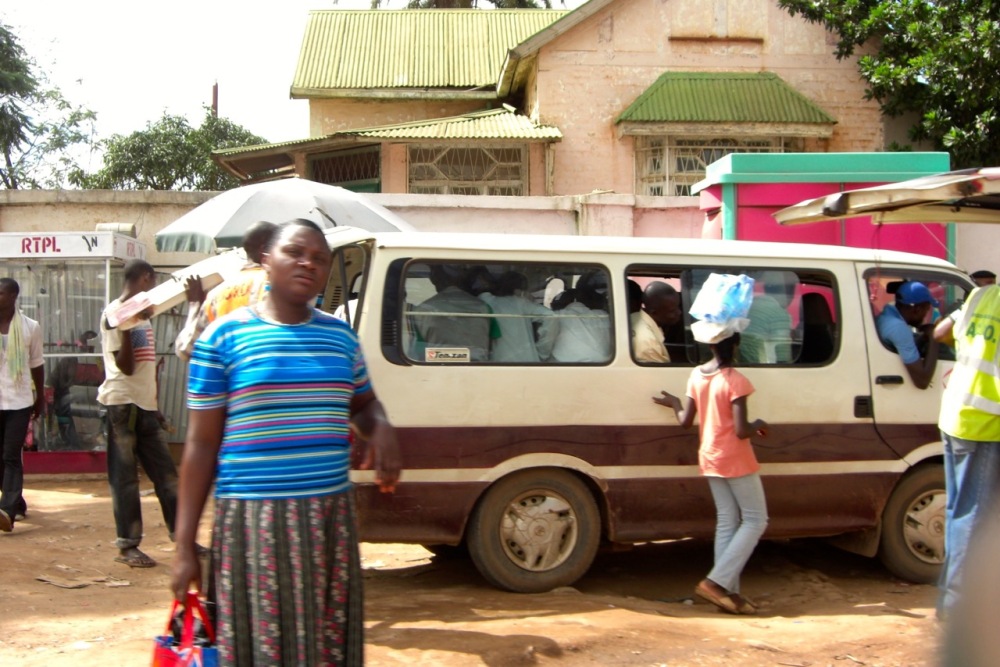 Catching a minibus taxi — never a seat to spare.

But always another seat to be found.

“Mount Lubumbashi”—the slag pile from an old copper smelter—with the horse-riding grounds of the Equestrian Club in front.

One of our favorite restaurants. Beautiful inside and out, great food, clever name. (Bum from Lu-bum-bashi.)

Seb getting a trim.

Besides the shopping and eating out, both a total treat, Lubumbashi held two surprising highlights for me. First, we met up with a group of Seb’s weekend-commuting employees and their spouses who wanted to introduce us to a local snack called michopo, or grilled goat. We had no idea what to expect, but the place turned out to be one of our lasting favorites, a place we’ve returned to again and again.

Without their introduction, it’s the type of place we would have never found on our own, much less had the courage to try. It requires a little inside knowledge. First, you must enter through a car wash and wander through the parking lot to find a bunch of plastic picnic tables set on a grassy lawn beside the lake. Find your own spot, and eventually someone will come over to take your drink order. If you want food, you must make your way to the little butchering kiosk and place your order from the fella holding the machete. There’s only the one thing on the menu—goat—but to get some you’ll need to choose your preferred cut of meat from the bloody fly-covered pieces sitting on the countertop.

Sounds disgusting, I know. And it kind of is. Until you taste it.

The goat meat you choose will be hacked in front of you into bite-size chunks, then grilled with some onions and basted with a melting hunk of fat until practically blackened. Then it will be served with toothpicks on recycled printer paper along with some powdered MSG and hot chili flakes. And then, you will wish you’d ordered more, because it’s absolutely delicious, I’m not kidding.

For a more complete meal, which I highly advise against, you can also order bucari, a popular starchy staple made of corn flour and manioc flour. It’s not the bucari itself that’s bad, but the serving method. Hands that have just handled goats both living and dead and stinky cash and lord knows what else will also handle this dumpling before serving it to you. It’s the one and only time I’ve ever spit something out of my mouth there.

Just last week a Congolese friend came over for dinner and I mentioned how much we like this little place when visiting Lubumbashi. She had never been, despite owning a home in the city. She’s rumored to be an actual princess of some kind (though I have not verified this information with her), and let’s just say princesses don’t go to this kind of place. But she’d heard of it and asked me with some concern, “Mais, est-ce que c’est propre??” (But is it clean??) I paused for half a second before answering her perhaps too matter-of-factly: “Non!” which made her burst into laughter. “Mais c’est bien cuit!” (But it’s well-cooked!)

Grilling and basting (see the featured photo at top for the finished product). 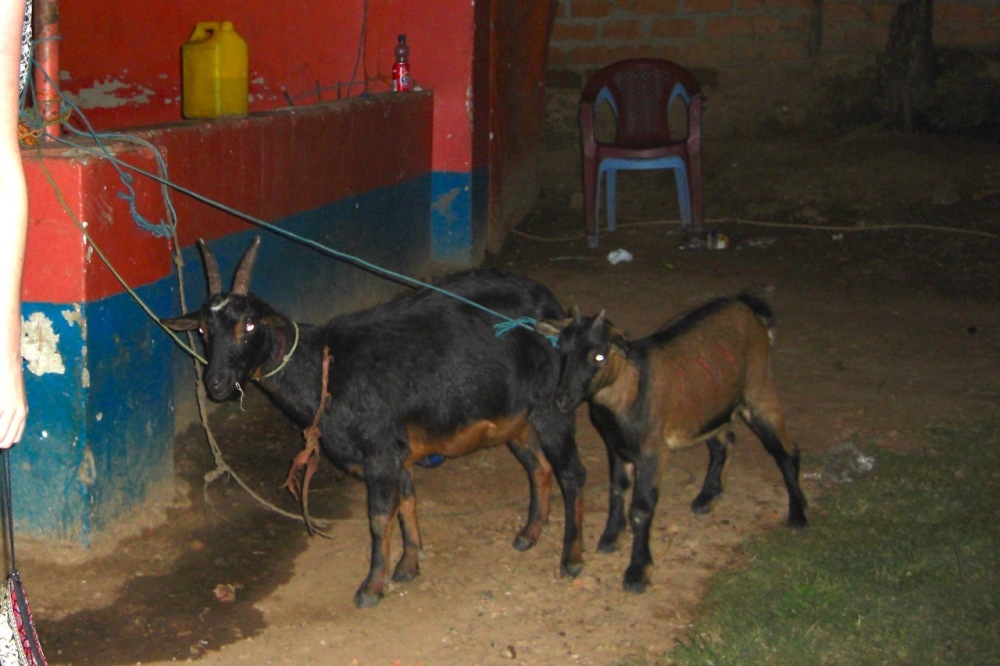 Posing with machete man on my third visit (May 2012)—he proudly kept things very clean. 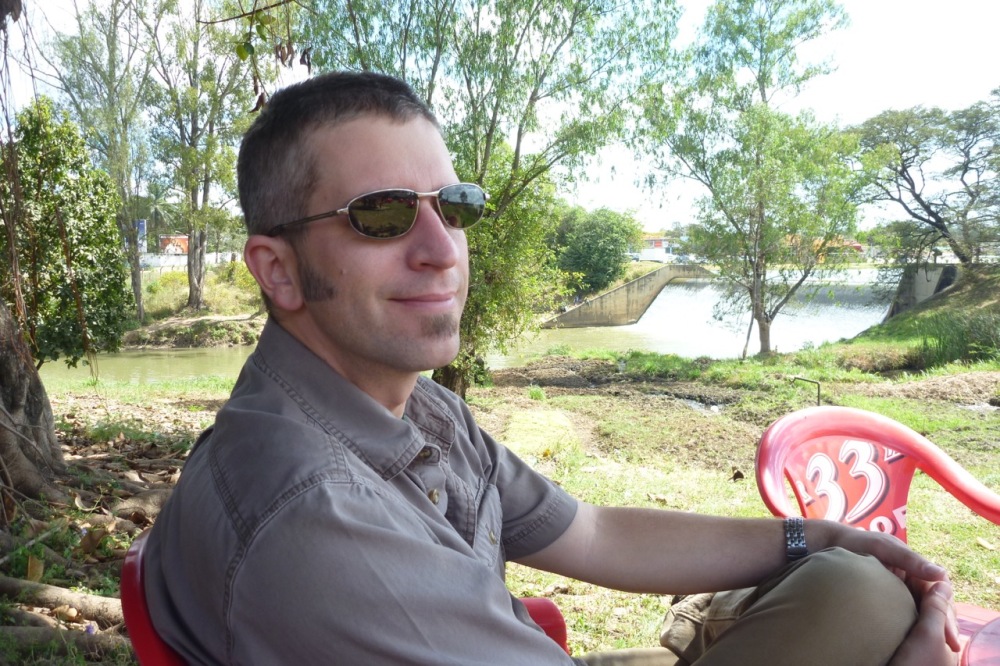 Enjoying a quiet spot next to the dam on yet another repeat visit.

The second highlight—and total surprise—was our visit to the Lubumbashi Zoo. Most of the shops and museums were closed on Sunday and we needed something to do for a few hours. We didn’t have high hopes for what we’d heard was a place long past its prime. And besides, this is Africa, land of safaris and game drives. What the heck should we expect to find at a caged-up, artificial zoo anyway??

“Are there any zoos in Africa? If there are, they must be filled with animals we think are normal. Dogs, cats, rabbits, deer, and groundhogs.” – Tosh.0

Turns out they DID have all those things—ha!—but the more exotic versions, like wild dogs, wild cats, a variety of beautiful antelopes, and yes, your basic rabbits, mice, and guinea pigs. They also had the usual zoo suspects like lions and tigers, no bears but lots and lots of monkeys, AND with the added thrill of having very few barriers to keep people and animals safely apart. We could have easily tripped or fallen into the crocodile pit, been pecked in the eyes by an ostrich, or seriously injured ourselves on exposed barbed wire. (Parents with children, take note.)

Our favorite part of the zoo was interacting with the monkeys. And I mean “interacting” quite literally. Each new “friend” we met made us nervous at first, but they were all very sweet and gentle. 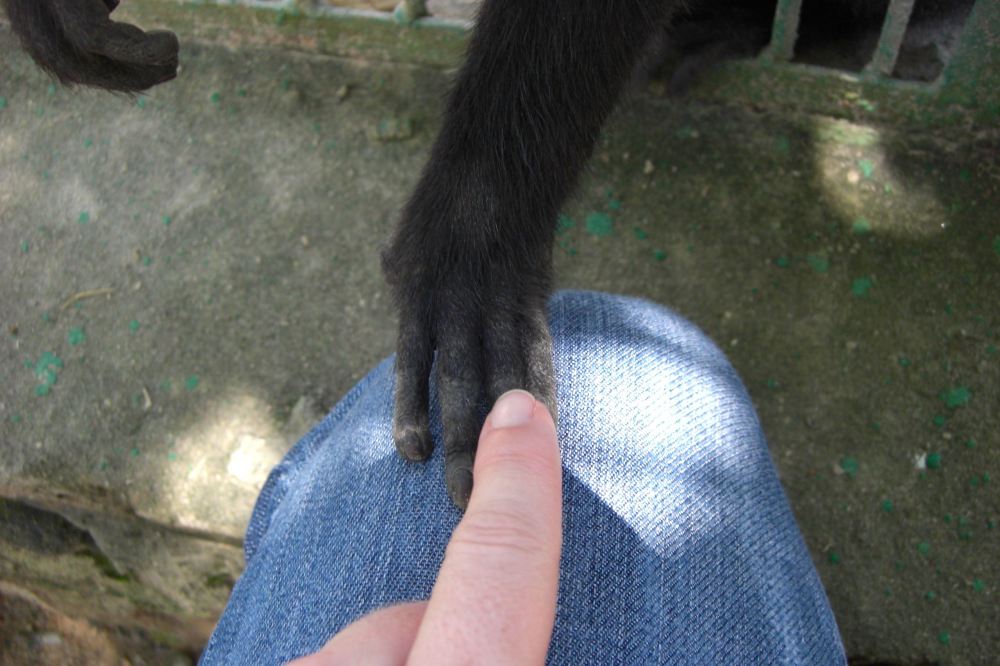 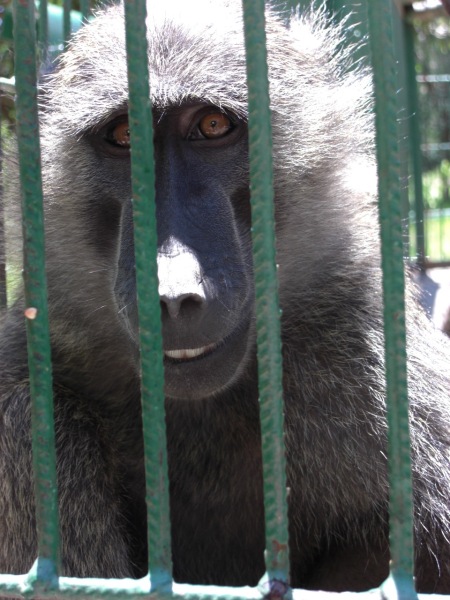 We even found much skinnier specimens of our very own Lucy. I don’t think the monkeys were underfed since they seemed quite active, it’s just that Lucy eats like a little piggy. She also has a shorter tail than she’s supposed to, due to a previous “injury.” (The story goes she was rescued, and by that I mean purchased, from bush-meat traders who had mistreated her.)

By far the best friend we made was this sweet chimp. He wanted to play and roll on his back, hold our hands and be scratched. He stayed right next to us and looked very sad when we walked away. We came back to him a couple times and wanted to bust him out of the place. 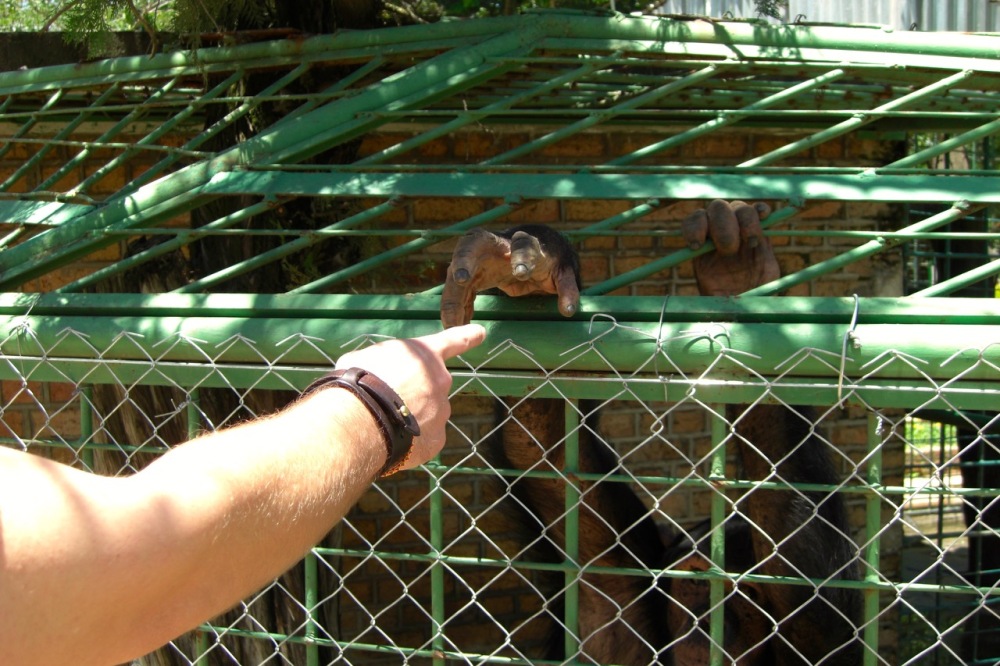 It sometimes seems cruel, you know, the general idea of a zoo and keeping innocent animals locked up in small cages. But most of them, in this zoo anyway, have been rescued and rehabilitated from near death. (The zoo’s website tells quite a few harrowing stories.) While we were hanging out with our friend Mr. Chimp, an attendant came by and offered to show us the chimp rehabilitation center, a huge playground with dozens of boisterous chimps, tucked away down a junglelike path and well separated from people. These guys had all been confiscated from illegal traffickers. 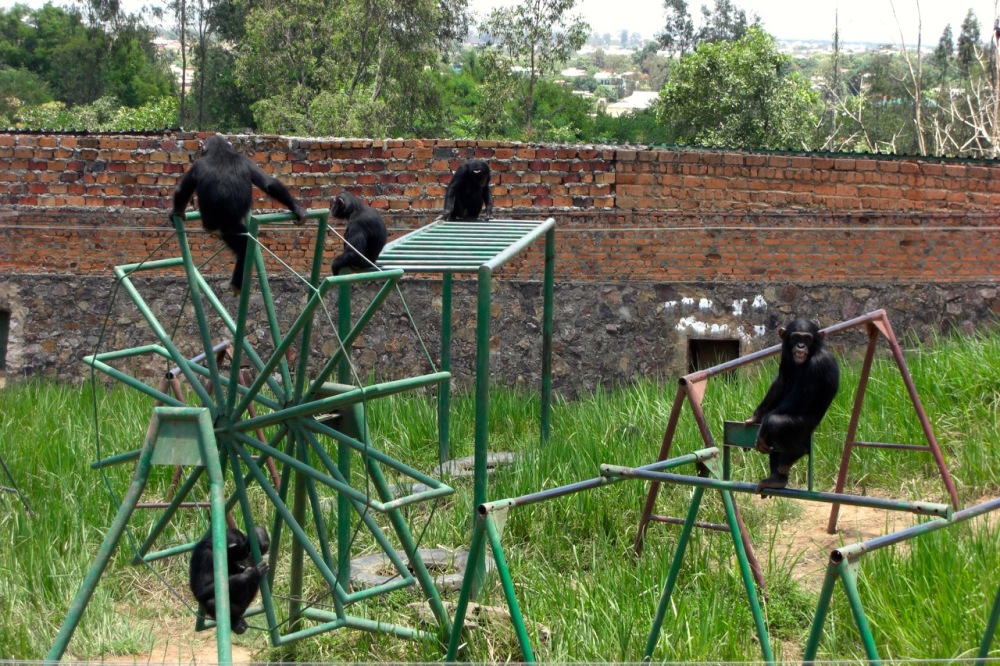 There are 5 chimps climbing the tree way in the back!

Our visit to the zoo was touching (literally!), and a pleasant discovery. We weren’t even able to cover it all, and thought it would be nice to revisit someday. All in all, a fantastic birthday weekend, and we didn’t even have to go very far. One for the books!