Will Smith remarked on his first visit to Africa: “It feels like God visits everywhere else but lives in Africa.” I don’t know if he was specifically referring to South Africa when he said that, but if he was, then I think we stumbled upon God’s hometown. It’s in Mpumalanga province, specifically along the Drakensberg Escarpment, where the highveld is separated from the lowveld.

Mpumalanga means “the place where the sun rises” in four of South Africa’s indigenous languages—Swazi, Xhosa, Ndebele and Zulu. We had chosen to explore this area following our nearby safari because it’s full of natural wonders with beguiling names like The Pinnacle, God’s Window, Bourke’s Luck Potholes, and the Blyde River Canyon. We spent a day exploring the area, along what they call “the Panorama Route.”

The Pinnacle, a 30m tower of quartzite

God’s Window, 900m above the lowveld — that’s Kruger off in the distance

a nature walk at God’s Window 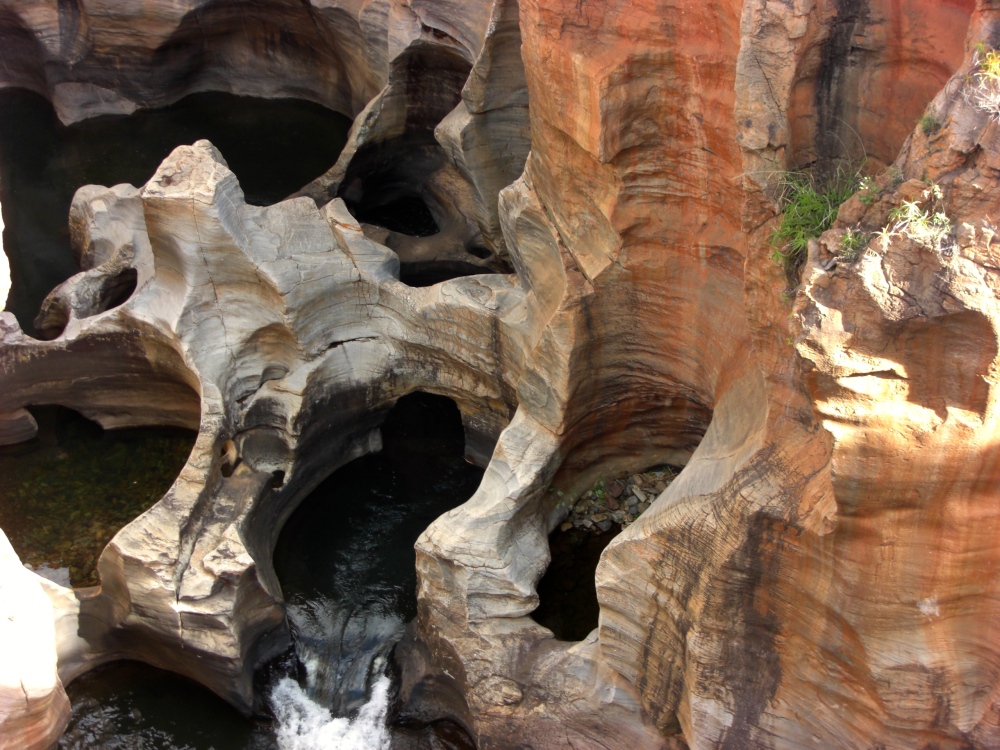 Bourke’s Luck Potholes, created by swirling rocks at the confluence of two rivers

a walkway over one of the rivers

the Lowveld View — very scenic, and free of charge 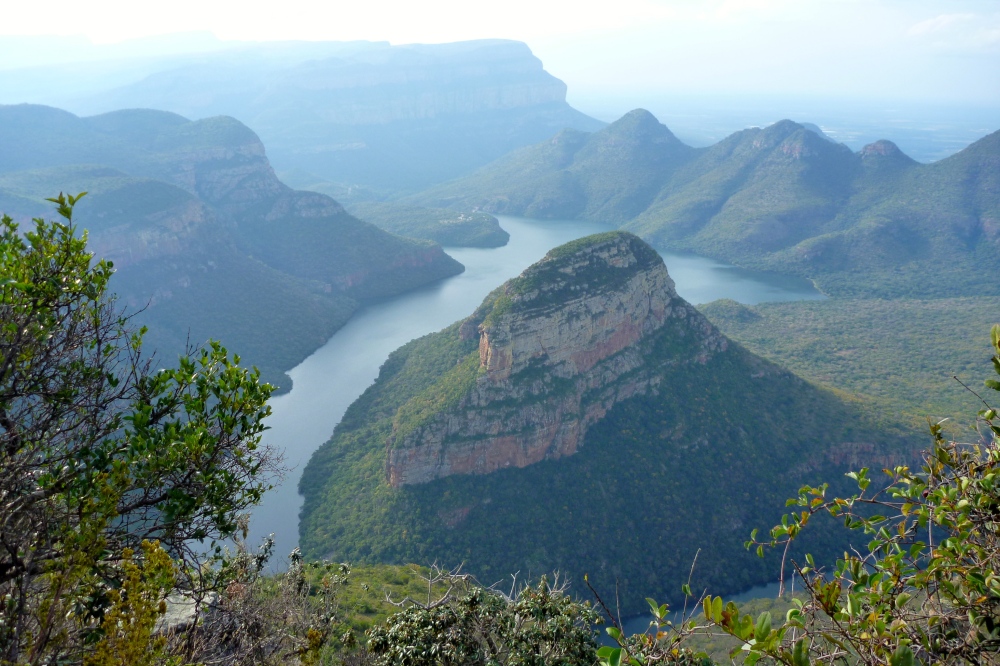 looking northwest from The Three Rondawels

Those last three photos overlook Blyde River Canyon, the third largest canyon in the world (after the Grand Canyon and Fish River Canyon in Namibia), and the largest “green” one.

We should have spent much more time exploring this area. Each stop had nature trails that we could have explored further, and there were many, many more stops than we had time for. Lots of waterfalls, hiking trails, horseback rides, golfing, fishing, etc.

The problem was that our lodging wasn’t conveniently located to the Panorama Route, at least not as much as we’d hoped. We stayed at Cybele Forest Lodge, as advised by my favorite travel book, but were disappointed on several fronts. It was very scenic, beautifully forested—but took time to travel. And we hated the washboard dirt road going in and out of the place. A small rental car is definitely not advisable.

They also had a few service problems, specifically at the spa. In fact I’m biting my tongue not telling you what I really think of them. But what they did do excellently… was food! All their meals were quite delicious. The day we explored the Panorama Route, they sent a “picnic basket for two” with us. The menu included an entire roast chicken, slices of rare beef fillet and lean ham, chicken liver pâté, smoked trout pâté, biltong (South Africa’s answer to beef jerky)… and those were just the meats. There was also quiche, a cheese board, olives, vichyssoise soup, salad, fruit, bread, dessert. Criminy. 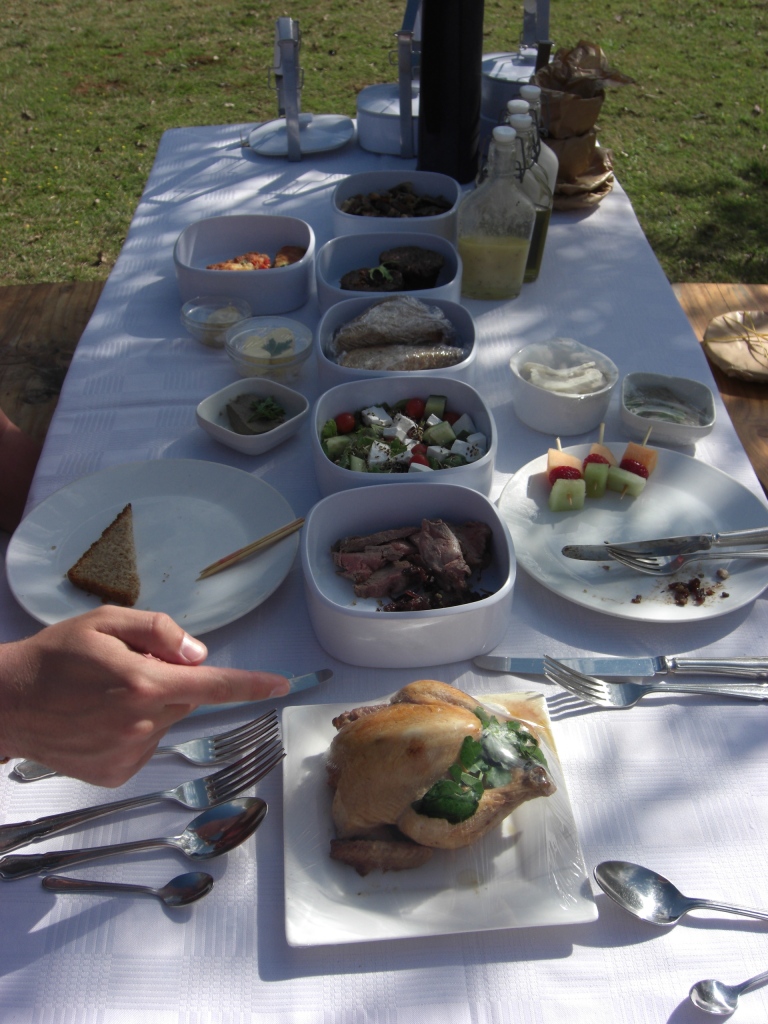 The next day we stayed in for a couple’s massage, part of the “Romantic Package” we had booked, since we’re celebrating our anniversary here. In the afternoon we took a long walk on the lodge’s nature trail, still snacking on the “picnic” spoils from yesterday. That night we had a wonderful dinner in our cottage, then snuck off to the lounge while someone “romanticized” our room (another part of the package). We came back to a candle-lit cottage, a fire going in the fireplace, rose petals everywhere, a bottle of champagne chilling, Barry White playing on the stereo…

Wait, what? (How do you spell the sound of a needle scratching to a halt on a turntable? Insert that sound here.) It seemed so nice and romantic until I mentioned Barry White! (Sorry, but the guy makes me laugh. I guess it’s all those episodes of Ally McBeal that ruined his music for me.)

Scenes from the nature trail, and around the lodge: 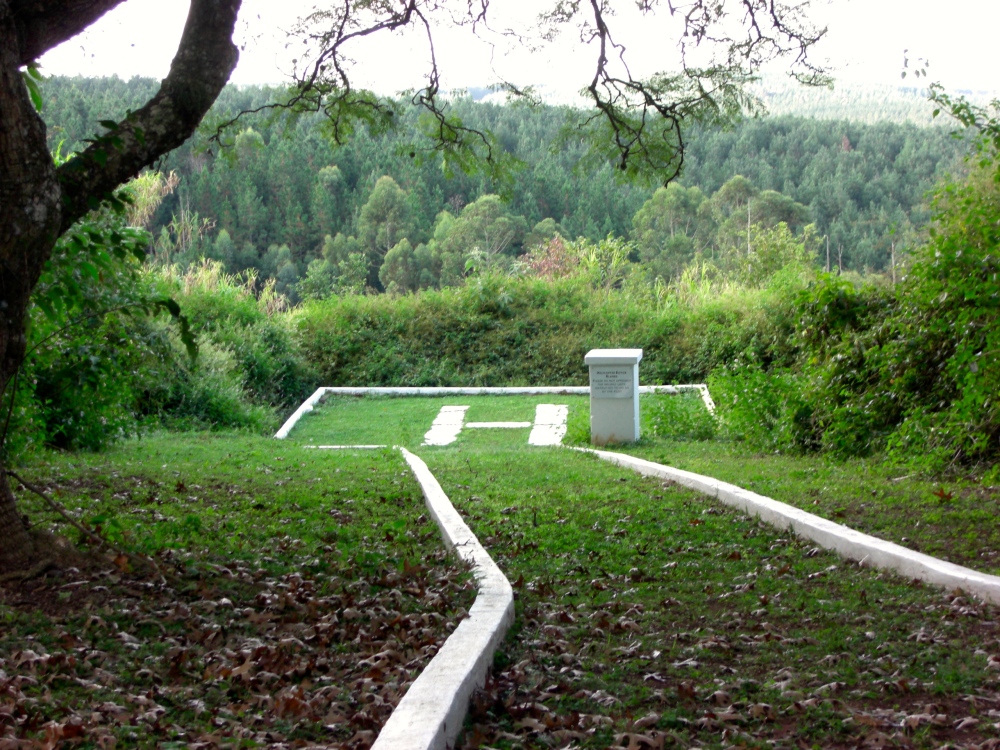 the kind of place that has a helipad sometimes, unfortunately, does mean snooty service

a dyke… apparently it means something to geologists

the bar/lounge at Cybele 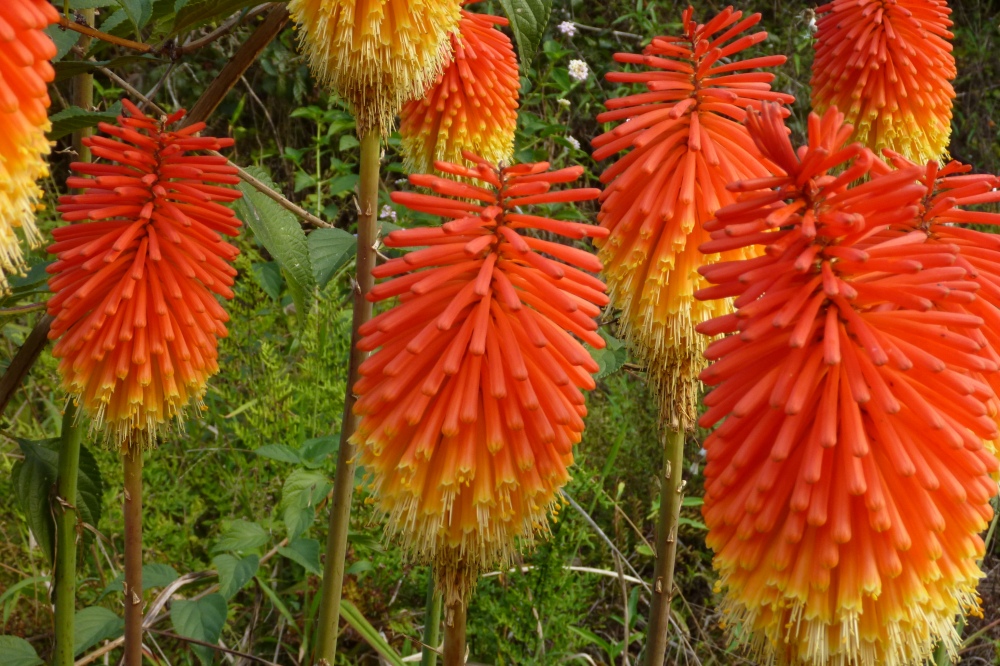 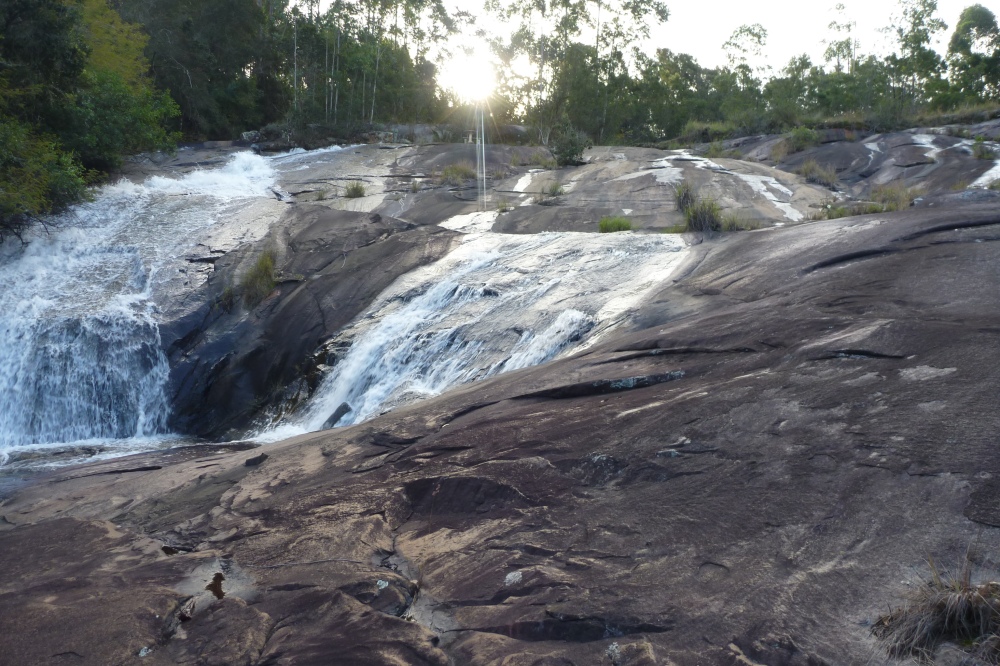 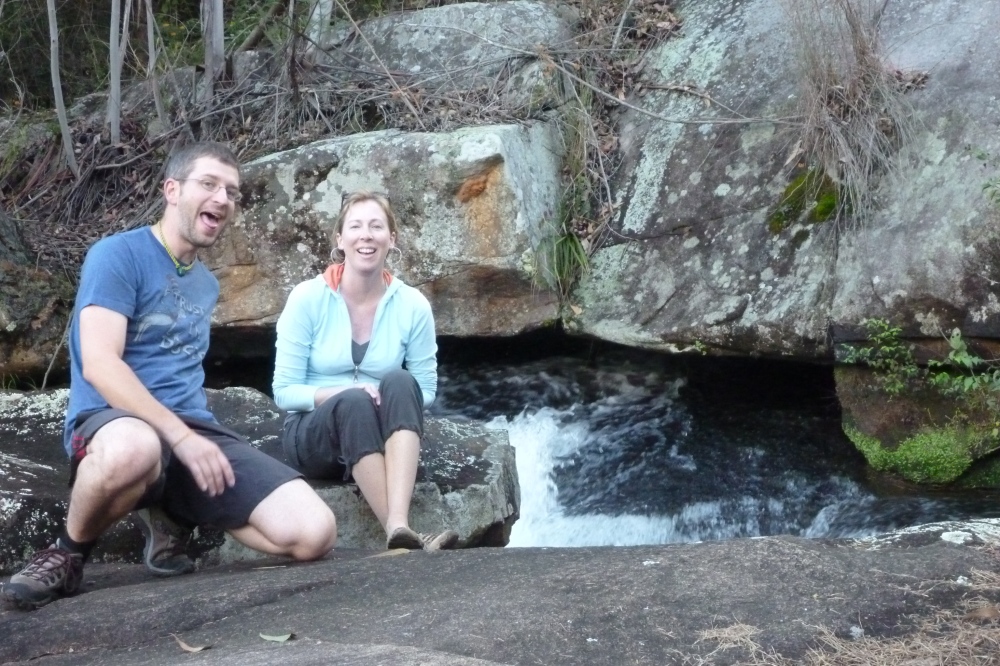 self-portrait at the waterfall 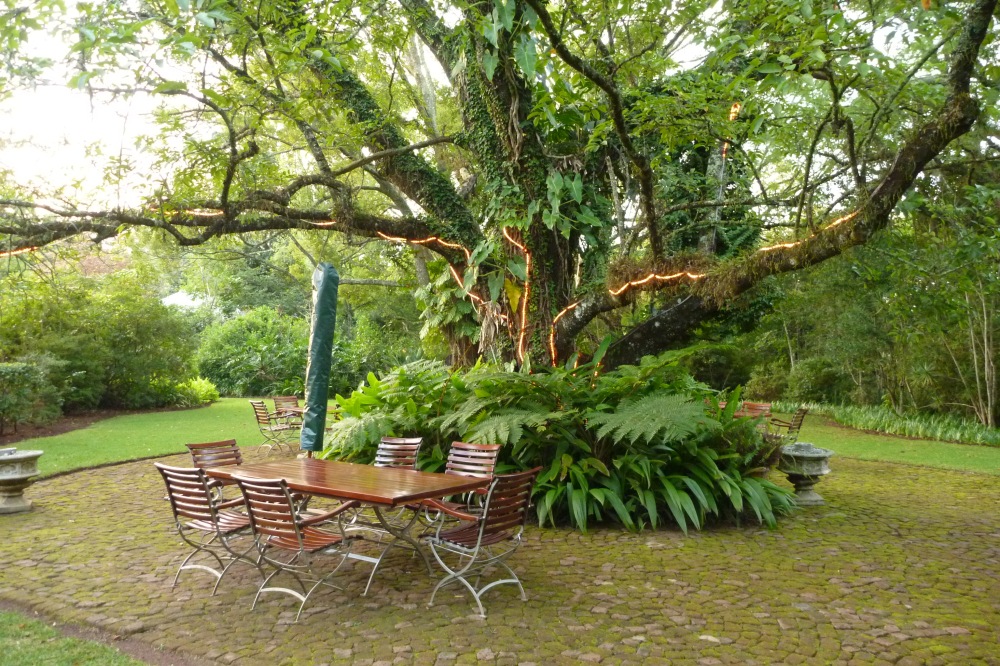 a band of mongooses

On our last day, heading back to the airport at Nelspruit, we had enough time to take a tour of Sudwala Caves, the oldest known caves in the world. According to Wikipedia (and confirmed by the geologist in our house), the caves are set in Precambrian dolomite rock, first laid down about 3800 million years ago when Africa was still part of Gondwana. The caves were used as shelter in prehistoric times, as there is a constant supply of fresh air from some unknown source. Strange. In more recent times, they have also been used as a concert hall. It was a pretty cool place, even for a non-geologist. There are much prettier photos online, but just to give you a feel for the place, here’s a few of ours. 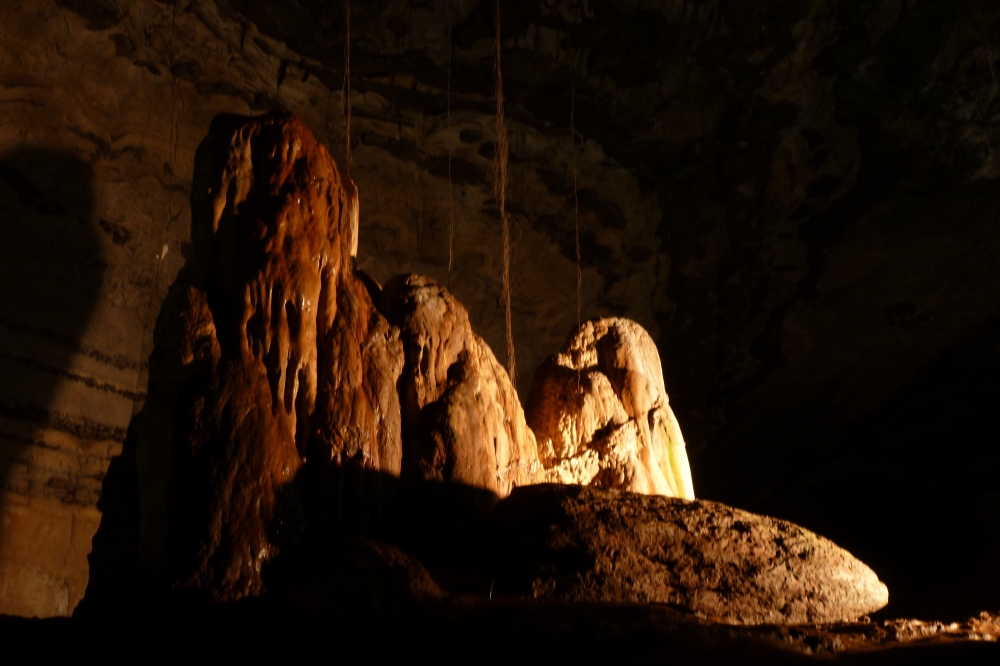 After this trip, we have absolutely fallen in love with South Africa. It’s so diverse, so surprising, so picturesque. We are slightly sad as we drive back to Nelspruit to board the plane to Johannesburg. We’ll have another day in the city to do some shopping before we head home to Congo on Monday. We’re always a little bit excited to stay and shop and eat in Johannesburg, despite its reputation for crime and all. One of these days, I’ll get Seb to go on that Soweto township tour with me.

Thanks for following the adventure with us, I hope you enjoyed it!