On July 2, 2011, we were invited to celebrate the anniversary of a local King’s ascension to the throne. There are chiefs everywhere, but not many Kings. This one was special, and we were pretty jazzed to take part in it.

Many, many years ago, before Congo became Belgian, there was a huge kingdom called Yeke, its people called the Bayeke, run by King M’siri. Its capital was Bunkeya, a town very near where we live right now. According to Wikipedia, the kingdom “controlled a huge central-African trading network, mostly dealing in slaves but also in ivory, salt, copper and iron ore. Traders came to Bunkeya from the Zambezi and Congo basins, from Angola, Uganda and Zanzibar. The Arabs from the east coast bought guns and ammunition, which Msiri used to maintain his position.”

Starting in the late 1800s, Bunkeya became quite the little hotbed of international interest. It was visited by many missionaries and European representatives, but King M’siri consistently thwarted all offers of negotiation with colonial interests. Belgium stepped up their game when they heard Britain was taking an interest in the area, sending three separate expeditions to Bunkeya to convince the King to accept Belgian authority. The third one, led by Captain Stairs, a Canadian-born engineer, soldier and mercenary, ended tragically with M’siri’s assassination. Thus began Belgian rule over Bunkeya as well as the province we live in, Katanga.

After cutting off most trade ties to the rest of the world and plunging the Bayeke people into famine and disease, the Belgians made a small concession and recognized one of M’siri’s sons as his official heir to the throne. It wasn’t until the 1940s that the decimated population was allowed to return to their once-lucrative capital, Bunkeya. The population exploded again in the 1970s, and today it remains “their Jerusalem,” a symbolic center of the Bayeke culture. It is this village that we are visiting today, watching the 7th successor of the throne celebrate his 13th year as King, or “Mwami” in the local language. His name is Mwenda Bantu Kaneranera Godefroid Munongo Junior.

A nice guy, as it turns out. But I’m getting ahead of myself. As most of my stories begin… first, we had to get there. Usually the hardest part of any of our excursions, and this was no exception.

The company had organized a bus from base camp to Bunkeya. Not a long distance as the crow flies, but the roads don’t necessarily follow a crow’s direct route. This being July, the height of the dry season, the dirt roads were also incredibly dusty. And bumpy in many places. The miserable drive took about two hours, one way. The highlight was stopping to pick up a local chief from a village nearby who tried to board with his gifts for the Mwami — a live goat and some chickens. The goat was not happy, bleating and protesting his captivity. We began to get nervous about sharing space with him, when a company representative smartly arranged for another vehicle to come along and transport the live gifts separately.

As we approached Bunkeya we noticed a change in the atmosphere. The roads were busier than normal, lined with people who I assume were on their way to the party, bearing gifts and hustling along. The roads were also wider, lined with electric poles — we could see the difference in the development leading up to this important place. The town itself lay behind an attractive hillside, in a wide valley.

We were warmly welcomed upon arrival, and kindness from the Mwami’s family was a gesture repeated all day long. Our company is not an insignificant player — I don’t know the details but we do provide financial support in many ways to Bunkeya — but still I got the impression that any stranger would be welcome here.

It was still early for the festivities, so in the meantime, we took a little tour of the town. 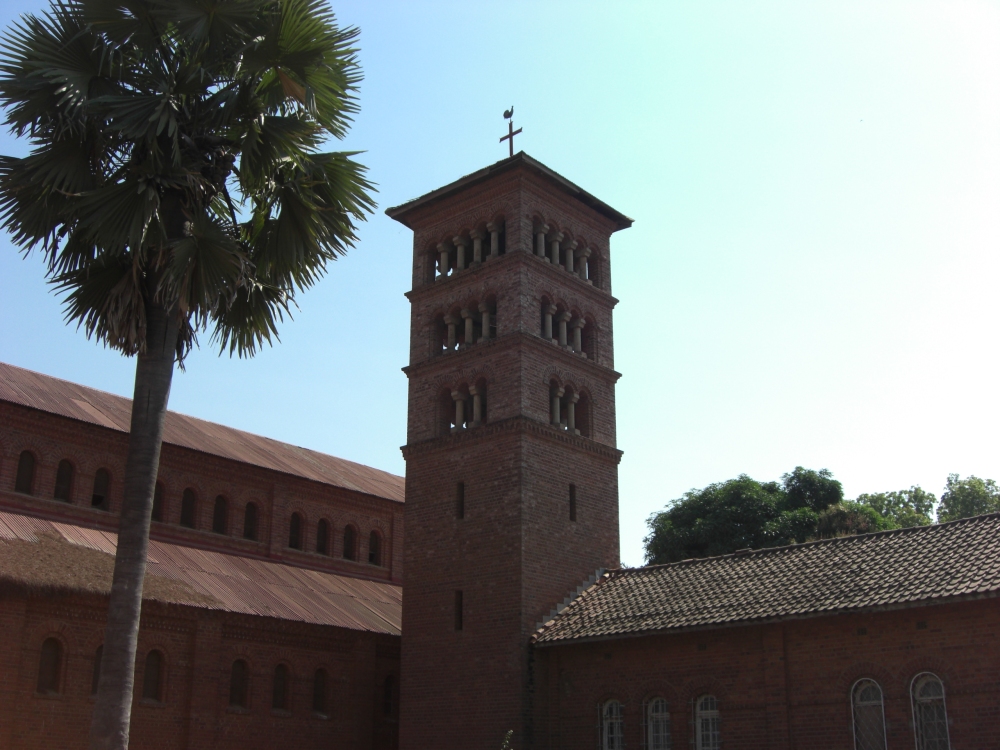 an attractive local church and school

couldn’t have asked for a better group photo!

part of a hospital complex — all in all, in pretty good shape 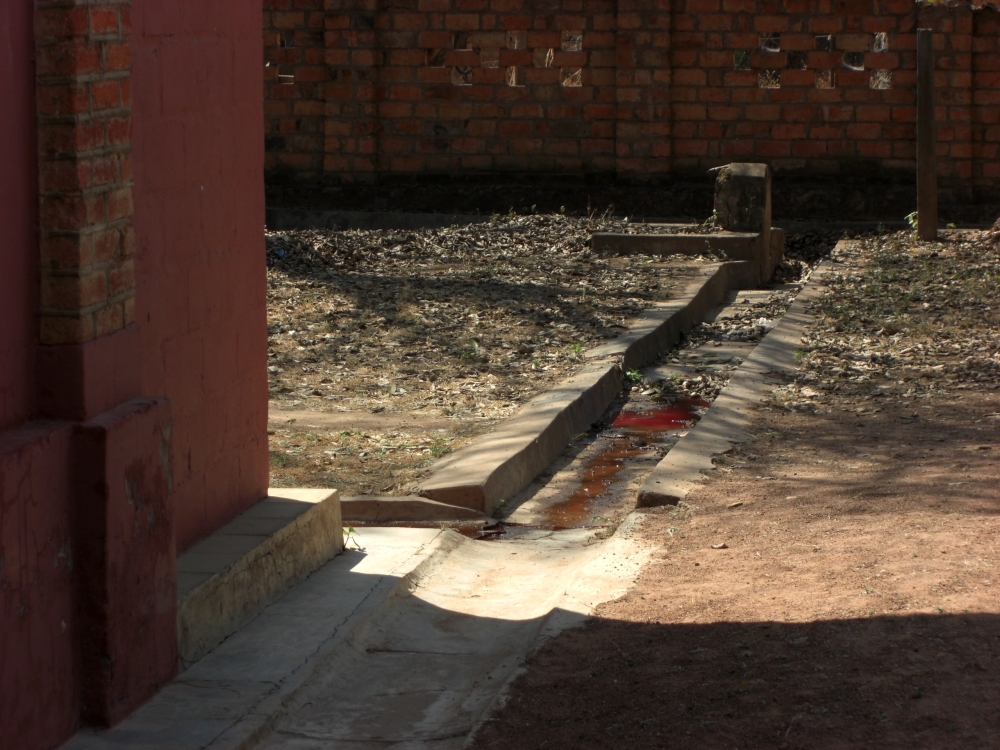 except for the blood leaking from the surgery center

USAID really gets around

a local woman offering a snack to passersby

After our tour we were shown to our seats, in the second row just behind the Ambassador from Belgium and his crew. We were offered beer or water while waiting for the festivities to begin. Children began to gather around and pose for pictures.

one thumbs-up and two karate punches 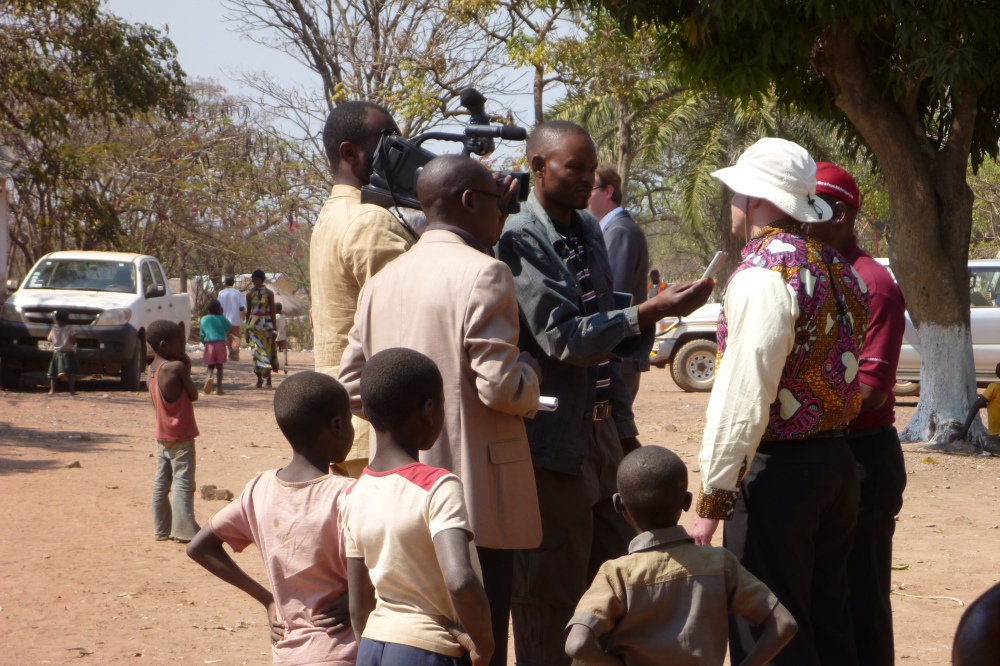 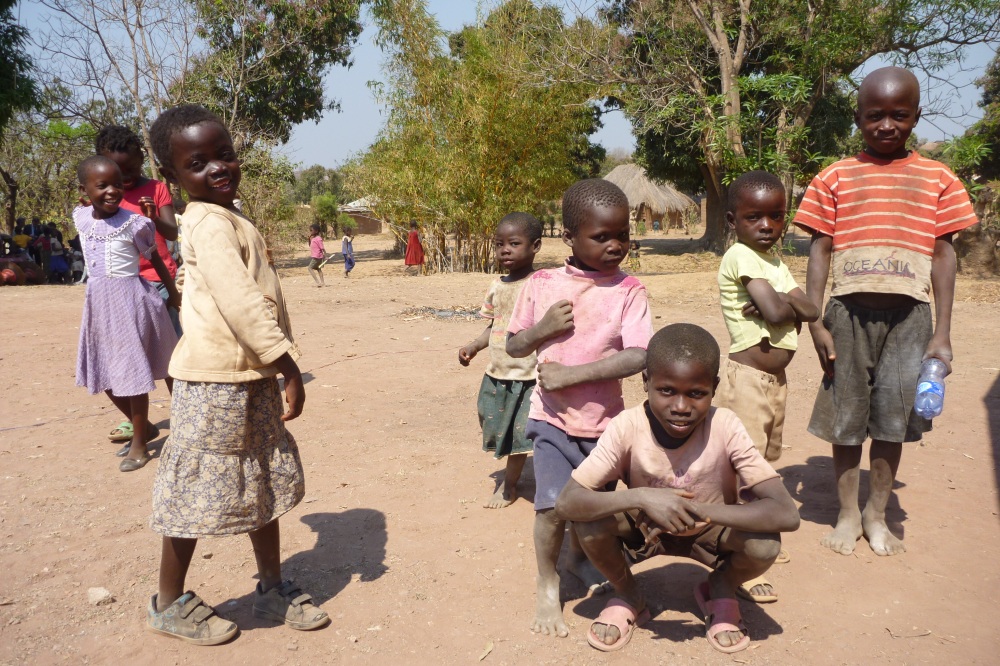 more ninja-like posing for me

Finally, the festivities were ready to begin. The Mwami was being carried down the road on his throne from a hillside nearby, where — if I understood correctly — he spent the night consulting the spirits of ancestors. The crowds followed him around town, singing, chanting, and firing very loud rifles that made me and the children who surrounded me cringe every time.

the Mwami descending from the hillside 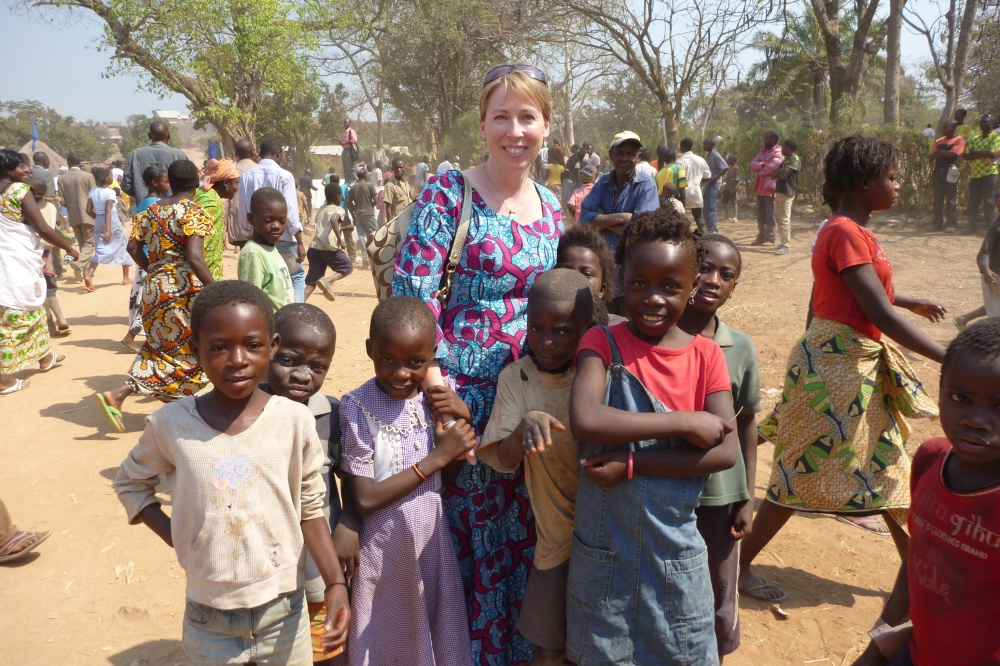 me and my buddies for the day

watch where you point those things!

Eventually the procession came to rest and we took our seats again. There were some formalities involving gifts and presentations to little huts representing the ancestors, then the Mwami took his place with his family in front of us. Lots of singing and fantastic dancing ensued. Each group of visitors took turns presenting themselves to the Mwami, and I remember feeling inadequately prepared for this yet extremely welcomed by the family anyway.

one of many dances

the Mwami and his family 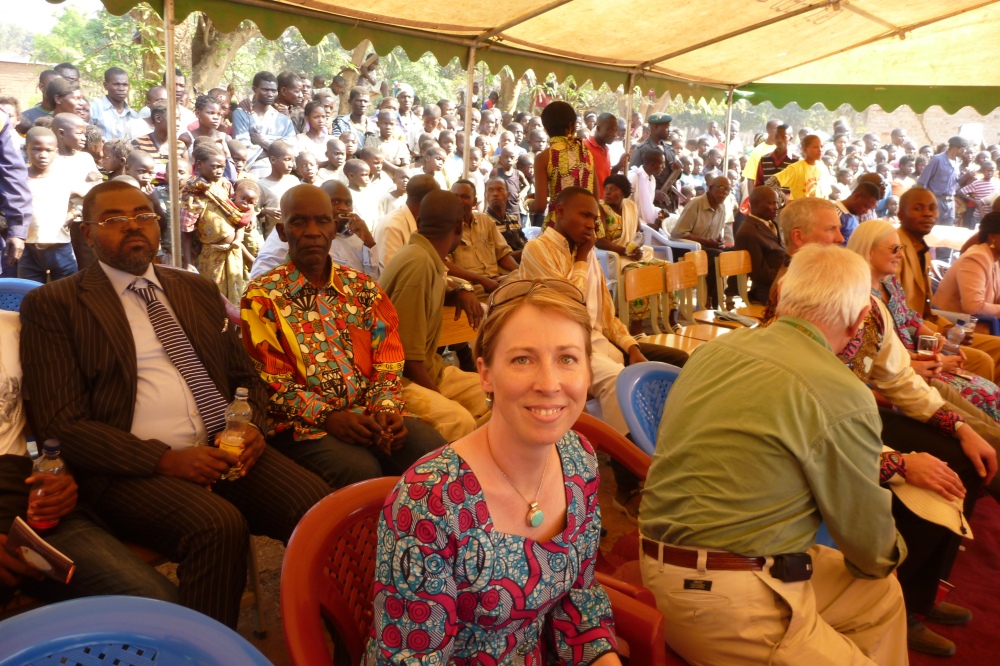 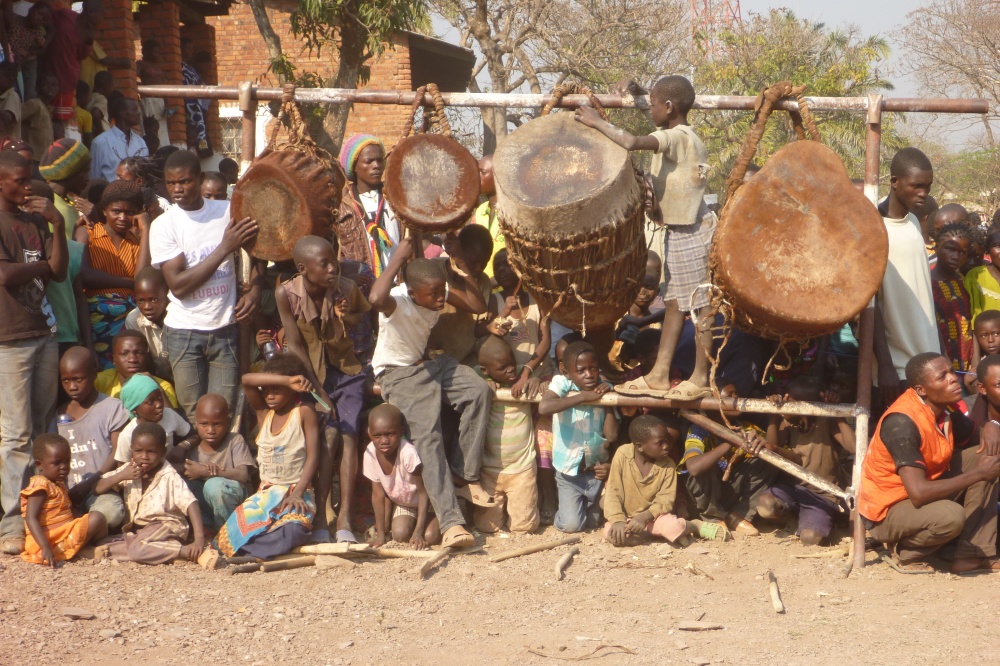 drums — and kids — plus a Rastafarian or two

After the celebration, we boarded our bus again and went out to the cemetery on the edge of town. More speeches that I could not follow in my elementary French, plus my mind was starting to wander from hunger and heat. I remember a cameraman wearing a shirt that says “I heart China” and a re-enactment of an argument. I believe we were at Munema, the location where M’siri was assassinated. We were a bit confused at the time because this tombstone says “Mushidi” instead — but my helpful friend Wikipedia now tells me that this is a variant spelling of M’siri.

A bit more time passed, then finally, at 5pm, we sat down for lunch. It was tasty, I recall a good selection of grilled chicken and fish and salads. One of the Mwami’s sisters sat down with us. She was elegant and friendly, and we were surprised to hear her speak perfect English. She said she (and her brother as well) spent many years abroad, attending university in Paris and Boston. She described being called back to the homeland, making a bit of a personal sacrifice for the needs of the family and continuing the important traditions. I liked her.

the canteen, far from Boston

Seb put together a short video of our day. The dancing of the folkloric group towards the end gives me goosebumps every time!

At last, it was time to head home. Another long, bumpy, dusty drive, but we felt extremely content after this long day, and proud that we were able to see and experience this event.

a quick security check of our vehicle, for what I don’t know 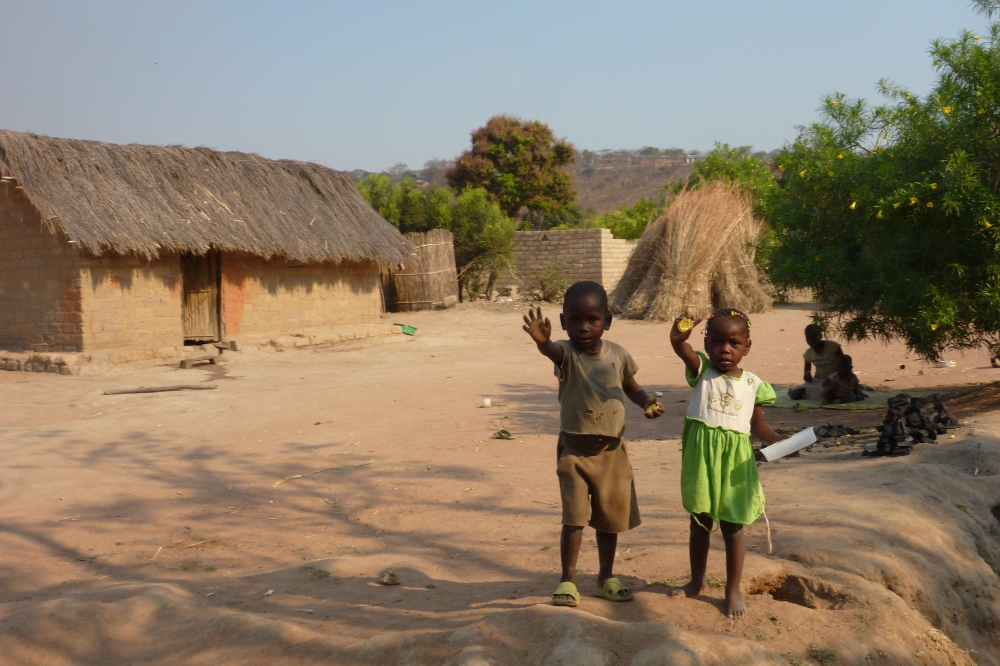 bye! come back and see us next year!