Yes, another year has gone by. Yes, we are still alive. YES, I know, I’ve been extraordinarily quiet. Part of that — a large part of that — is that I’ve been feeling somewhat “censored” in what I can comfortably share. A year ago we hadn’t yet noticed much difference under the new management; today that is no longer true. A year ago we were hoping to hang on until our 10-year anniversary; today we’re not sure about next month. Nor whose choice that will turn out to be. Suffice it to say that a lot has been changing around here, and that we miss all the friends we’ve known during our nine years here in Congo, especially now as the number of remaining expats is at an all-time low.

In the spirit of our annual year-in-review, here’s a photo (or three or four) from each month. It’s been a quiet year, not a lot of movement beyond our home in Bravo camp that didn’t involve two feet or two bicycle wheels, but with “Congo eyes” I can see a lot of variation in the landscape from month to month. We still get to enjoy our travel benefits, too, but each time we return from an amazing vacation, I’m grateful to find it’s still rather easy to take a lot of pride and pleasure in the littlest things. That’s probably one of the biggest lessons living here has taught me. How nice it can be to just slow down and keep things simple.

Scorched earth and tough-as-nails shrubs towards the end of the dry season in October last year. This is one of my favorite biking trails, called Windy-Windy for how it winds around lots of termite mounds, sausage trees, and fields of corn and cassava.

A pop-up charcoal-making factory just outside our gates. According to USAID, the DRC has one of the lowest rates of electrification in the world at 9%, with 1% in rural areas and 19% in urban areas. We’re an outlier at Bravo camp, and this particular housewife is grateful for that.

Squeezing in the 2018 Potjie Contest in October, a bit later than usual, with a South African team taking their rightful place as winners for the second year in a row. 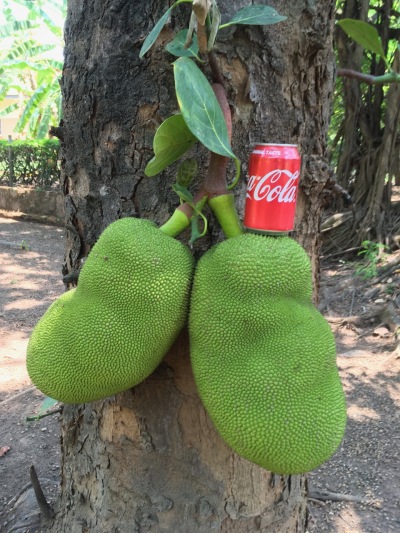 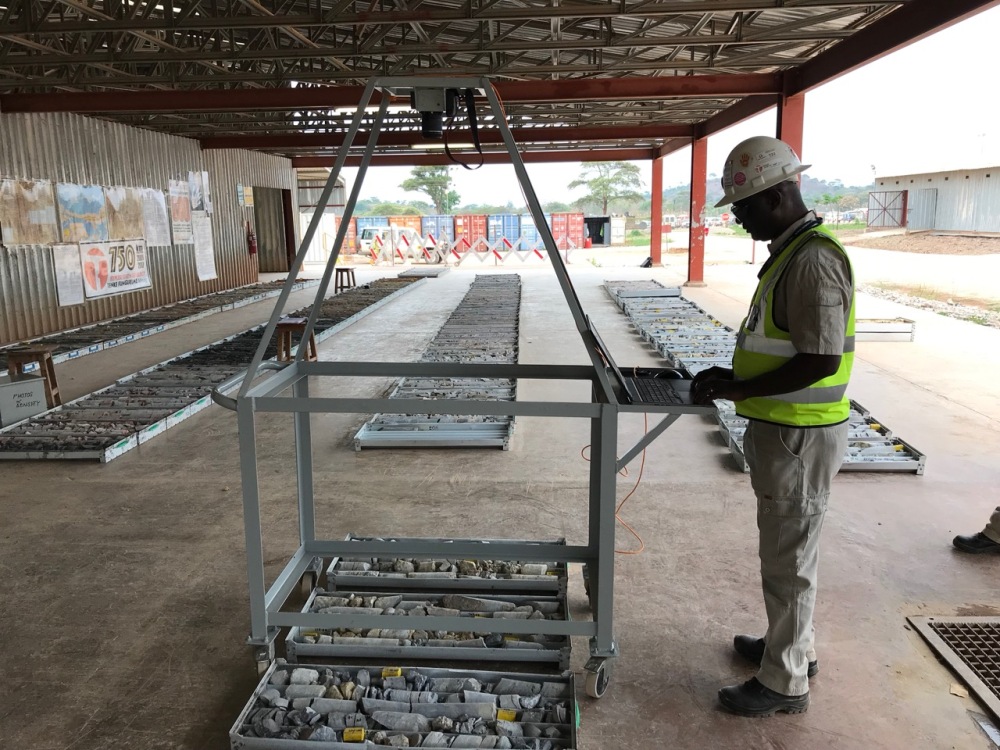 Seb bought a fancy camera system for logging core, and then came up with this rig to make it even easier. Do I hear consulting contracts lining up?

Eating michopo (grilled goat) on a Lubumbashi street with friends in November. Our once nearly-monthly trips have turned into an annual treat, if we’re lucky. 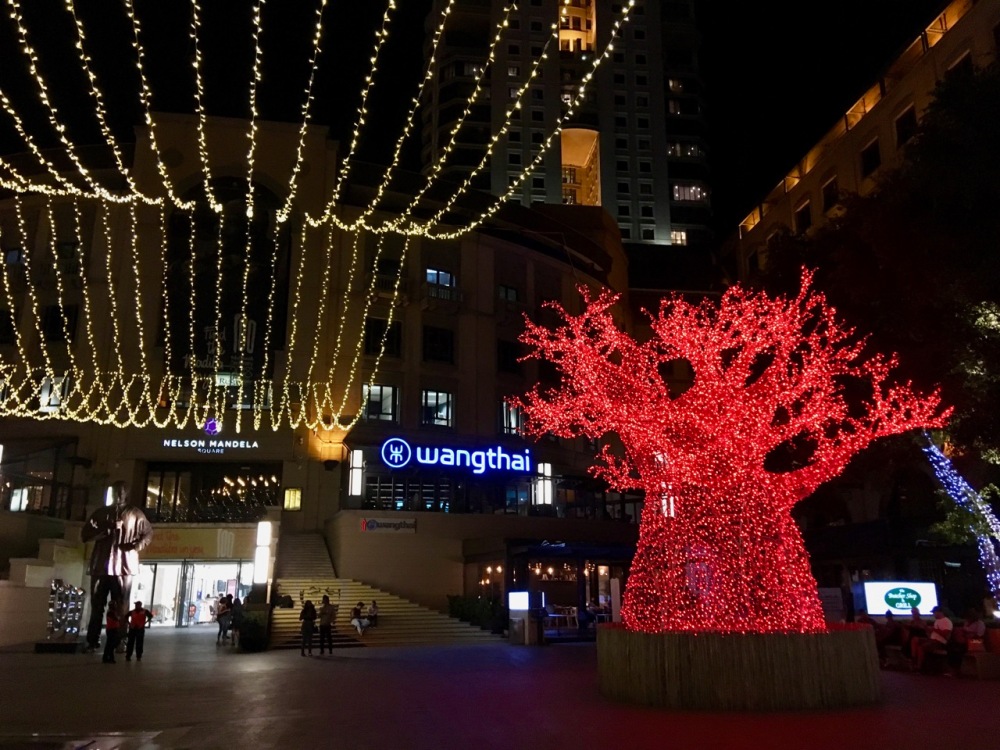 Festive Nelson Mandela Square in South Africa, a quick stop on our way to India & Maldives for Christmas vacation. 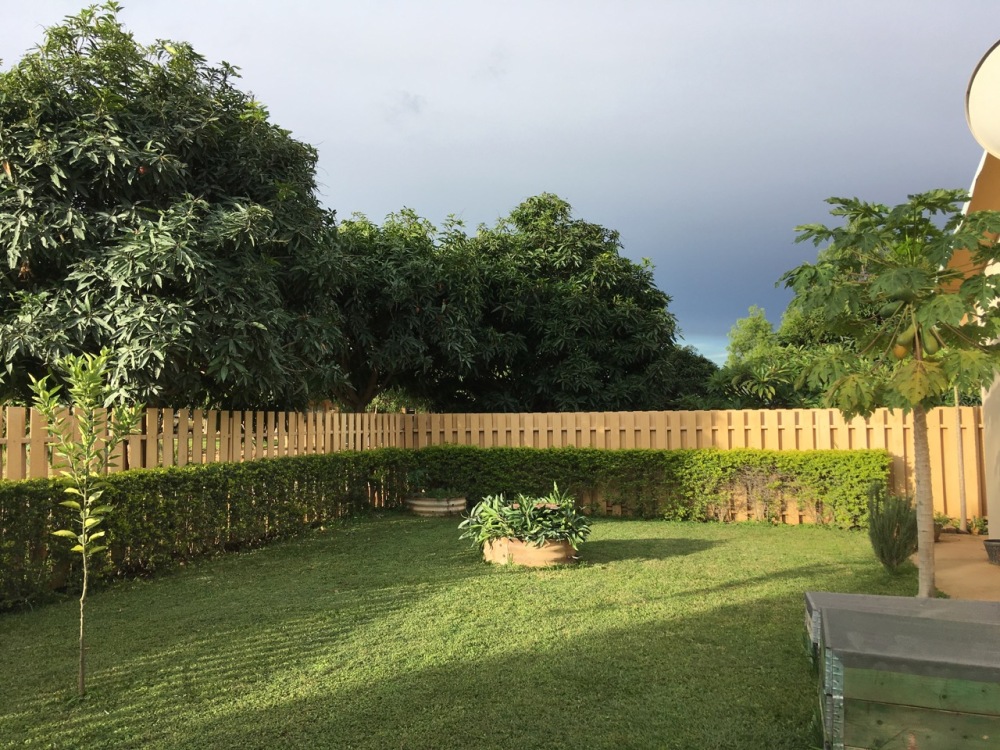 The green rainy season is in full swing upon our return in January. All the November-December mangoes are gone, but our papaya tree is the year-round gift that keeps on giving. Behind it is a rosemary transplant from a friend that’s also doing well, in front are homemade bins full of kale, and across is our 2-year-old lemon tree, still growing but not yet producing.

February is guava season! Making jam for the first time in several years, and missing the friends I used to make it with.

Friday night sundowners at the golf course, always at risk of a downpour in February.

Celebrating Chinese New Year in February. Most of these lanterns ended up caught in trees or bushes, as the head of the fire crew who didn’t get a heads-up was not happy to see. Thankfully, everything is well-saturated this time of year.

A February video of intense frog song at a watering hole, saying ‘hello’ to a fellow biker, and cement slabs of The Great Wall about to be constructed.

Sunset under a lucky tree at the golf course in March. 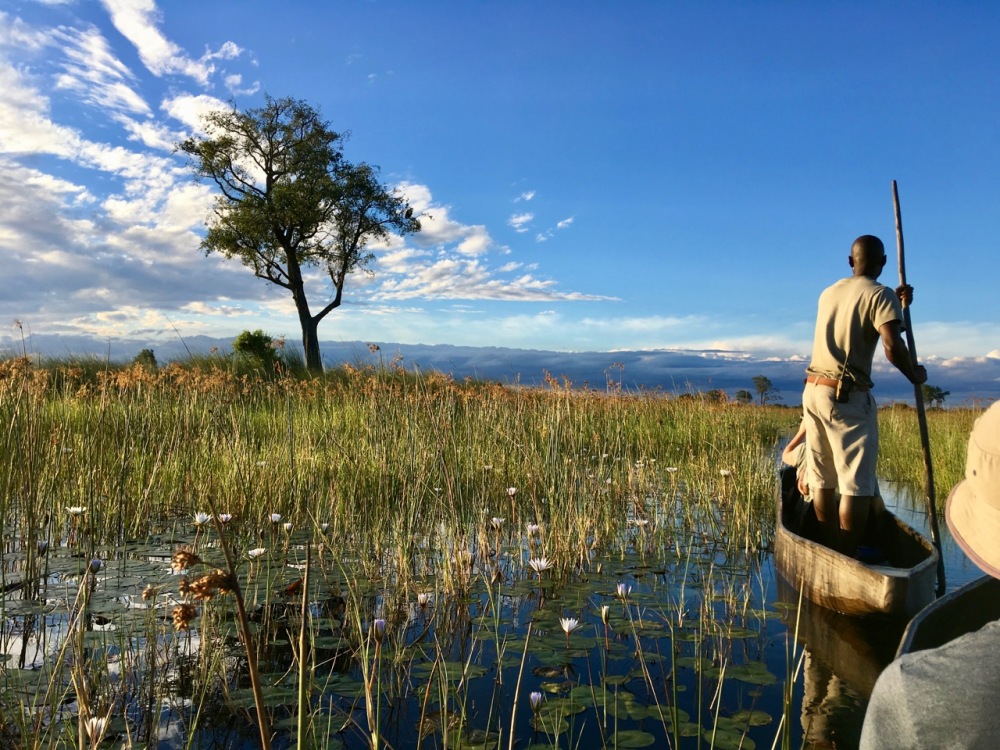 A mokoro safari in the Okavango Delta in April. (It’s not Congo but hey, Botswana isn’t too far away.)

Wandering Whiskey Wednesday in our friends’ backyard in May.

Seb’s department celebrating 1,000,000 meters drilled in May. He designed this one to resemble a drill bit, albeit a colorful one.

A few weeks after the last rain, it’s already dry enough in May to set fire to the bush. Farmers here still use a slash-and-burn technique, and it always amazes me how quickly the lush bush grows back, how the grown trees survive, and how the fires seem so well controlled. The technique supposedly kills weeds and pests and enriches the soil, but it’s not without a lot of controversy.

A dusty bike ride in June. Apparently the “Keweseki” brand comes from Angolan resellers of Chinese products. You know, like “Tmibanlerd.” 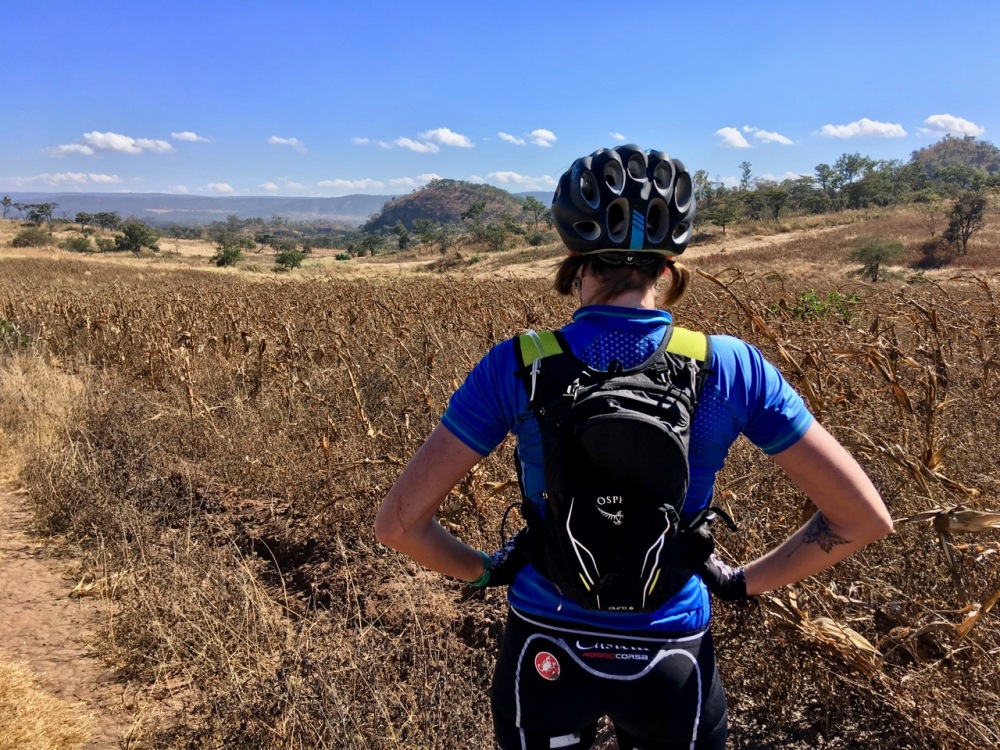 Seb hosted the 2019 Potjie Contest early this year (in June) before too many more people abandoned ship. The South Africans won again, obviously having had lots of practice!

A video of local musicians & dancers celebrating Congo’s 59th year of independence. We’d either like to make it to the 60th, or hire these guys to play at OUR retirement party.

A backyard screening of Office Space in July, under the papaya tree. That movie never gets old.

Returning in August after a fantastic vacation visiting family in Kansas and Québec, yesss that papaya tree is still going strong!

And thank goodness for that, since THIS is the fruit & vegetable selection at our one and only grocery store. Onions, potatoes, garlic and sometimes ginger root are in a different part of the store, otherwise THIS IS IT. (Please go thank your local grocer today!) 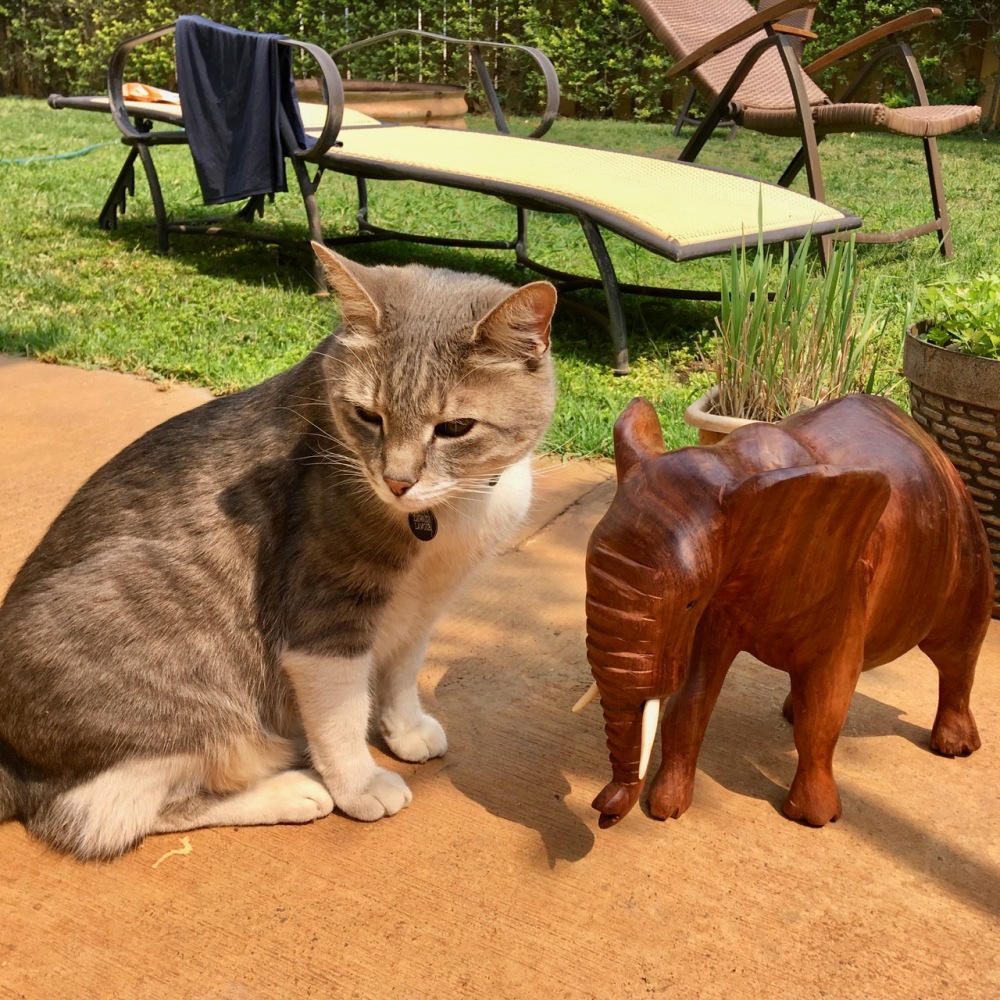 September 1, 2019: The morning of our ninth anniversary in Congo began with a hot, dry, and deforested bush walk, and ended with a surprise purchase… this cat-sized elephant, carved out of local red wood by a villager who was hoping to make a few bucks, and who ended up making our day.

For previous year-in-review stories, see The Complete Tales. For more info on the potjie contest and past winners, see Picking Potjies; for the incredible origin story of our papaya tree, see First Harvests; and for the Tmibanlerd story, see Made in China. 😉